I was riveted by Cristian Mungiu's new film Graduation. It is a heart-felt punch at what it means to live in a corrupt society in which everyone participates. A high school student in Bucharest gets attacked in front of her school, just days before the national final exams, so important for her to keep her scholarship for Oxford. Shaken, she is in no condition to take these exams. Her father, a doctor, sees his daughter's chances to leave Romania dashed.

The doctor is an ethical man, who raised his daughter to be "honest."

Will he too bow to the system and pull strings to save his daughter from what seems a prison sentence: a life in Romania?

Everyone else seems to do it. They bribe doctors to get medical help, call friends to exchange personal favors. Why not him?

The movie is as tense as a thriller. The question is not only how far the doctor will go. From the first scene, where a rock smashes the window of the doctor's family apartment, aggression is omnipresent. It can come from anywhere. As the doctor walks alone through a dark parking lot at night, we fear he will be attacked. One morning, the windshield wipers on his car are twisted. Is someone stalking him? Could someone he knows be out to get him?

Or is this just the paranoiac atmosphere that results from living in a society of distrust? 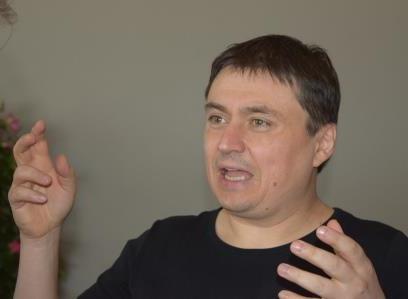 "Paranoia is a good word," Cristian Mungiu nodded, as we sat together in the Ambassador suite of the Cannes Palais.

"There is anxiety when you feel guilty about the decisions you make: when not all the decisions you make are moral, when you are hiding the truth from others. You will have the illusion that people are following you, that your conscience is always behind you. This is what it means to take the wrong step into the world of compromise: a lot of aggression and anxiety. Compromise starts really early in Romania. There is always conflict when you accept compromise. And once it starts it is unstoppable."

The film gives a striking portrait of what it means when a country goes south.

Every character seems to be burdened by an invisible weight. The doctor's sensuous mistress never smiles, not only because of her unstable role as a mistress. The police officer in charge of the investigation shrugs with resignation. The high school girl only smiles once in the film--an eerily disturbing smile.

"Many people are depressed in Romania," opined Mungiu. "We are surrounded by people who are depressed, not because of anything personal. It has something to do with society in general."

His film is a strong plea to change that society. Throughout our interview, he spoke often about "solidarity". He noted with passion that when you act selfishly, "at one point it will get back to you."

"If you tolerate your own compromise you will tolerate the compromise around you. You will lose the moral power to speak out, because deep inside you know you have done something that is not so moral. We all complain in Romania about the level of corruption without understanding that we are responsible for it."

The reason the film is called "Graduation" is because the major suspense of the film is whether the girl will pass her exams--with the help of strings pulled--and get the hell out of Romania.

Are people in Romania really so desperate to leave?

"We have lost ten percent of our most brilliant youth in the last decade. Parents want to send their children abroad. The top students are accepted abroad to study [just like the girl in the film] and go. It is a problem. It is a problem if all the trained and intelligent people leave the country."

The director himself has never thought of leaving his country.

"I want to make films that are deep and truthful, about what I know. You can't understand the people in another country like you do those in your own country. An immigrant can never know or integrate into a culture [as well as a native], except after many years. So I must stay to make my films."

Graduation ends with a brilliant twist--and one of the most emotionally intense closing shots of any film I have ever seen.