So far, Jacques Audiard's Un Prophete is the favorite at Cannes. The violent story of a young poor defenseless thug who ends up in jail for a minor crime, only to become -- through the brutality of prison life -- a hardened murderer; its appeal lies, above all, in its lack of morality. "Your film has no message," I said to Jacques Audiard after the screening, as he faced me on a terrace overlooking the bright Cannes bay. "It is refreshingly free."

"Of course it has no message," quipped Audiard, a wiry fast-talking dynamic Frenchman, while he unpeeled a pill from a packet and jumped up to ask for a glass of water. "It is cinema. Cinema like Cronenberg's A History of Violence. I couldn't get into Scarface, for example, because Al Pacino was so clearly a villain. In my film, I wanted to make a nice guy just like you and me, who also kills. So you can identify with him. Keep away from black and white moralizing."

He added that no, this film has nothing to do with his vision of society. "It's fiction," he said, pointing at his head. "It comes from nowhere."

Inspired nonetheless from a "moral" situation (Audiard had screened a film to prisoners in France and shocked by the conditions, decided his next film would be in a prison), the film still manages to avoid sentimentality or commentary. The thug, played by a young unknown actor, quickly learns he can survive prison-life only by becoming the right-hand hit-man of his fellow prisoner, a Corsican mafia boss.

What follows are two and a half hours of tense violence: throat-slashing, beating, and (while on prison-leave) car shoot-outs, all without one moment of reflection.

The tempo is intense.

I had met Audiard before, for his The Beat My Heart Skipped, and while watching this new film, I could not help perceiving the man's jumpy nervous energy -- this live pulse -- behind the camera: the main reason the film is so successful.

"How do you accomplish that?" I asked. "The transposition of your energy on film?"

Audiard told me at first that he had no idea, but then commented that his forte might lie in directing the actors. He hated all aspects of shooting (his pleasure lying in scriptwriting), except when it came to pushing the actors to unleash their energy on the set, pushing them together and watching them charge off "like a train heavy with freight."

The famous French actor -- Niels Arestrup -- playing the Corsican boss, agreed that directing actors is Audiard's remarkable talent. "I have been acting for forty years," the white-haired man said, staring steadily with his blue eyes. "And I have rarely come across a director like Audiard who understands the art of acting. He knows how to tell us, 'that is terrible; make it better. Go further!" Audiard also gave him the metaphor of a "lion playing with his food" when he directed him on how to act with the new boy in prison.

Niels added, with chagrin, that he now took little pleasure in cinema, because "there are few Audiards."

I personally also enjoyed the sets: the strange atmosphere of the prison -- the cooped up cells, the heavy steel doors. Indeed, it turns out that the prison itself was just a set, constructed for the occasion.

Quentin Tarrantino, in the audience at the premiere, also loved the film. "We observed him in his chair," said the actor Tahar Rahim who played the thug. "He was exclaiming, moving his hands, and enjoying the film like a child!"

The only off-putting aspect of the film (aside from an extra half-hour of gangster violence that, in my opinion, could have been cut) is the title: "Un prophete" in French means simply "he who could tell the future." It need not have any of the spiritual nuance (i.e. Jesus or Mohammed) of the English homonym. It is a confusing slippage of translation (and the title in English will surely be different), as the film clearly has no spiritual subtext.

"Yes, the prophet is just a prophet!" laughed Audiard. "As for Jesus or Mohammed, I don't 'eat that kind of bread.'"

"And your ghost?" In the film, a kind-hearted victim of the young man's violence comes back a ghost in the boy's dreams -- a Banquo without Banquo's significance. "He is so clearly not a conscience."

"Of course not. He is a ghost! In the English tradition. A ghost is just a ghost, a common presence, banal. As banal, in fact, as a prophet."

Audiard trailed off in laughter and jumped up for his next interview. 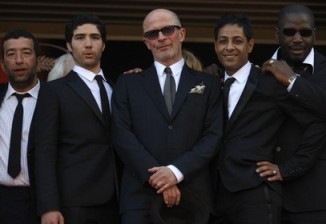