An armed robber stole millions of dollars worth of jewels at a hotel in Cannes, officials said.

According to the BBC, the theft took place on Sunday at the jewelry exhibition Carlton Hotel. The stolen gems are worth around $53 million, the AFP reported.

According to The Independent, the heist took place in broad daylight. Local news media said the thief escaped with the stolen jewels in a briefcase.

This is the third major jewel heist this year to take place at Cannes, the site of one of the world's most prestigious film festivals. During festival in May, $1.4 million worth of gems were stolen from a Swiss jeweler. Later in the week, a diamond necklace worth $2.6 million was taken.

Oddly enough, the Carlton hotel is one of the major locations in 'To Catch A Thief'-- the classic Hitchcock film about a retired jewel thief.

Here's more on Sunday's heist, from the AP:

PARIS — A staggering 40 million euro ($53 million) worth of diamonds and other jewels were stolen Sunday from the Carlton Intercontinental Hotel in Cannes, in one of Europe's biggest jewelry heists in recent years, police said. One expert noted the crime follows recent jail escapes by members of the notorious "Pink Panther" jewel thief gang.

The hotel in the sweltering French Riviera was hosting a temporary jewelry exhibit over the summer from the prestigious Leviev diamond house, which is owned by Israeli billionaire Lev Leviev.

A police spokesman said the theft took place around noon, but he could not confirm local media reports that the robber was a single gunman who stuffed a suitcase with the gems before making a swift exit. The spokesman spoke on condition of anonymity because he was not authorized to discuss the matter on the record.

The luxury Carlton hotel is situated on the exclusive Promenade de la Croisette that stretches a mile and a half along the French Riviera, and is thronged by the rich and famous throughout the year. The hotel's position provides not only a beautiful view of the sea but also an easy getaway for potential jewel thieves along the long stretch of road.

"It's a huge theft. Anytime you talk about a heist with many millions of dollars it turns heads and feeds the imagination," said Jonathan Sazonoff, U.S. editor for the Museum Security Network website and an authority on high-value crime.

He said the likelihood of recovering the stolen diamonds and jewels is slim, because thieves can easily sell them on. "The fear is, if you're dealing with high quality minerals, it's hard to get them back," Sazonoff said. "They can be broken up and so they can be easily smuggled and sold."

The valuable gems were supposed to be on public display until the end of August. It was not immediately clear how many pieces were stolen.

Several police officers were placed in front of the Carlton exhibition room – near a Cartier diamond boutique – to prevent the dozens of journalists and photographers from getting a look in at the scene of the crime.

Hotel officials would not comment, and attempts to reach Leviev or his company were not immediately successful.

Europe has been struck by several brazen jewelry thefts in recent years, some of which have involved tens of millions of dollars in treasure.

On Feb. 18 in Belgium, some $50 million worth of diamonds were stolen.

In that heist, the stones from the global diamond center of Antwerp had been loaded on a plane headed to Zurich when robbers dressed in dark police clothing and hoods drove through a hole they'd cut in the Brussels Airport fence in two black cars with blue police lights flashing. They drove onto the tarmac, approached the plane, brandished machine guns, offloaded the diamonds, then left in an operation that took barely five minutes.

Authorities have since detained dozens of people and recovered much of the stolen treasure in that operation.

Five years ago, in December 2008, armed robbers wearing women's wigs and clothing made off with diamond rings, gem-studded bracelets and other jewelry said then to be worth $108 million from a Harry Winston boutique in Paris.

As Christmas shoppers strolled outside, the gunmen forced store employees to strip rings, necklaces and earrings from window displays and pull more out of safes – a brazen robbery that took place in the presence of security guards and security cameras in one of Paris' toniest shopping locales.

Also in 2008 – in February of that year – in a scene reminiscent of the movie "The Italian Job," masked thieves drilled a tunnel into a Damiani jewelry company showroom in Milan, Italy. They tied up the staff with plastic cable and sticky tape, then made off with gold, diamonds and rubies worth some $20 million. The robbers had been digging for several weeks from a building under construction next door.

Cannes appears to be the favorite target this year – in May it was struck by other two highly publicized jewelry heists during the Cannes Film Festival.

In the first theft, robbers stole about $1 million worth of jewels after ripping a safe from the wall of a hotel room. The jewelry was taken from the Novotel room of an employee of Chopard, the Swiss-based watch and jewelry maker that has loaned bling to A-list stars walking the red carpet at the film festival.

In the second, thieves outsmarted 80 security guards in an exclusive hotel and grabbed a De Grisogono necklace that creators say is worth 2 million euros ($2.6 million.)

Sazonoff said it's normal for robbers to gravitate to a place like Cannes, whose glimmering harbor and glamorous film festival attract the world's rich and famous. "Why do thieves target Cannes? It's simple ... On the Cote d'Azur, it's where the monied people flow," he said.

On Thursday, a member of the gang escaped prison after accomplices rammed a gate and overpowered guards with bursts from their AK-47s, police said. Milan Poparic fled with fellow inmate Adrian Albrecht from the Orbe prison in the western Swiss state of Vaud.

Police say the Pink Panthers network's members are prime suspects in a series of daring thefts. According to Interpol, the group has targeted luxury watch and jewelry stores in Europe, the Middle East, Asia and the United States, netting more than (EURO)330 million (>285m) since 1999.

Poparic is the third member of the Pink Panthers to escape from a Swiss prison in as many months, according to Vaud police.

"The brazen drama of it is their style... The possibility of the reemergence of the Pink Panther gang is very troubling and taken seriously by law enforcement worldwide," Sazonoff said. "The theft of high value diamonds is exactly what they do, so it's not a great leap to assume they are on the warpath again. They are a crime wave waiting to happen."

Thomas Adamson can be followed at Twitter.com/ThomasAdamsonAP 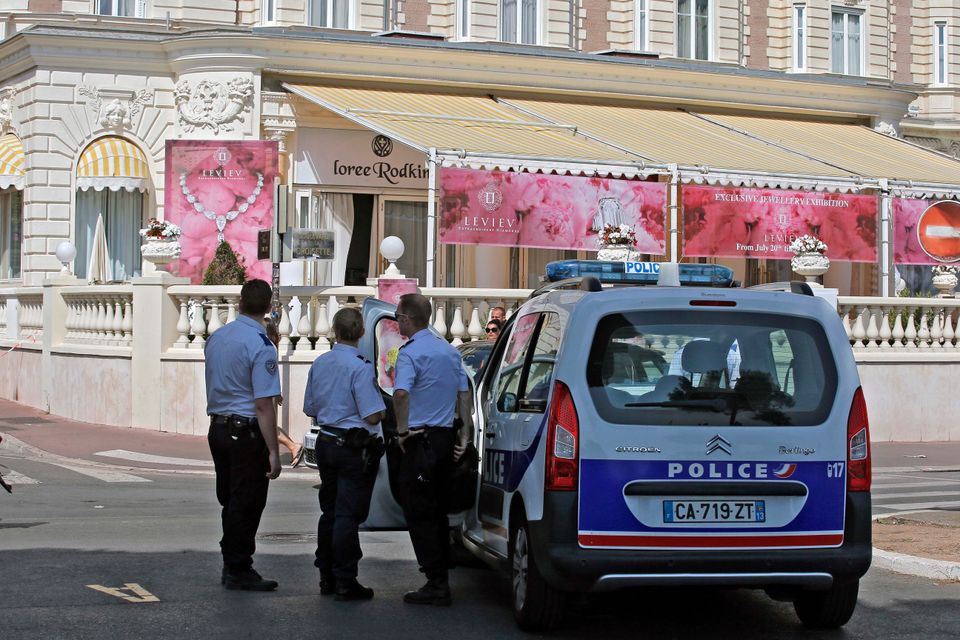 1 / 4
Police outside the Carlton hotel, in Cannes, southern France, the scene of a daylight raid, Sunday, July 28, 2013. A staggering 40 million euro ($53 million) worth of jewels and diamonds were stolen Sunday from the Carlton Intercontinental Hotel in Cannes, in one of Europe's biggest jewelry heists recent years, police said. French Riviera hotel was hosting a temporary jewelry exhibit over the summer of the prestigious Leviev diamond house, which is owned by Israeli billionaire Lev Leviev. (AP Photo/Lionel Cironneau)
AP