Just like the rest of us, corporate executives and board members have some tough choices to make about how to spend the company's money. Or, I should say, our money.

A public company sells stock to outside investors, meaning those of us with pensions and 401(k) plans and mutual funds. Its primary obligation by law and presumably by market forces is to find the best use for that money to create long-term value for shareholders. Of course, they cannot create that value over the long term without attending to the needs of customers and employees and being careful about obeying the law. With that in mind, the executives and directors design the strategy. They have to decide whether the money will be spent more effectively on research and development of new products or on marketing the old ones.

Recently too many companies have opted for a third option -- buying back their own stock. A report issued this week from the Investor Responsibility Research Center Institute and Tapestry Networks found:

There are valid reasons for companies to buy their stock, especially when they have excess cash and the stock price is substantially below their internal valuation. If the executives do not have a better use for the money, they should return it to shareholders and let them invest somewhere else. But stock prices are high right now. In buying back their own stock, CEOs are telling us that they can think of no better place to spend the company's profits than buying their own shares while prices are at record highs. Gretchen Morgenson of the New York Times calls the positive impact on the stock price a "growth mirage." 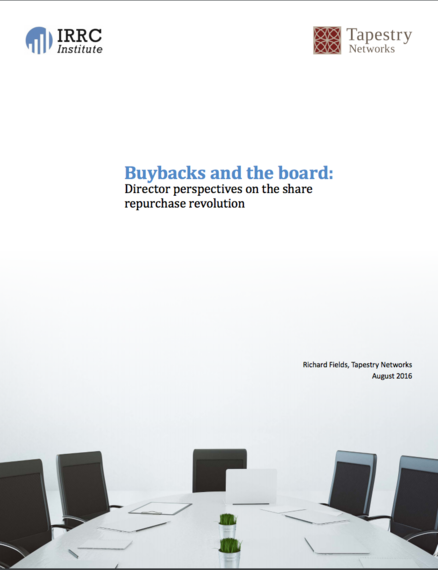 The increase in buybacks is a warning sign for three reasons. First, it should be a concern that executives do not have any better operational or strategic ideas for creating sustainable, organic growth. We'd rather have them return capital to investors than to overspend on acquisitions. But we invest in these companies because we believe in their business plans and if they cannot find a use for the capital, they owe us an explanation that has to go beyond financial engineering tied to quarterly numbers.

The second concern is that buybacks suggest that boards of directors have approved incentive compensation plans that promote buybacks even when they are not in the interest of shareholders. If they set performance goals in terms of earnings per share, there are two ways to hit the number: higher earnings or reduced number of shares. Boards should make it clear that they reward only higher earnings. The IRRCi/Tapestry report found "Although a number of directors mentioned that their companies project how buyback activity will affect EPS and adjust targets accordingly, only 20 S&P 500 companies disclosed that they did so."

While compensation consultant Ira Kay acknowledges that executives with more stock options implement more buybacks, he insists that it did not diminish the returns to shareholders over the four-year period he studied. Over the longer term, however, the effects may not be as benign, as the money used for buybacks is not being used for improving operations.

Between 2003 and 2013, S&P 500 companies doubled their spending on share repurchases and dividends. But, at the same time, companies cut spending on investments in new plants and equipment.

A third warning sign is the shift in where the money for these buybacks is coming from. Increasingly, it is not excess cash but debt. David Ader writes in Barron's:

The bond market should be concerned about stock buybacks, but not because of their bullish effect on share prices. Instead, bondholders should be anxious about where the cash to pay for them comes from. It isn't widely appreciated that the money has been borrowed in the credit markets, and that the borrowers have taken on a large amount of debt to support the buybacks.

It is one thing to return excess cash to shareholders if executives have no strategic ideas, though it raises questions about management's judgment and the company's future prospects. But it is harder to understand a decision to take on debt to purchase the company's own shares, a maneuver with short-term gains but significant long-term risks.

Directors interviewed for the IRRCi/Tapestry report justified using debt to buy back stock because US tax policies and low interest rates have made cheap and easy to borrow money.

The large build-up of capital in non-US affiliates means that companies have an emergency fund to draw upon should it become necessary. As a result, creditors offer very attractive loans to companies, meaning some corporations are able to engage in almost costless borrowing to fund buyback programs.

The directors IRRCi/Tapestry interviewed insisted that "their companies can afford both buybacks and adequate investment. They listed the usual justifications for buybacks,

Many directors said that they would be unlikely to find enough good opportunities to invest all their companies' available capital in today's low-growth, low-interest-rate environment, and that it was often better to return capital to shareholders than to hoard capital or invest in projects with less-than-desired projected returns. Directors also said they tend to prefer buybacks to dividends because they believe a buyback program offers greater flexibility over time.

IRRCi executive director Jon Lukomnik says, "A trillion and a half dollars in buybacks over three years certainly returns capital to shareowners and reduces the number of shares outstanding. That's why buybacks are popular. But, some view buybacks as financial engineering to juice short-term corporate performance at the expense of investments that would better grow companies and the economy over the long-term."

The report's most significant recommendation is for improved disclosures about share repurchase programs, noting, "Few companies publicly disclose details about buyback decision-making and very few state the reasons for a specific buyback program." Concerns about misaligned incentives and the increased use of debt shift the burden of proof to require much more specific disclosure about the process and calculus used to quantify the benefits of buybacks. Shareholders need to know whether they are getting their money's worth from buybacks and from the executives and directors who approve them.