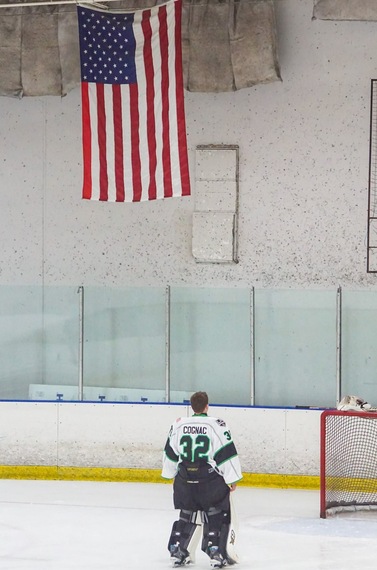 There is an old saying "united we stand, divided we fall." I thought about that last Saturday as I watched my son Gabriel's high school ice hockey game. Like almost every sporting event in the U.S., the national anthem is played before the game starts.

In this game, a man walked out onto the ice holding a microphone to sing the national anthem . I looked around to see if there were any "protests" but there were none. Every single person in the stands got up out of the seats and stood in respect for our country. Every player on the ice, stood at the blue line or in the goal and faced the flag of our great nation.

I looked at the faces around me and the faces of the players on our team. Our team, the Torrance Destroyers are a reflection of America and what makes it great, it's diversity. Asian, Hispanic, African American, Armenian and Caucasian. Catholic, Baptist, Jewish, it didn't matter who they are or where they were from because at that moment they were reminded and acknowledged that they were Americans.

Our nation is so divided, so polarized and so quick to blame others and so quick to hate. We seem to have forgotten what its like to be "united" and stand together to celebrate what makes our nation so great.

These kids and all the parents in the crowd all stood united for 120 seconds. They all stood as one, acknowledging that despite our differences , we are a great nation. I ask you America, can't we all just stand together ,put aside our hate and be united for just 2 minutes.

We still have a lot of work to do as a nation, but if we can all just stand together and united for 2 minutes, then we have hope that we can stand strong as a nation in spite of our differences. So just give me 2 minutes America, then you can go back to hating each other for the rest of the 1438 minutes of each day.