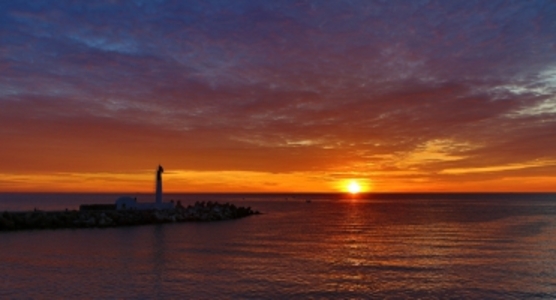 Capital outflows from emerging market economies have substantially accelerated since last year. The cycle of intense debt leveraging that took place in those economies after the 2008 global financial crisis has also started to reverse. Furthermore, 2015 was also a fifth consecutive year of growth deceleration in emerging markets.

Some analysts have taken those features as pointing to a high likelihood of a "third wave" of the global financial crisis, this time centered on emerging markets. While arguably their combination may acquire a disorderly nature and materialize systemic risks to those economies as a group - and therefore to the global economy going forward - there are also reasons to expect the significant portfolio rebalancing at play not to lead to a disruptive break. The bulk of massive capital outflows corresponds to portfolio adjustments following China's expected economic rebalancing. On the side of the other emerging markets, in turn, available foreign exchange reserves remain substantial. Furthermore, only in part the non-financial corporate debt has been used to create new assets that would now be facing low returns, as it served in many cases rather to diminish costs of funding and increase cash balances.

Capital has flowed out from emerging markets...

According to the Institute of International Finance (IIF), capital outflows from emerging markets in 2015 netted approximately $735 billion. This is significantly above the 2014 loss of $111 billion. Leading the pack of 30 emerging economies reviewed in the IIF report is China with a $676 billion loss in 2015, as others are picking up the rest of the tab. The movement out seems to have continued this year, as China's stockpile of foreign currency fell additionally more than US$110 billion in January, following a record US$107.9 billion decline in December (Shawn Donnan, FT, 02-09-2016).

Chart 1 from the IIF report puts the story in stark perspective. Outflows are expected to continue through 2016, albeit with a relative reprieve for the EMs excluding China. 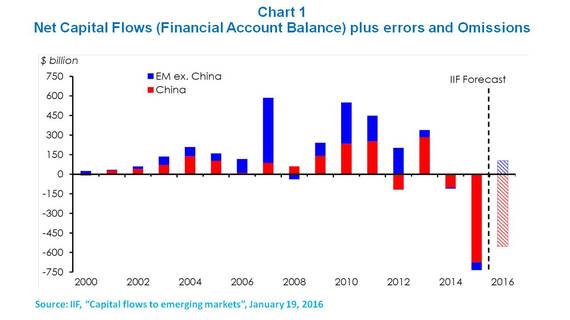 The turnaround has been particularly acute in portfolio flows (Chart 2). Even setting China aside, the impact is across the broader sample of countries covered by the IIF report. Other emerging markets are affected disproportionately vis-à-vis their economies. While the IIF forecast a possible modest reversal of portfolio flows in 2016, their own analysis suggests the positive inflows are not expected to match the pre-August 2015 levels. The end result is a situation in which capital outflows have been leading to diminishing foreign exchange reserves of emerging markets (Canuto, 2015a) - a critical defense against shocks as learnt during the 1997 Asian and 2008 crises (Semmler and Gevorkyan, 2011) - as well as to rising yields on public debt (Chart 3). 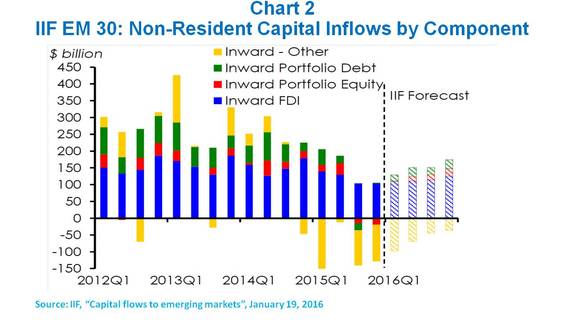 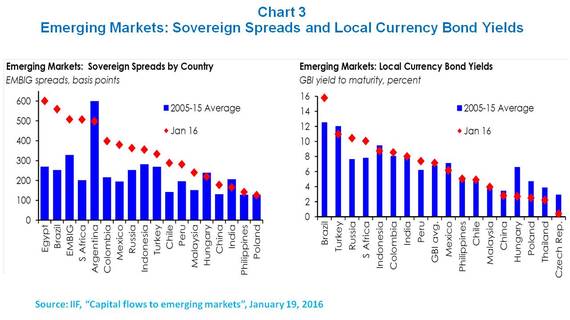 ... and the emerging markets' non-financial corporate debt binge has ended

Charts 4 and 5, taken from the HSBC report "GEMs Investor - Emerging markets: testing times" (October, 2015), depict the story of emerging market debt following a trajectory that would have supposedly lead them to a fragile situation similar to the one of developed markets on the verge of the 2008 global financial crisis. The slight decline followed by stability of the total debt to GDP ratio in developed markets after 2008 reflected the debt deleverage of households and the financial sector, in tandem with a propping up of the public sector debt and maintenance of levels on the non-financial corporate side. Emerging markets, in turn, splurged on the possibilities of a steady credit expansion particularly to non-financial corporates. The combination of clean local balance sheets in the aftermath of the crisis and ease of external finance as a result of unconventional monetary policies in developed economies underpinned such a leverage increase in a few years. 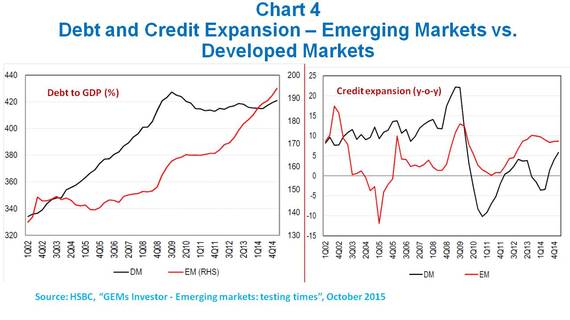 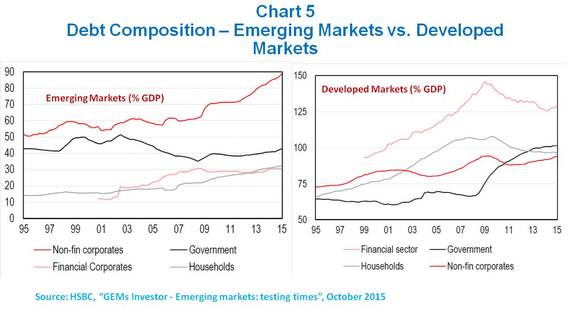 To some extent, such process was a materialization of fears expressed early on
(Canuto, January 2011)
. Instead of sparking a "switchover of global locomotives", with emerging markets and developing countries using their clean balance sheets to spark a virtuous cycle of infrastructure investments, technology catch-up and sustained growth - along which they even might partially rescue developed markets from their doldrums - the credit space and liquidity abundance served to finance domestic consumption and excess capacity in existing activities. Although working well as a countercyclical move from both emerging markets and the global economy standpoints, such a growth binge - unaccompanied by necessary structural reforms and changes in growth patterns - revealed itself to be exhaustible
(Canuto, 2013a)
(Canuto, 2013b)
. It also brought a legacy of high non-financial corporate debt (
Chart 6
). 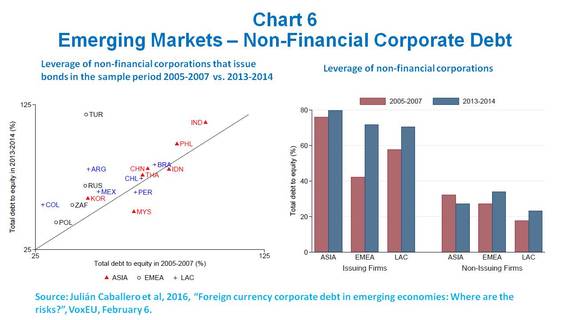 A not-necessarily disruptive portfolio rebalancing has been at play

Capital outflows and a deterioration of credit conditions to emerging markets accompanied the perception of growth deceleration, high non-financial corporate debt and the expected end of liquidity abundance generated by the US monetary policy. Yields of corporate and government bonds rose as global portfolios shifted, whereas exchange rates depreciated across the board.

Are we watching a potentially disruptive process, with runs to the exit, spiraling exchange rate devaluations across a substantial range of emerging markets, and defaults of nonfinancial corporates and/or sovereign entities with related contingent liabilities? In our view two features of the on-going portfolio rebalancing must be highlighted and observed more closely before drawing any scenario of disruption.

First, one has to reckon with the fact that China's economic rebalancing toward services and relatively away from manufacturing, as well as toward higher domestic consumption and less fixed investment - Canuto (2013c) - has been a major factor behind the global portfolio adjustment. The bulk of capital outflows from emerging markets approached above - and the recent total loss of emerging markets' foreign exchange reserves (Canuto, 2015a) - reflected to a large extent a shift of official foreign exchange reserves from the central bank to Chinese corporate and household sectors (the foreign assets of which have been reported to have increased by more than US$ 400 billion). Besides any response to expected exchange-rate developments, China's change of growth pattern has entailed a reduction of excessive debt leverage - and capacity - in those sectors losing relative weight. Outstanding dollar-denominated external debt has fallen only slightly yet but it still corresponds to roughly 25% of foreign reserves.

Shifts of official foreign reserves combined with a tacit commitment to maintain a soft peg of the Renminbi to a basket of currencies may imply a corresponding adjustment of domestic portfolios to an expected dollar appreciation. However, as long as such a process takes place in a reasonably smooth pace, it will not lead to any wave of spiraling exchange rate depreciations and corresponding upheavals in other emerging markets.

Second, as pointed out by Caballero et al (2016), the large increase in the debt of non-financial corporates of emerging markets has not all been the counterpart of accumulation of new real assets now trapped in prospects of low returns. Part of it was to substitute for costlier domestic finance. Also part of it was to explore carry trade opportunities and "behave like financial intermediaries" - see Canuto (2015b) in the case of Latin America. It is true that over-investment in commodity-related sectors, as well as in non-tradable sectors where there is no natural hedge against exchange rate depreciation remain a source of concern (Gevorkyan and Gevorkyan, 2012 link commodities trade and exchange rates). Furthermore, the availability of foreign-exchange hedge and/or public-sector contingent responsibilities may mean less vulnerability to creditor runs on the corporate side, even if leading to a transfer of risks and burden elsewhere. As Caballero et al (2016) remark, it is hard to make general statements by simply looking at aggregate figures relative to the state of arts of non-financial corporate debt of emerging markets.

Of course, monetary authorities should be ready to take action if necessary, while policymakers should intensify efforts to reduce macroeconomic and financial vulnerabilities and rebuild resilience (IMF, G20 Surveillance Note, February 2016). Fact is that it is still highly possible that, as long as China's rebalancing does not become a hard landing, a disruptive portfolio rebalancing of capital flows and non-financial corporate deleveraging in emerging markets can be avoided.

Otaviano Canuto and Aleksandr V. Gevorkyan are, respectively, Executive Director at the IMF and Assistant Professor of Economics at St. John's University. Views expressed here are their own and do not necessarily reflect those of the institutions to which they are associated. The authors are the co-editors of Financial Deepening and Post-Crisis Development in Emerging Markets to be published by Palgrave MacMillan in 2016.