Q: Is there really any way to resurrect the public square as a place of vigorous social and political debate?

A: No, not at all. We'll never again see the likes of Socrates' agora, or even 19th century political soapbox debate. The situation is in fact miserably hopeless, as far as I'm concerned. It's even worse when you consider not just the ubiquity and excessive use of our self-isolating mobile phones, but just how unwalkable some of our cities are (I'm talking to you, Jacksonville, Florida).

Still, listen. The fight to engage people, to rouse them out of their modern-world, individualized stupors to consider topics larger than themselves, is a worthy one. In a democracy such as ours, it's a battle that must be fought. Because our lives are bigger than the Twitter followers we've never met or the phones we so often use to escape reality.

I'll give an example from my own life about how it's nearly impossible to engage people in public over the issues of the day. I remember being a reporter in Seattle not too long after the protests against the World Trade Organization in 1999. You may not recall Seattle's WTO protests very well some 14 years later, but they grabbed global headlines for days and changed that city's local political dynamic so convincingly that the mayor lost his reelection bid. In Seattle, they were a big deal, and they had global ramifications.

Mere months after these protests, I was riding a bus down some of the very streets where those protests had taken place, and I was not surprised to see a handful of anti-globalist protesters on a corner holding signs. A group of well-coiffed women sitting across from me wondered aloud what they were doing and why there were doing it. I gave them a funny look, and then tried to talk to them about the WTO, but I soon realized they had no idea what the WTO or anti-globalism even was.

It was as if 50,000 environmental, labor, and social justice activists had never visited the city, as if local police hadn't sprayed gallons of tear gas and made hundreds of arrests, as if the downtown area hadn't been effectively shut down for several days.

Forget debating the issues: Here were three regular people going shopping who didn't even know a major event had even happened in their mid-sized city.

Good Lord, I thought. Is there any way, however small, in which regular people can engage in public over something other than sports or the latest sale at Old Navy?

This brings me to Steve Lambert's "Capitalism Works for Me!" a project so good I'm already sad to know that it will be retired only a couple years after its inception.

"Capitalism Works for Me!" uses a giant, attention-grabbing LED lighted sign that brightly states, as the project's title suggests, "Capitalism works for me!" On the left side of the sign blares the word "True" and on the right side of the sign blares the word "False." Next to each of the "True/False" words is an electronic scoreboard. A small podium that doubles as a voting box stands nearby, ready to count people's votes with multi-colored enthusiasm. 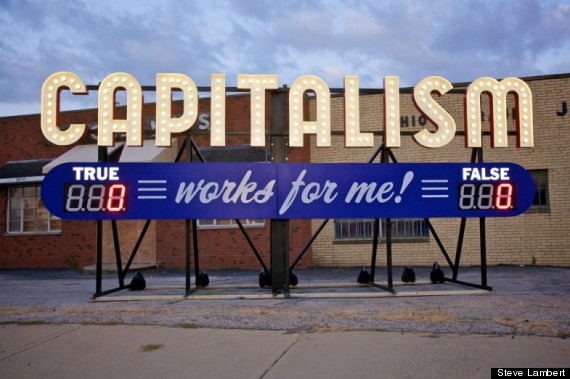 The sign's exclamation-pointed grandness could be taken for boosterism or biting sarcasm. Either way, voting is up to you: Does capitalism really work for you?

A great deal has already been written about this project. When he first announced it on Kickstarter in 2011, Lambert raised almost twice what he had hoped to raise. He has taken "Capitalism Works for Me!" around to several places in America, the Cleveland and Boston areas especially, surprising people in public spaces and inviting them to stop and seriously consider one of the most important aspects of our lives.

I thought I'd catch up with Lambert to see what kind of reaction his art project has been getting.

The "art" of "Capitalism Works for Me!" isn't necessarily in the LED sign and voting machine, it's in how people are confronted with a question that is both very public and very personal. Watch the videos of Lambert asking people why they voted true or false to his binary, unsubtle question: They are fascinating. The full range of American public opinion is on display. Some of the interviewees launch into hesitant monologues about their personal lives, where they were, where they are, and where they think they will be -- or won't (or can't) ever be. Others are much more pithy and trenchant.

Interviews from Capitalism Works For Me! True/False in Boston from Steve Lambert on Vimeo.

But what's so striking is how seriously people take the voting. Lambert traps them with a binary question: Does capitalism work for you, or doesn't it? And that has led to some interesting pauses. "People are forced to vote and that slows them down," Lambert says. "You get people to say, True, it does work for me right now, but it didn't before. Or false, it works for me but I don't like how it doesn't work for others."

Most people would probably rather there be a "sometimes" button to quickly push instead. Because capitalism isn't always such a great thing all the time for everyone.

Lambert told me that he didn't know how his sign was going to be received at first. He initially thought he might find himself confronting a hostile audience, or at least a few hostile audience members. "I guess when I built it I thought there was going to be someone walk up and punch me in the face," Lambert says, half-joking. "And that hasn't happened. People actually get totally drawn in by the lights and the question of it, I guess I've been surprised by the way people engage with it. They get actually thoughtful about it."

What you don't see in his videos are people debating each other. Remember, these are the gutted public squares of 21st-century America. Lambert has been learning about what people are thinking by putting a camera in their face and interviewing them. The one example Lambert could cite of a debate between two people involved a couple who thought they were alone (Lambert overheard because he was behind his machine adjusting the electrical equipment).

Given his own left-leaning attitudes, made clear by his other past art projects, I got the definite impression that Lambert would prefer to see people vote false, an impression underscored when he hedged on quoting the final recorded votes in the cities he has visited. He would only say that, of thousands of votes cast at every location, "the difference between 'true' and 'false' has always been just a few hundred votes." Nonetheless, Lambert does an admirable job of interviewing people objectively, asking friendly questions and not arguing with those who voted "True."

But Lambert, has reasons for his own biases, biases perhaps made stronger by his "Capitalism Works for Me!" tour. "I grew up in a family of entrepreneurs who were responsible doing the right thing and I saw no matter how hard you work does not correlate to how well you do. My parents worked super hard and really struggled. In my own life, I'm never quite getting ahead. And it's not just me. I've heard a lot of stories about people who go to school, get a good education, and then not find work, or become 'too qualified.' Some people have just terrible, terrible stories of alienation and exploitation. I mean some of them are really heart-breaking."

I've been hungry to hear more about the project ever since I first read about it a year ago. I was hoping to see it come to a neighborhood near me. But as it turns out Lambert plans on taking it to a few more locations before moving on to other art projects. By the fall of this year it will be at the Tang Museum at Skidmore College, Saratoga NY.

Frankly I can't think of a worse place for "Capitalism Works for Me!" to go then the museum of a small Northeast liberal arts college, where questions about the viability of capitalism linger in the air like the smell of old shoes in an old car. Out in the public spaces of middle America, though, they are almost never asked.

There's some hope. A Dutch artist saw what Lambert was doing with "Capitalism Works for Me!" and has built a very similar voting machine for Europe. Perhaps some enterprising young Americans, feeling the sting of Millennial unemployment and the need to see America, might take a replica of "Capitalism Works for Me!" out to some of this country's more neglected places. It would certainly be more worthwhile than driving the Oscar Meyer Weinermobile around for the summer, and we've already seen how far WTO-style protests will take us in this country, ask any Occupy Wall Street activist.

Lambert is genuinely open to the idea, in part because there are other projects he'd like to work on. In fact he uses a Creative Commons license for the project to encourage others to mimic what he's been doing.

But he warns that "Capitalism Works for Me!" has been a very time-consuming, expensive project. "I am working on getting it to other city centers, and I'm happy to talk to anybody who wants me to bring it to theirs," Lambert says. "But the sign is not profitable. It has not been a profitable project."

Of course. But, hey, that's capitalism for you. Our economy only runs on some kinds of independent thinking -- more often, it runs when people just buy things and don't think at all.