A man was taken into custody after landing a small aircraft on the Capitol Hill lawn Wednesday afternoon.

The Capitol Visitor's Center was temporarily locked down because of the incident, according to the AP. 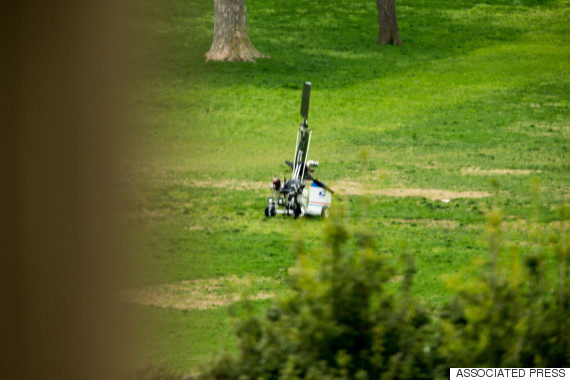 A photo of the aircraft that landed on the Capitol Hill lawn Wednesday.

The Tampa Bay Times reports the pilot of the aircraft, identified as a gyrocopter, is Doug Hughes, a mailman from Ruskin, Florida. Hughes sent letters to every member of Congress "demanding reform and declaring a voter's rebellion," and told the Times his gyrocopter ride was in support of that belief.

"I'm not promoting myself," Hughes told the Times a few weeks ago. "I'm trying to direct millions of people to information, to a menu of organizations that are working together to fix Congress."

Hughes also reportedly understood the risks of flying into such a protected space:

Of course, Doug Hughes might be shot out of the sky. He knows this. He has thought about it day and night for more than two years, wrestling with the tiniest details of his insane plan.

His biggest fear all along, he said, was losing his nerve.

"I have thought about walking away from this whole thing because it's crazy," he said. "But I have also thought about being 80 years old and watching the collapse of this country and thinking that I had an idea once that might have arrested the fall and I didn't do it.

"And I will tell you completely honestly: I'd rather die in the flight than live to be 80 years old and see this country fall."

According to Bloomberg, President Barack Obama was briefed on the incident Wednesday afternoon.

Read more on Hughes at the Tampa Bay Times.