In the pantheon of nostalgic food products, Capri Sun ranks pretty high up there with Dunkaroos and Lunchables. It's been a lunchtime staple for millions of kids since it was introduced in 1981, so it would be understandable for anyone under the age of, say, 45, to have unreservedly positive associations with the juice and its trademark metallic pouches.

But it turns out there's a downside to Capri Sun's packaging, which is made of multiple layers of plastic and aluminum that are very difficult to recycle. For that reason, a coalition of environmental groups has started a campaign called "Make It, Take It" to try to get Kraft, which manufactures Capri Sun in North America, to come up with a more environmentally friendly package for the drink. 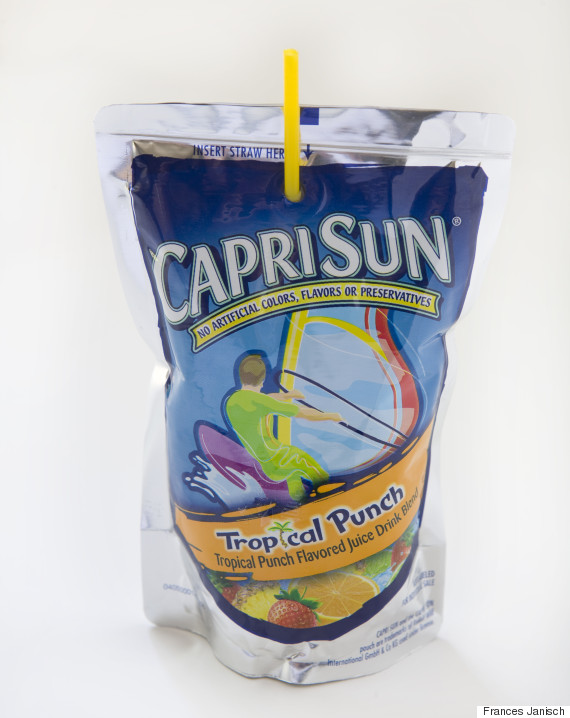 The environmental groups behind the campaign say that 1.4 billion Capri Sun packages end up in landfills every year, enough to wrap around the earth five times. According to Plastics News, Kraft encourages consumers to send used Capri Sun packages to a New Jersey company that specializes in recycling them. But Make It, Take It says that just 2 percent of Capri Sun packages actually get sent to this company.

Reached by The Huffington Post, Kraft issued a statement that affirmed the company's interest in making its packaging more sustainable, noting that in 2012 they had redesigned the cardboard boxes in which Capri Sun pouches are sold to make them less wasteful. But the company did not commit to any specific modifications to the pouches themselves.

"At Kraft, we take a comprehensive approach to packaging -– one that aims to cut waste, conserve natural resources, promote food safety, meet the extensive packaging regulations and is satisfying to our consumers," the statement read. "We consider the appearance, functionality, cost and environmental impact of all our packaging designs."

This isn't the first time Kraft has come under fire for the pouches. The coalition behind Make It, Take It pushed for reform a year ago, and one of the groups involved, Oakland-based As You Sow, got Kraft shareholders to vote on a resolution to make the packaging easier to recycle earlier this month. It failed, with just 29 percent of the vote.

Kraft has been amenable to changing the juice within the packages, though. The company bowed to consume pressure for healthier kids' foods by announcing, in February, that it would remove high-fructose corn syrup from the recipe, reducing the number of calories in each pouch from 60 to 50.