Some heroes are born. Others are just creeps in costume.

A Florida man faces a felony charge after police said he texted photos of his penis to a 16-year-old girl. James Weldon Alton, 29, met the teen while working as a superhero impersonator at Universal Studios in Orlando.

The Smoking Gun obtained a photo of Alton in costume as Captain America:

According to the Smoking Gun, Alton met the girl after she took a photo with him while he was at work dressed as Captain America. The girl posted the photo to Facebook, and Alton found it and commented on it, beginning an online friendship.

On April 18, the girl told the man that she was 16. A week later, “Alton sent photos of his penis” to the girl’s cell phone.

The girl's father went to police when he learned his daughter had planned to meet Alton, and discovered the photos.

Alton had not seen the girl since she met him, police said. In a sworn statement, he said that the girl told him she was underaged, but that he chose to ignore that, "because at times he thought it was a joke or that it was all just merely online [flirting]."

He also admitted that the photos were a bad idea, and insisted that he didn't know what he expected to receive in exchange for them. Alton said he planned to meet the teen, but no firm date was set.

Alton was arrested on one count of transmitting harmful material to a minor. 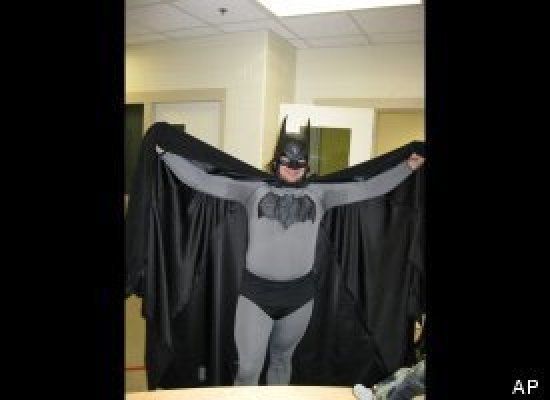 1 / 1
Mark Wayne Williams
Holy handcuffs! Police in a smog-clotted town in northwest Michigan are touting the arrest of Batman. The legendary caped crusader was reportedly nabbed while dangling from a 30-foot-high building. The unmasked superhero wannabe is actually a local resident named Mark Wayne Williams.
AP