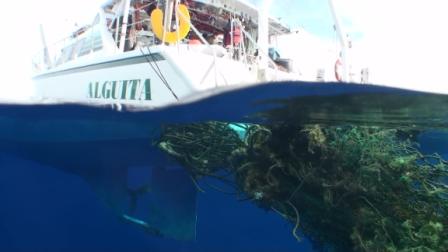 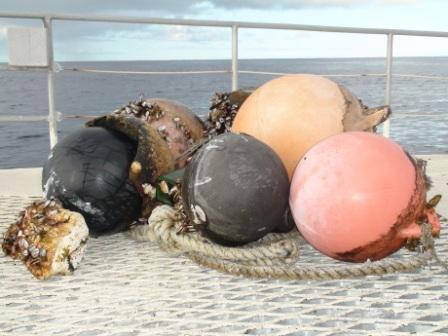 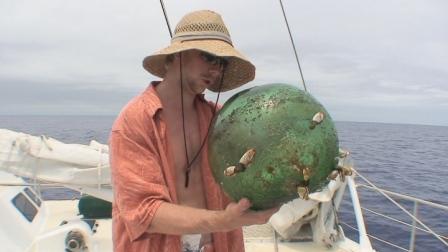 In Captain Moore's email from July 6th, the Alguita is well on its way to the International Dateline, the crew has an unique Independence Day and Nicole performs a 20 minute stopwatch survey, the results of which will shock you.

Our voyage to the International Dateline to assess plastic debris levels is now in full swing. After four days of chasing non-existent tradewinds, we have finally found them up at 33 north lat, 165 west lon, and are sailing happily under our beautiful red and green spinnaker.

The motoring was punctuated by two instances of prop fouling by ghostnets (lost or abandoned fishing gear) which had to be cut and unwound from the propellers -- a difficult job, especially at night. The calm weather, while forcing us to use half our fuel supply, also afforded excellent sampling conditions for plastic trash. To a person, the crew was shocked by the amount floating by (which they often netted) and the amount pulled up by our manta trawl. 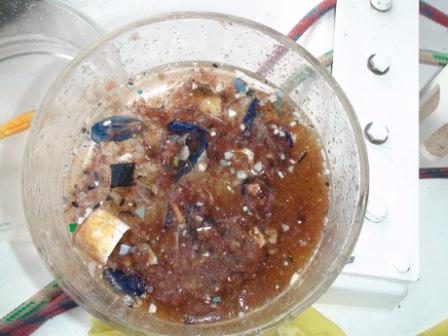 On Independence Day alone, we recorded 34 large objects netted, including a dozen fishing floats, a hairbrush, a Japanese survey stake (definitely not from a ship), and a PET bottle of Mitsoya Cider. That does not include the many smaller bits we scooped up and didn't record in our "collected debris log."

I can imagine young people on voyages in the not so distant past, when the ocean was teeming with life, excitedly netting up fish and other sea creatures in abundance. I see the same excitement in my young volunteer crew shouting and netting up debris in an ocean teeming with trash.

Of course, our longest handled net can only reach out about 10 feet from the boat, so we see many, many more pieces floating by than we can collect. In fact, Nicole did a stopwatch survey from the starboard bow and counted 217 pieces of plastic in 20 minutes or a little more than 10 pieces per minute.

We are well and truly in the Subtropical Convergence Zone, as described by the NOAA Marine Debris Program, a band several hundred kilometers in width centered around 30 degrees north latitude, and stretching from far offshore California to far offshore Japan.

One of our goals is to see how levels of plastic pollution fluctuate within this area. We have another species to add to our list of fish that have ingested plastic particles. I netted up a fishing float with a long tail of rope heavy with barnacles and a 9" Chub (nenue in Hawaiian) came up with the float. Chubs, genus Kyphosidae, have extremely long digestive tracts and "use bacterial fermentation to extract maximum nutrition from their diet of seaweed." (Guide to Hawaiian Reef Fishes, by Hoover)

Christiana was surprised to find on dissection, pelagic crabs in the stomach. Apparently, when you have to live off the ecosystem created by plastic debris, your vegetarian preferences may have to be compromised. In addition, she found two small plastic fragments along with the real food.

Drew spotted the first glass fishing float of the trip and we were able to grab it for his collection. He got a similar large green glass float on the 2002 gyre voyage.
Aloha from the place where civilization's unconscionable waste converges.