On June 10, 2009 Captain Charles Moore set off on Algalita"s Oceanographic Research Vessel for the first leg of a four month expedition from California to past the Northern Hawaiian Islands to test for plastic marine debris.

In his email of July 2nd, Captain Moore's manta trawl has been fixed and as they continue their journey to the accumulation zone, the Alguita is being followed by a trail of plankton and plastic.

We are now two days out of Honolulu after getting our manta trawl re-welded and our spinnakler re-sewn. We are in the same situation we were in when we left Long Beach, in that we are using the engines to chase down the wind so we can sail. We need strong winds in excess of 15 knots in order to move our heavy vessel along at a good clip. 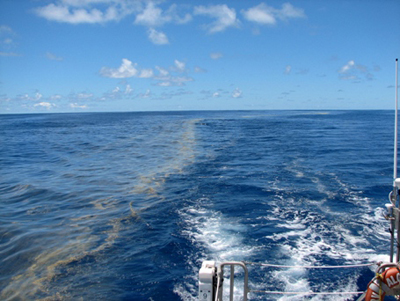 Today, although we were only 200 miles from Kauai, we were beset by the doldrums. Winds have been virtually nonexistent and the sea state has been a 1 on the Beaufort scale, meaning just tiny ripples on the surface.

In the late morning we realized we were transiting miles long lines of plankton that had left yellow streaks a few meters wide on the surface. I had seen this phenomena before when returning from a voyage to French Frigate Shoals in the Northwest Hawaiian chain.

The lines were also visible from the air at that time according to Jim Ingraham, who was flying over us after a rendezvous at Tern Island, where we studied their 10 year debris collection with Dr. Ebbesmeyer. 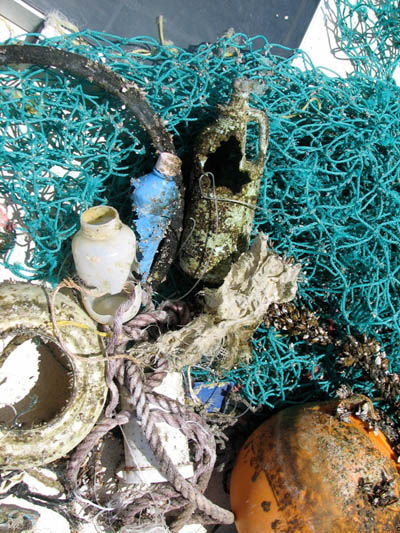 These thick blooms are also good places to look for plastic debris, and we were soon dipping up mass quantities of bottles, straps, sacks, ropes, parts of tubs and buckets, net fragments and hard plastic fragments. 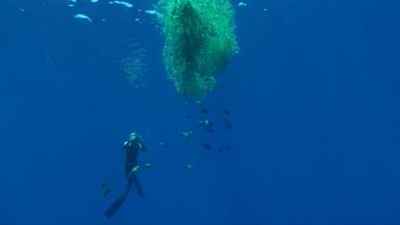 Eventually we decided to dive in and look at this phenomena from below. We chose a particularly intense concentration area for our dive, and as we approached we found a green ghost net about 4 meters long in our path. We stopped right there and saw many species of fish around the net. This made for good diving. 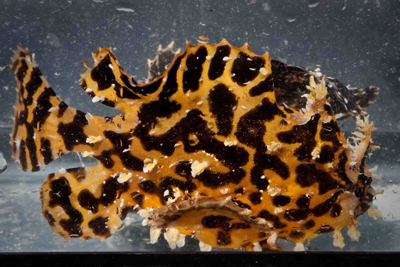 Christiana, our ichthyologist managed to net two beautiful and exotic frog fish, normally coastal species, hanging around. At 24 degrees North Latitude, we are still well outside the accumulation zone around 30 degrees north. Nevertheless, we netted a deck full of debris during the morning while passing through mile after mile of yellow streaks of expired plankton.

We have not seen a ship for days. There are continent sized parcels of ocean out here that have their own identities that have never been described. We are getting to know our ocean planet in a direct way not available to landsmen or commercial mariners in a hurry to make port. 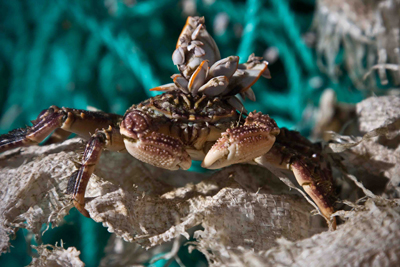 The Family Dinner: Great Ways to Connect with Your Kids, One Meal at a Time
by Laurie David, Kirstin Uhrenholdt

The Family Cooks: 100+ Recipes to Get Your Family Craving Food That's Simple, Tasty, and Incredibly Good for You
by Laurie David, Kirstin Uhrenholdt