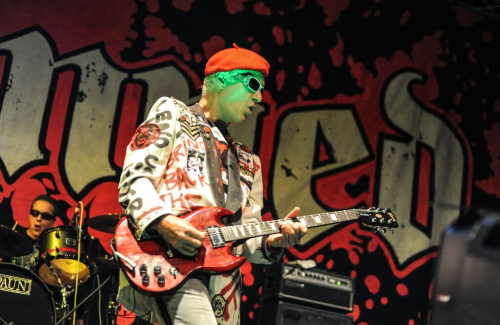 Busting out of the late 1970s punk rock scene in London, England, The Damned was on the forefront of a cultural movement that still feels its reverberations over 40 years later. Without any high hopes of where any of this music would take them, The Damned were the antithesis of everything that pop society and the music industry was jamming down people's throats at the time. The Damned, among other bands from that budding scene, were a necessarily alternative to the mainstream, and that war still lives on decades later.

The Damned are about to kick off a small tour of the United States and I was able to connect with one of the founding members of the band via email, guitarist Captain Sensible, and ask about The Damned's storied past and why the they are still reverent.

It's been 40 years since The Damned did their first show. What really sticks out to you when you look back at them early years as a band?

We had to deny we were actually a punk group to get bookings. Of course the venue would find out the truth as soon as we started playing which sometimes led to amusing incidents - like the headline act, some prog rock band, pulling the curtain on us during a song. It must have been funny for the audience seeing our heads appearing from under the curtain as we struck up the next tune. Audiences in towns that hadn't bought into the punk thing would dwindle to a couple of people by the end of the show. People who were into the country rock that was popular at the time were never going to dig The Damned. And we didn't care for them either. We cranked the amps up and the riffs flew with a "machine gun etiquette". In fact, that very phrase was used in a live review and borrowed for an album title later on. The gigs were sweaty adrenaline fueled affairs, a total celebration of blistering guitar thuggery. So much so that Jimmy Page would occasionally be seen in the audience with a smile on his face. He got it.

When you look back to that time that lead up to the formation of the band, why do you think you guys got together to do this sort of music that was, whether you guys realized it or not, was changing the landscape up the culture?

In '76 I was just happy to twang a guitar onstage and get a case of free beer in the dressing room. I've been a lucky bastard, and don't take it for granted like some other musos I could mention. The glory days you were actually quite rough n ready, as we were often sleeping on each other's floors. It was fun but hardly glamorous. And we were the first, which always got up the [Sex] Pistols noses. Nice eh!

We've had a splendid crack as a band. A lot of things that went pear shaped were our own stupid faults. How we survived the mania of the 70s / 80s without anyone dropping dead I've no idea. And wrecking label offices was never going to get us extended contracts or decent promo budgets. But as you can imagine it was bloody good fun in a time when bands could pretty much do what ever they wanted in the studio without label types breathing down your necks. In fact, when they did turn up we always put on a little show for them - band splitting up in flurry of fisticuffs, drummer climbing in grand piano to add nonsensical avant-garde overdubs on a straightforward punk tune, food fights. They got the idea in the end and left us alone, and we actually made a few decent records despite all that chaos.

Punk put the UK at the forefront of the music scene for a couple of years - not everyone liked it of course but The Damned, Subs, Mopeds etc were a much necessary alternative to Saturday Night Fever and disco fever in general with the gigs at the time full of pogoing spiky haired types having a bloody good time.

In another country the class of '77 would be national heroes but I'm the UK, and specifically by the lack of radio play we receive I get the impression punk is a dirty little secret that would be better brushed under the carpet - unless you are an American pretendy punk act with a big label and which case that's all well and good. Put them on the playlist forthwith!

Why do you think a band like The Damned was able to exist for now 40 years and still have a history that is so reverent?

We straddle several genres - punk, goth, psych. It's a good mix. Without getting uppity, The Damned can play. It's a proper band like Deep Purple and the Sabs before us. I just wanted to be in a group as good as that, with added attitude

The Damned came up during a kick ass punk scene with the likes of The Sex Pistols and The Clash, among others. What was it about that group of bands that made it such a special thing?

What I like about the UK 'class of '77' is that the bands all sounded different having their own take on punk. Many members of London '77 bands had been at The Ramones Dingwalls gig a year or so earlier and shortly after kick starting their own scene. The Ramones sound was a spectacular blitzkrieg of noise, garage and pop music. And Joey was a lovely bloke too. We played what would have been his 50th birthday party in New York because his Mum Charlotte, who organized it, knew we were chums. It was a great but emotional evening.

But back to 1977 - The Stranglers sounded nothing like The Buzzcocks who were in turn quite different to The Clash. We all agreed on one thing though and that was that the old dinosaur acts like ELP and Yes were past their sell by date and they could take their 20 minute drums solos and songs about wizards and pixies and fuck right off. Punkettes like Crissie Hynde, X Ray Spex and the wonderful Slits struck an important blow for women in rock after years of record labels treating female artists like pieces of meat to exploit as they saw fit. A lot of that sexist exploitation went out of the window for a while, until all that ghastly pimps and hos stuff turned the clock back to the bad old days for the ladies again.

Do you remember any moment in those early years when there was just a sign or some sort of event that happened that made the band feel like this could be an important thing in the long run?

I've never ceased to be amazed at the bands longevity - many a time I'd thought it was over but even through the disco DJ days, the UK had trips abroad, in particular the USA kept us going. Thankfully your country has an ongoing love affair with the guitar!

Actually, when we split the 1st time (1978) Lemmy saved us. Here's how. It's never fun when a band splits up, especially if you are a former toilet cleaner, and that occupation now seems like the only paying job option you have left. This is the terrible situation I found myself in shortly after we'd delivered The Damned's 2nd album to Stiff Records early in 1978. Titled Music For Pleasure, the recording sessions had given me very little joy as we were barely talking to each other by that point. Our leader Brian James had written an amazing bunch of anarchic tunes for Damned Damned Damned but compared to that, his new material was decidedly inferior. And that, added to the fact that he wasn't keen on playing anyone else's songs was pretty much the cause of all the conflict.

I have to admit my behavior was fairly out of control at the time too. We were living in this mad 24 hour punk rock party with drunkenness and lots of stuff getting smashed because I had discovered I was actually quite good at causing a bit of chaos. Never once did it occur to me that we were the idiots who were paying for all the destruction as I might have been a bit more careful with other people's property had I have known! We DID all agree on one thing though - that rather than rehash the 1st album time after time, The Damned should go on a sort of musical adventure, changing and developing with each new record. That was the reasoning for Pink Floyd's psychedelic ex front-man Syd Barrett having been appointed producer for Music For Pleasure and I still think we could've made an interesting spaced out punk psych record together - if Syd had been well enough mentally to attend the sessions. He sent Floyd's drummer instead and he couldn't even mix a gin and tonic!

It just wasn't happening for The Damned so, after being dumped by Stiff owing to lousy album sales, having limped on for a few more months of dis-harmony, Brian called a band meeting (in a pub of course) and told us he had had enough of our company and it was goodbye. Not the news I wanted to hear, as I rather liked jumping onstage making a loud noise - and all the free beer in the dressing room was rather nice too!

What kind of new band would I put together was the question I was asking myself and the answer was right there in front of me. Why not attempt the psych / punk experiment that should have been Music For Pleasure, and that is exactly what I did with the short lived 'King' group who although we were yet to do a paid gig were starting to sound pretty good. When the phone rang and it was my ex colleague Rat Scabies who'd been offered some money for a London show if we could get some kind of Damned lineup back together. Being totally broke I didn't need much persuading I can tell you.

As the ex lead guitarist of the Johnny Moped band, I fancied a go at 6 strings again, so we called up our old mate Lemmy to play bass and knocked together a set list of Damned and Motörhead favorites during a short boozy rehearsal. The reaction of the audience on the night of the performance was so amazing so we arranged another show, and then another, and well, you know the rest. 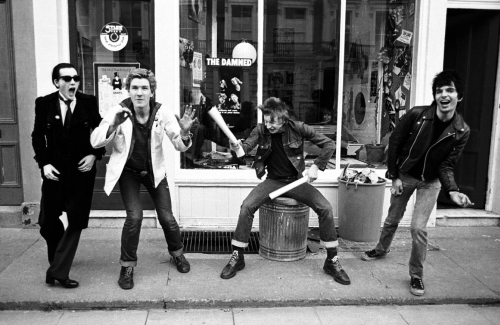 What do you hope the legacy of The Damned is?
We are evangelists for proper live music, no choreography, rehearsed between song banter, use of tapes, auto tune - any of that nonsense. It's all whatever happens on the night, a bit of jamming, the occasional mistake, some chat with the audience, and some decent music. Better than watching TV that's for sure.

What does the future have in store for The Damned?
We like to think of ourselves as being onboard a rudderless pirate ship ailing thru a sea of musical mediocrity - back to save the world from plastic entertainment garbage like the X-Factor and that horrible pop music with auto tuned vocals. We all do other things most of the time so when we get back together, and with the varied catalog of songs to choose from, it's always fresh and exciting. The only problem is difference of opinion regarding the set list - so we've been known to hand out sheets of A4 to the queue outside the venue at times. Let the fans choose the songs. While we are all still able to do it and its still fun, it's very much 'Carry On The Damned'. In fact, when we're gone they should make a film with that title.