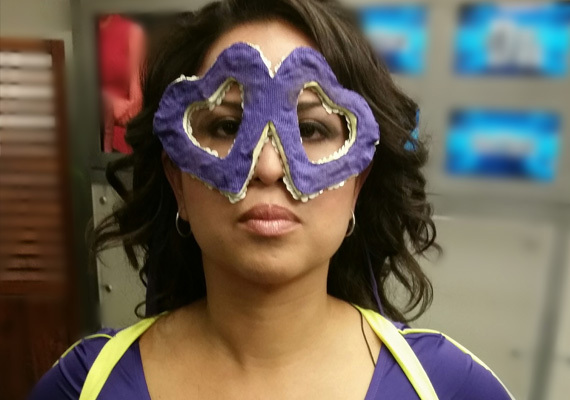 Picture this: You wake up in the morning and get a couple emails from Apple fans threatening to torture you because you wrote an article saying that the Dell XPS 13 is so good that it could make you forget about Apple's notebooks. Then, a couple weeks later, you actually compliment and defend an Apple product, but say it's flawed. Still, the Apple lynch mob wants your head chopped off. As a writer, these are things you deal with.

Then, you go to Facebook and see Bernie fans and Hillary supporters going at it. You turn on the news and there is nothing positive. After all, positivity just doesn't sell these days. You get in the car and people give you the middle finger on the road. It can all make life seem so hopeless and did for me. Then, I ran into a woman wearing a striking purple outfit with yellow trimmings. She asked me if I needed a hug, and I did. Her hug was so warm and sincere that as skeptical as I am, I didn't think she was going to ask me for money.

I secretly followed her around Downtown Los Angeles and saw her embracing people the same way she did to me. I did a Google search and found out she was on a show called The Doctors. I ask her for an interview and she more than happily obliged.

Johanna Cryst Mantilla, 35, is the woman behind Super Hugs. She was born in Venezuela from Colombian parents and came to the United States 26 years ago when she was only 9 years old. She lived in Miami most of her life until deciding to live her dreams of traveling around the world and eventually settling in Studio City, CA.
--------------------

What gave you the idea for Captain Super Hugs?

I was backpacking in Bangkok, Thailand during a national Holiday called Loy Krathong when I met a guy named Sunny. I guess he noticed my personality and asked me to help him give free hugs, in which i replied, "To strangers? SURE!"

So we started giving free hugs to everyone around us. Ever since Bangkok, I just started hugging more and loving it. Seeing the reaction on people's faces gave me so much joy, which is why I kept doing it. Captain Super Hugs was born two years later in February of 2015 when my running group decided to have a superhero themed run and that's when I came up with my alter ego "Captain FREE HUGS," which I later changed to Captain Super Hugs.

Why do you think it's so important for people to receive hugs?

Hugs release the "happy hormone" or drug called Oxytocin, which lowers your blood pressure. Hugs are especially helpful if you're feeling anxious. A hug can lower your cortisol (the stress hormone), enabling a higher quality of sleep. It can increase your social connections and a sense of belonging.

Who was your favorite superhero growing up?

I never had a favorite until I was an adult. It became Captain America because he believed in himself. He ran into the opportunity to become part of an experiment that made him physically strong, but his heart is what makes him an amazing superhero.

Where and when does Captain Super Hugs make appearances?

The Captain only comes out on special occasions and events such as the LA Marathon, CicLAvia, and an occasional day on the Santa Monica boardwalk. However, the Hugmobile makes an appearance every day since it's my only way of transportation. I am always wearing my "ALL YOU NEED IS HUGS" shirts when I'm driving. Every day, people ask me if I can give them a hug and I also get a lot of air hugs and beeps on the highway.

Describe your most memorable moment as Captain Super Hugs

There are so many moments, but a special one happened when I was on a road trip from Los Angeles to Boulder, CO. On my way, I stopped at Arches National Park in UT for a hike and decided to dress as Captain Super Hugs. I heard a very excited little girl asking me for a hug. Her mom was as excited as the little girl and so grateful for what I was doing. I gave about 50 hugs on the trail back to my car.

Have you experienced anything really bad in your adventures as Captain Super Hugs?

I haven't had really bad experiences. However, I've had a couple of gentlemen try to grope me. I've learned to get better at reading people, so I try to avoid those situations.

How has your family reacted to your new role?

They love it and are very supportive. My mom was actually the one that made my costume. She is a seamstress. My younger sister designed the logo and is my art director.
--------------------

Mantilla is currently working on a Captain Super Hugs comic series, where she will reveal four more superheroes. You can view her website here.