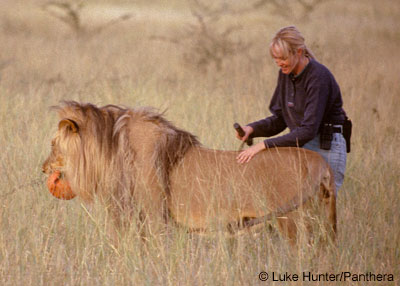 Business is good for the "lion encounter" industry. There are now dozens of these operations across Africa that sell close encounters with captive lions. Starting at $60 for "a precious twenty minutes" of cub cuddling, and climbing to more than $3,500 for a month of paid "volunteering," anyone can pay to play with young lions and pose for photos to show the folks back home.

But while cuddling cubs is hard to resist, does it buy any actual conservation? Visitors are promised that, by handing over their cash to cozy up to tame lions, they are helping to save the species in the wild. However, in a recent report written by myself and leading lion scientists working across Africa, we explain that none of these lions are ever set free. They are too tame. If they were to wander into a village or farm looking for a belly rub or a feed, the surprised locals would reach for their rifles or spears.

Even assuming there is someplace sufficiently wild and people-free, captive-raised lions are not very well-suited for survival. Surviving as a wild lion is infinitely more complex than the instinctive know-how of pulling down a wildebeest. As they mature under the tutelage of older pride members, lion cubs learn a complex array of behaviors -- not only the refinements of killing, but also species-specific tactics for finding and hunting different prey, coordinating with other pride members, avoiding humans, protecting cubs from potential predators and so on. None of these can be adequately taught by human surrogates, nor can they be learned in the ecologically simplified setting of an enclosure, even the very large "semi-wild" pens boasted by some operators. If enough captive lions are released into the wild, I am sure a few will make it, but many will not.

More importantly, despite the extravagant claims of the encounter industry, there simply is no need to even consider captives for reintroduction projects. As outlined in the paper, there are now more than 450 reintroduced lions and their offspring in more than 40 newly established reserves across southern Africa -- the crucial difference being that all of them are wild-born and bred. For over 20 years, biologists and wildlife managers have successfully translocated wild lions from marginal areas into landscapes where people had wiped them out. The process works because wild lions captured in one place are already well-equipped to survive as wild lions in another place. Any sincere effort to restore lion numbers would draw on wild populations, rather than waste years and millions of dollars breeding lions in cages, a process that to date has not resulted in a single release. But, of course, using wild lions to re-establish the species rules out charging gullible visitors for an up-close experience; so, cue the tame cubs for petting.

The bottom line is, the lion encounter industry does nothing to conserve wild lions. The same tourists who spend hundreds of dollars walking with tame lions behind fences (and $90 for the DVD!) could instead visit Africa's outstanding national parks and game reserves where the entry price and lodge fees help cover the costs of protecting those areas. For my money, I'd stick with the real thing: no matter what the glossy brochures and gushy advertising claim, it won't ever involve tame lions.

Download the paper 'Walking with lions: Why there is no role for captive-origin lions (Panthera leo) in species restoration'

Read a Q&A with Panthera's President, Dr. Luke Hunter, on 'Walking with Lions'

Dr. Luke Hunter is the President of Panthera, the world's leading organization devoted exclusively to the conservation of wild cats and their ecosystems. Hunter has conducted fieldwork on large cats in Africa since 1992. His current projects include assessing the effects of sport hunting and illegal persecution on leopards outside protected areas, developing a conservation strategy for lions across their African range, and the first intensive study of Persian leopards and the last surviving Asiatic cheetahs in Iran.