"Once, there was a man who filmed his vacation.
He went flying down the river in his boat
With his video camera to his eye, making a moving picture of the moving river
Upon which his sleek boat moved swiftly toward the end of his vacation
He showed his vacation to his camera, which pictured it, preserving it forever:
The river, the trees, the sky, the light, the bow of his rushing boat
Behind which he stood with his camera
Preserving his vacation even as he was having it
So that after he had it he would still have it
It would be there. With a flick of a switch, there it would be
But he would not be in it. He would never be in it."

This poem from Wendell Berry beautifully ponders a question that's been resonating within my own heart lately: Does our addiction to capturing the moment with external devices detract from the vacation experiences we wearily yearn to attain? 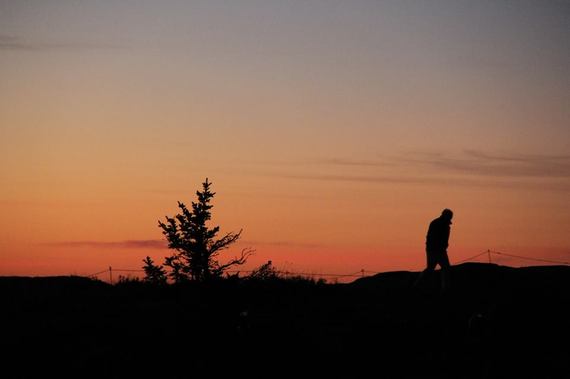 Unity College, my alma mater, is conveniently (dangerously?) located just over an hour from Acadia National Park. Last September, my friends and I sojourned to the Park for a day of outdoor adventuring.

Only my second visit, I reveled in the warm, sunny afternoon. It was a stark contrast to my prior experience -- a cold and windy day in early May. Then, we had the park to ourselves. This day, however, hundreds of cars clogged the parking lots. We shared the outstanding view from the pale rocks of Cadillac Mountain with their passengers -- observers who witnessed their surroundings with not their eyes, but their iPads and Smartphones. In fact, I was almost mowed over by a middle-schooler boy stumbling aimlessly around the summit, bleary eyes glued to his phone's screen.

This disconnect from the present really bothered me. I've been doing a lot of thinking about the appeal of social media, its addictive tendencies, and how its use can impede our full satisfaction of time off.

It was far from the first time that I've witnessed people so enthralled with their phones that they inadvertently remove themselves from their environment. Last summer, I worked behind the front desk of Hartwick Pines, one of Michigan's busiest state parks. Inside the visitor center were many display cases. A window overlooked a lively bird feeding station. There, I noticed a disconcerting trend: The first thing to enter the building were screens -- screens connected to park patrons of all ages who seemed disconnected from anything happening outside the screen. It seemed that generating physical proof of their experiences rather than actually living that experience in the moment, to its full potential, was prioritized.

It's distressing that so much of our time is spent squinting through screens, screens that promise to make life better, make life streamlined -- but indeed make it complex, cluttered, a blur, numbing, less meaningful. Social media has its time and place, but we need to be vigilant to relegate it to a low priority in our lives.

We need breaks from routine to combat the stress of our hectic lives. For as long as people have been bound to careers, vacations have been a revered way of escape. That escape can be from routine, from obligations, from familiarity. The best vacations will increase one's understanding of their world and bring a chance to help us reconnect with ourselves.

Vacations extend beyond simply the physical. We need to also be in a different mental place to fully reap the benefits of vacation. Our lifestyles promote information inundation. Our brains need a chance to declutter. However, it takes intentionality to prevent vacation from becoming simply another permutation of stress -- the stress that comes from painstakingly documenting every moment and memory on social media.

It's ironic. We often visit social media sites for a "break", but these sites represent a significant stressor to many people. Social media brings stress into our lives because it makes us feel that it's mandatory to both (a) keep up with our friends and (b) maintain an ideal image to our followers. If I'm not producing anything for the public eye, I am nothing. Right? Our fetters to social media have the capacity to compromise the very escape we crave in our vacation experience, if we allow them to. 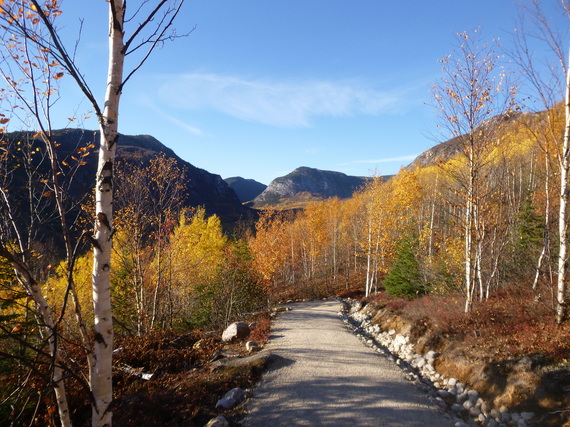 "I was simultaneously tweeting, Facebooking, and Instagramming both photos and hyperlapse videos. That vertical climb got many likes. But, I have to say -- I don't remember much of it." These are the words of Jo Piazza, a writer for Yahoo! Travel. Here she describes a weekend trip where she was focused more on the actual documentation of the event than enjoying her surroundings. She was in Arches National Park, yet her most vivid memories seem to be connected to her stress of generating physical evidence of her adventure.

What happened to her burning lungs and legs, or the dusty air, or the scream of soaring Red-tailed Hawks? The sensory details from her experience were forgotten in her frenzy to document her journey.

In contrast, to Piazza's hiking experience, David Roberts writes about the pinnacle from his year of disconnect from social media. At the time, Roberts was writing for Grist Magazine and the nature of his job mandates a high connectivity to social media.

He received a wake-up call the night he asked his son, "What does Daddy do for a living?" His seven-year-old responded, "All you do is sit on your computer and say, 'blah blah blah Congress, blah blah blah Mitt Romney!" This statement served as a wake-up call of sorts for Roberts, who used social media so much that he'd on occasion exceeded Twitter's post per day limit. Roberts vowed to give his brain a break and step away from social media for an entire year.

During this period, he and his friends spent a month in a ski lodge and Roberts reminisces, "It took a while for us to relax into just being, with nothing else to do. We snowboarded, played cards, cooked meals, and laughed at inside jokes. It doesn't sound like much, but it has more weight in my memory than any number of online dramas."

Disconnecting forces your mind to process an event differently than if you're simply going to tweet it. We are able to feel more joy from an adventure when we ponder it beyond calculating how it will appear in a Facebook status.

During 2013, I lived in Palawan, Philippines, with no access to social media. Seven months into that stint, I met my family in Kauai. It was the first time I'd seen my family during that time -- and also the first time that I'd had access to social media. It was extremely stressful to try and document everything in the name of sharing on social media. So stressful that when we hiked the Kalalau Trail for two days, I was relieved to be forced away from the pressure of social media and concentrate on what was most important -- quality time with my family and absorbing the place around me. 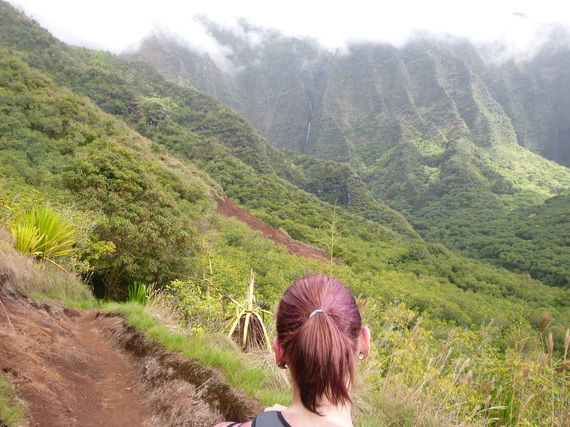 It should seem obvious that social media should be left at home with other responsibilities. So, why can't we step away from the infatuation? The simple answer is that we crave attention. Social media provides a means to document social life, build identity, create networks, share experiences. But, it goes beyond simple documentation.

At least subconsciously, we use social media as means of exhibitionism. With each mark of affirmation from other users -- shares, likes, comments on our content -- the part of us craving instant gratification and rewards is fed. When that constant feed is severed, we get bored. And, boredom breeds unhappiness.

The more things pulling at our attention, the less capacity we have to meaningfully engage in each activity. We become more disconnected, bored and unhappy, yet we keep logging on to social media and falling victim to its addictiveness.

How many of us do actually use social media during our vacations? According to Mashable, 80 percent of vacationers use their smartphones, with 70 percent of those people using their devices to post on social networks during those vacations. Reasons for this include "staying connected so they don't miss out" and even the less-benign "making friends jealous with travel updates" But, who is really missing the vacation? We are.

Although social media feels good to the part of us that constantly craves validation and approval from outside sources, unplugging is vital. Huffington Post says that the more time you spend disconnected from social media, the better your mood, relationships, and overall health. When someone is using a device to connect to social media, that user has an absent presence. This means that the user is shutting off the outside world, having a physical presence in one place yet a mental presence in one entirely different.

It's hard to experience what's all around you when you're spending every moment with your eyes glued to a screen. Capture life in your soul -- not in your smartphone! 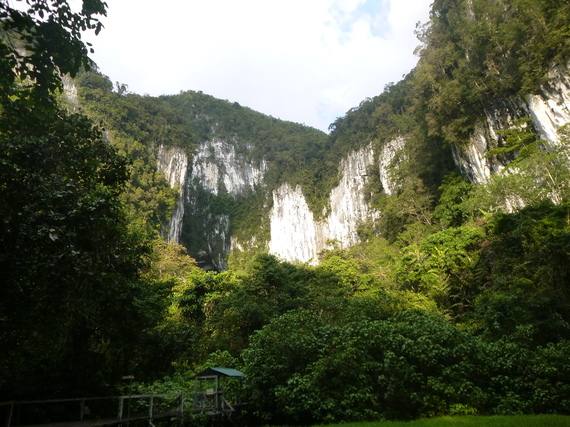 Don't vacations emphasize escape and relaxation? It's unnecessary, harmful even, to always prioritize productivity or measure ourselves to other peoples' standards and expectations. Although we live in a world that tells us the off switch has ceased to exist, it does. We just have to be intentional about turning -- and keeping -- it off to get the most out of our breaks. 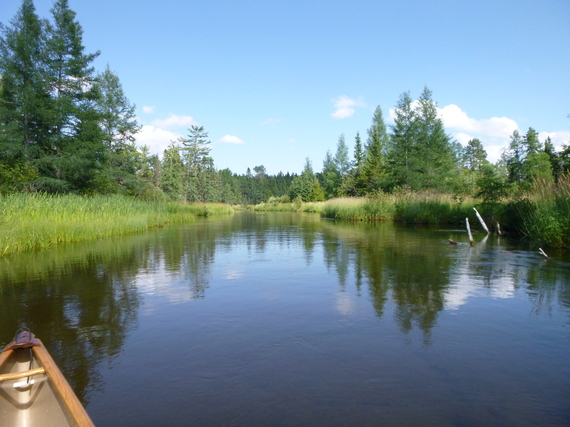 One weekend last July, I found myself in my solo canoe, paddling down a beautiful river in northern Michigan. Each stroke of the paddle took me farther away from 4G coverage, and as the bends unfolded behind, the purpose of the trip -- and my outlook on life -- became more clear.

Because of the circumstance, I was forced to reach out to the people around me when I needed help or information. And I remember vividly the details of the journey -- the smell of basswood blossoms through the fog-cloaked riverbanks, the raccoon family I startled as I cleared a bend, the feeling of being in a mayfly snowglobe during a tremendous dusk hatch.

That fall, when I returned to the stress and demands of school, those memories carried through. Vacation is essential to our psychological and physical well-being. To completely maximize this healing, we must first disconnect in order to reconnect.