The first time I saw a picture of a capybara, I felt like I'd just found out unicorns are real.

It seemed too good to be true: This improbable, shaggy-haired beast, which basically looked like a giant hamster, was hugging -- yes, hugging -- an elated brown-and-white-spotted tabby cat.

Weird Cat Facts: 8 Reasons Your Cat Likes To Lick You
Cat Survives 428 Miles Aboard A Spay-And-Neuter Caravan
Let's Talk: Does Your Cat Actually Like Car Travel?

"INTERSPECIES LOVE!" I captioned the picture, which I promptly shared on Facebook. "Does anyone know what the big hairy fella is?" I added.

I learned that the hairy fella was a capybara. These critters have a history of kindness to other animals, including Cheesecake, who adopted a litter of Dachshunds. You can see a video of that love-fest here.

The one I saw was not just any capybara: He was Garabaldi ROUS (rodent of unusual size), the beloved pet of Melanie Typaldos. (Follow him on Facebook here.) 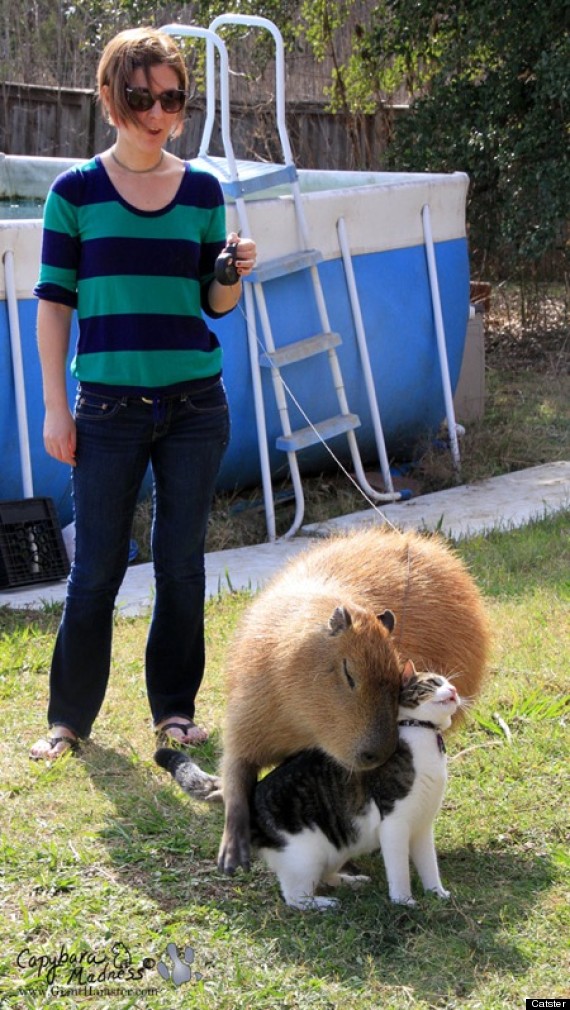 Hailing from South America and weighing more than 100 pounds, capybaras are the world's largest rodents, and Garibaldi is one of their most prominent ambassadors. He raises capybara awareness through the ROUS Foundation for Capybara Veterinary Medicine, which Melanie founded in conjunction with Texas A&M College of Veterinary Medicine about three years ago.

According to Melanie, rodents make up more than one fourth of all mammals, but most Americans have never heard of capybaras. When she takes Garibaldi, or Gari, out in public (yes, he goes for walks on a leash like a dog), people's reactions range from curious to downright hostile.

But there's no need for the attitude, because Gari is actually a nice guy. Melanie says capybaras have fur like straw and a voice like a Geiger counter, and they are very smart and affectionate -- "somewhere between a dog, a cat, and an otter." They'll walk on a leash and they love to swim, but, like a cat, their love doesn't come easy.

"You have to earn their love," Melanie says. "The love of a basically wild animal is a special kind of love. It has not been conditioned into them for centuries. If they love you, it is honest, genuine, and intense."

Gari is also playful, especially in the water. He and Melanie spend long afternoons lounging in the pool together. And like a kid, he likes to make an occasional splash.

"He loves me to spin him or to pull him around by his forepaws or to pick him up and throw him over backward," Melanie says. "And on warm days, he will sit in my lap for long periods where we both basically float and relax in the water. There is no other animal that I know of that you can have this kind of aquatic relationship with." 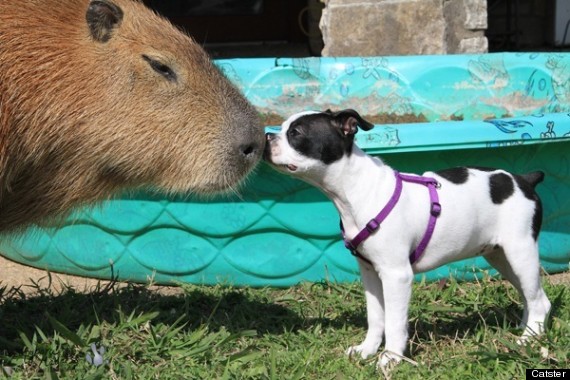 Melanie first discovered capybaras were a thing on a trip to Venezuela with her daughter, Coral, in 2007. On a sightseeing tour, they spotted capybaras in the wild, and their tour guide let Coral hold one of the babies.

That moment, Melanie says, changed their lives. When they got home, Coral researched how to keep capybaras as pets, and soon Melanie had adopted her first capybara, Caplin ROUS. Like Gari, Caplin was a capybara ambassador, visiting schools and interacting with the public. He immediately won Melanie’s heart.

“He became the entire focus of my life,” she says.

Unfortunately, Caplin passed away from a liver condition when he was only three years old. Melanie was devastated. She wasn’t sure she was ready for another capybara, but when she heard about 10-month-old Gari, who at the time was soon-to-be homeless in Ohio, she couldn’t say no.

Melanie says Gari has done an excellent job filling Caplin’s shoes, but as with any pet, there have been challenges.

“[Gari] was not socialized much as a baby, so we’ve been working through some issues," she says. "But he is a very sweet, affectionate capybara who gets along with everyone. Annoyingly for me, he likes my husband better than me, even though I am the one who does everything for him.”

So where does the cat come into play? The handsome kitty's name is Flopsy the Killer Cat, and he lives with Melanie’s daughter, Coral, and comes for regular visits. He showed up at Melanie’s house as a stray in October 2011. She couldn’t adopt him herself because her husband is allergic, but the friendly cat followed Melanie everywhere -- even on car rides.

“Garibaldi often leaves the door to the house open, so I guess I shouldn’t have been surprised when Flopsy showed up at my desk one day while I was working on the computer,” Melanie says. “Coral often says, ‘That cat is so annoying. I would totally get rid of him if he weren’t the best thing that ever happened to me.’”

It took Gari and Flopsy about a year to become comfortable with each other. At first, Flopsy was not at all sure about Gari, thinking him more weirdo than magical new friend. 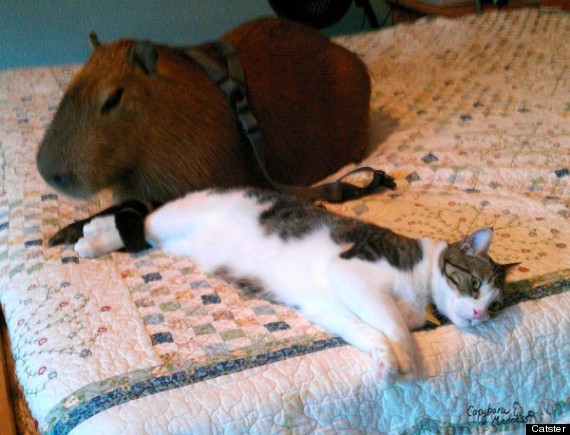 “I would see him out in the yard stalking Gari,” Melanie says. “He’d make a lunge for him, stop five feet off, and run away. I think there was a bit of a mental conflict going on.”

But now Flopsy greets Gari with headbutts each time they see each other. Gari desires more closeness than this -- he wants Flopsy to be his snuggle buddy -- but Melanie says Flopsy “isn’t that type of cat.”

The adventures of the unlikely “cat y ‘bara” duo has inspired Melanie to create a series of children’s books about a cat named Celeste who befriends giant hamsters. This makes perfect sense -- as 100-pound rodents that love to snuggle, capybaras do lend themselves rather naturally to fantasy.

“In some ways capybaras are even more magical than unicorns,” Melanie says, “because they are real.”

About Angela: This not-crazy-at-all cat lady loves to lint-roll her favorite dress and go out dancing. She also frequents the gym, the vegan coffee joint, and the warm patch of sunlight on the living room floor. She enjoys a good cat rescue story about kindness and decency overcoming the odds, and she's an enthusiastic recipient of headbutts and purrs from her two cats, Bubba Lee Kinsey and Phoenix.