From the ever-increasing "promises kept" department: Edmunds.com reports that Ray LaHood, the former Illinois GOP congressman who was picked by President Obama to serve as Secretary of Transportation, told the Senate Commerce Committee this week that Mr. Obama "won't have to push me very hard" to get his Department of Transportation to increase corporate average fuel economy, the CAFE standards, beyond the 35 mpg level approved by Congress in 2007.

LaHood made the comment as he was promising the committee he'd do all he can to get the first fuel economy rules in place by April 1, 2009, the deadline for implementing the initial phase of the new CAFE standards for 2011 model year cars and trucks.

Automakers selling vehicles in the US must improve average fuel economy by 25 percent between the 2011 and 2015 model years, with the increase to 35 miles per gallon to come by the 2020 model year.

George W. Bush, though, was so busy relaxing existing air pollution standards, opening public lands and offshore areas to oil drilling and granting some pardons as he left office that the development of any realistic enforcement plan for these CAFE regulations was left completely to the new administration. 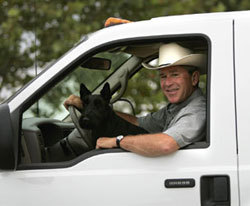 (Barney in his lap, no shoulder harness; yep, he's a lawbreaker. To quote, of all people, Gerald Ford, "Our long national nightmare is over").

LaHood's appointment in a Democratic administration is keeping with Bush's appointment of former California Congressman Norman Yoshio Mineta, a Democrat, to the same Transportation Secretary position in his White House.

Three other things happened the past few days which I never thought I'd see:

Second, in a CNBC interview, General Motors product czar Bob Lutz, the man who, in previous gigs, helped create the BMW 3-series and gave the go-ahead for gas-guzzlers including the Dodge Viper and Plymouth Prowler, calling for higher gasoline taxes. "I don't want to be the first car company executive to go on-the-record calling for higher gas taxes," he told CNBC's Phil LeBeau, but conceded low gasoline prices are a problem for an industry trying to quickly develop high-mileage vehicles.

A peculiarly-American form of amnesia means the lower the price of gas, the fewer high-mpg vehicles are sold.

Finally this week, Mike Jackson, who for many years ran operations in North America for Mercedes-Benz, and is now the CEO of gigantic retailer AutoNation, joined Lutz's call.

He also said touting E85 (ethanol) as a solution is "a joke" because its use is virtually nil. Because the government subsidizes the companies that blend E85, promoting that fuel has led the government to pay the oil companies "millions of dollars."

He said one solution would be a $1-a-gallon gasoline tax phased in over five years.

It may not seem like much, but executives at Jackson's and Lutz's rarefied levels in the auto industry publicly calling for higher gas taxes is tantamount to George W. Bush falling asleep at night while reading Shakespeare - it has just never happened.

But in fact, based on 2005 numbers as reported by Google Answers, adding a one dollar tax to each gallon of gasoline sold in the US would generate $138,142,791,000. As the late Illinois Sen. Everett Dirksen was fond of saying, "A billion here, a billion there and pretty soon you're talking about some real money."

But the bigger news is that Toyota will continue to sell the current Prius side-by-side with the new model. It's a shot across the bow aimed at Honda and their 2010 Insight hybrid (which looks an awful lot like the current Prius). This will give shoppers a choice between a new Prius, expected to be priced higher than the all-new Insight, and the current Prius, at the same or perhaps lower price than Insight. 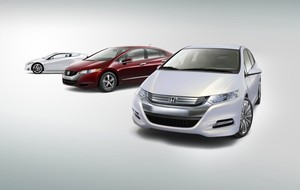 US sales of hybrids fell 9.9% in 2008, after rising with gasoline prices early in the year and falling along with fuel costs and the collapsing auto market at its end.

Meanwhile, the Detroit News says California Gov. Arnold Schwarzenegger (I'll never get used to that phrase) and the head of CARB, the California Air Resources Board, have written President Obama, asking him to immediately grant their state and at least 13 others the right to impose their own tailpipe emissions standards.

Reaction to the request has been swift, at least from America's new car dealers.

At the annual convention of the National Automobile Dealers Association, currently underway in New Orleans, a report was released by the group titled, "Patchwork Proven: Why A Single National Fuel Economy Standard Is Better for America Than A Patchwork of State Regulations." 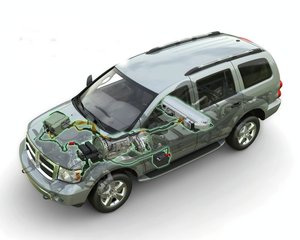 (The Dodge Durango Hemi Hybrid and its twin, the Chrysler Aspen, may have been the shortest-lived models ever produced by a large carmaker).

The study claims that "a single, national fuel economy standard is the best way to save fuel and reduce greenhouse gases from motor vehicles. A federal mileage standard provides that certainty and stability, giving automakers a road map to produce the fuel-efficient cars of tomorrow. CARB's patchwork regime - with its exemptions, loopholes, and unintended consequences - would prolong the economic dislocation in the auto sector for little to no environmental benefit."

The new administration appears intent on setting higher standards for mpg and emissions for all cars and trucks sold in the US. What new assistance the Detroit Three might receive from Washington to meet those standards remains to be seen, but most all involved say the $17 billion in loans which GM and Chrysler will have received by mid-February won't be enough to keep their doors open without other massive infusions of cash.

Assignment: In what condition do you think the Detroit Three - and the imports - will be 18 months from now?