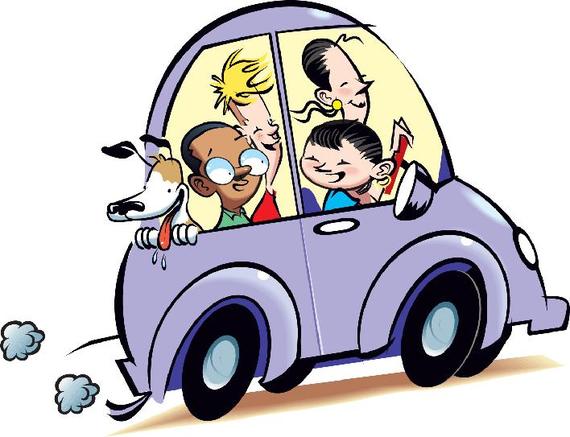 I remember the first car pool I ever drove. The facts are fuzzy. I don't remember the car I drove, the kids' names, (other than my own kid's), nor even if the darlings needed to be belted in (probably not -- it was 1974).

What I do remember is my feelings about driving my first car pool. It marked a new stage of life. And I recall waking up that morning feeling very adult and nervously reviewing the stanzas of all my favorite nursery rhymes in my head.

Each time I picked up another four-year-old on the car pool list that day, I jumped out of the car to open the door for them though their mothers were right beside them. I gave them a welcoming hug and a goody bag filled with raisins and graham crackers -- nutritionally sound to make a good impression on the mother (who seemed much older, much more mature, and much more experienced than me). I also included stickers and a stick of gum in order to make a good impression on the kid.

When all were picked up, I embarked on my pre-rehearsed litany of nursery rhymes -- reciting each with appropriate (but speedy -- after all, I was in the midst of driving) hand gestures and wild variations of voice volume, pitch and tone to keep their short attention spans focused.

By the time we reached nursery school, we were all exhausted -- me from my performance and them from the avid participation I had demanded.

Fortunately for all concerned, my interest in high intensity interaction with the pre-school gang waned rapidly. After my initial run, I observed how other mothers behaved and I also questioned them. All veteran car pool drivers concurred. "Get a life, Mom, and stay out of theirs."

And as the four-year-olds became five-year-olds and then six-year-olds and older, I also became adept at listening. I fine tuned my auditory skills and realized by being unassuming and quiet while driving a car pool, I had a window into a world few were privy to enter twice -- childhood.

I watched from the sidelines, content for them to think I was a fossilized humanoid helplessly living in the past. I wasn't the only parent experiencing anonymity. One friend tells me of his adolescent daughter and her buddies bantering back and forth about the most intimate of sexual maneuvers that they had just read about in a recent issue of "Cosmopolitan Magazine." They totally ignored his presence -- spoke as if he were feeble and pathetic -- a middle-aged relic without ears, eyes, thoughts and feelings.

What I didn't learn at breakfast, dinner or right before lights out, I learned by driving my child and his cronies to school, to the movies, to dances, to practices, and to games. Before we picked the others up, our moments together were sometimes spent silently, sometimes spent angrily, sometimes spent with both of us lost in our private thoughts while the radio blared music I would never listen to if I were alone. But, sometimes, a confidence was shared -- a new idea explored -- in that exquisitely compact segment of minutes between pulling out of our driveway and picking up the first friend.

Every time I drove, I went through parts of my highly evolved check list: Did he laugh easily with his friends? Was he naturally part of the group? Were the kids he was hanging out with the "right" kids? Was their language within acceptable limits? Were the things that they were laughing about, literally behind my back, harmless, semi-troublesome or serious concerns?

Sometimes they poked each other in the ribs, rolled their eyes, whispered behind hands held closely over their mouths so the "enemy" (ME) wouldn't hear. Their verbal discourses had a fungus-like quality -- ideas once uttered took on a life and vibrancy of their own and each kid chimed in with more details and embellishments.

Keeping my antenna perky, I'd pick up from a dance -- and from the way my kid walked out -- his body language, his gait, his expression -- I could tell whether he had had a good time or not. Questions about his self-esteem and confidence level were answered by looking -- without a word exchanged.

Whether he was alone, sullen, animated or pouting, I got to know the nuances of his expressions -- even how he opened and closed the car door gave me insight into his mood. The road my car pooling took me on was literally a road into the arena of teenage angst, joy, and trauma.

I began to think that my days of driving car pools would go on forever. I really did. But, of course, after each one of my five sons passed his driving test, my days of car pooling dwindled. And then stopped altogether.

Now my car's interior is so clean. And so quiet. And my back seat so empty. My boys have grown and gone. My information pipeline to their lives and thoughts is now more circuitous, less accessible and much more opaque.

Some days at 3 p.m., an overwhelming yearning envelopes me and I realize how much I miss those car pool days.