Cara Phillips, a Brooklyn-based artist from Detroit, is drawing inspiration from dermatological offices and medical portraits for her photographic series, Ultraviolet Beauties. Taken on the streets of New York City, the images capture willing strangers who were lured by Phillips' "Free Portraits" sign and volunteered to be photographed under UV lights. She used the same ultraviolet technology as skincare professionals use to create these black and white works, snapping her sleeping beauties amidst glaring crowds instead of inside the confines of a private doctor's room.

Ultimately, her work forces us to reexamine the conventional portrait, a flattering snapshot of a person intended to mask all imperfections and manipulate beauty. Her "anti-portraits" instead emphasize flaws while creating something that remains innately beautiful. We asked Phillips a few questions about her work:
Scroll down for images. 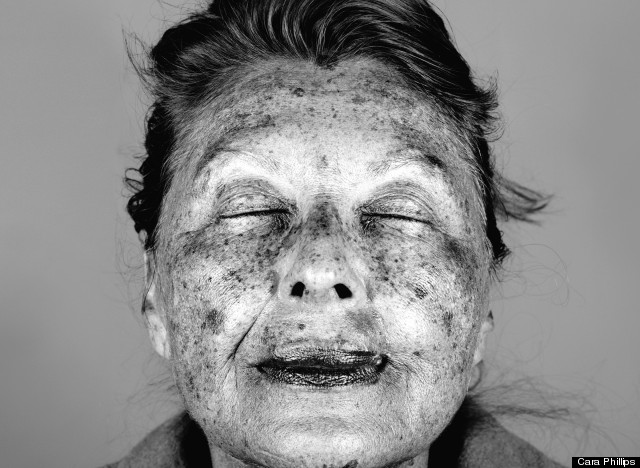 HP: Most ultraviolet photography is used to expose imperfections in people's skin, yet you've titled your work Ultraviolet Beauties. What beauty were you trying to reveal through these types of portraits?

CP: When I was doing research for my first body of work, Singular Beauty, a series of interiors of cosmetic surgery offices, I came across B&W images of people with their eyes closed on doctors and medi-spa websites. I was immediately struck by the portraits, and discovered that they were made using a type of medical photography that reveals flaws beneath the skin that is invisible to the human eye.

My first thought was that the images reminded me of early post-mortem/memorial photographs, but they were also a kind of anti-portrait that was new to me. The aim of a portrait, in commercial and vernacular photography, is primarily to hide flaws -- to present a two-dimensional "flawless" version of the person. Even before photoshop, photographers would hand paint negatives to enhance or improve the subject's appearance. But these images' function was to enhance and reveal flaws. However, the images themselves were beautiful, and I found that dichotomy intriguing and decided to push it even further. 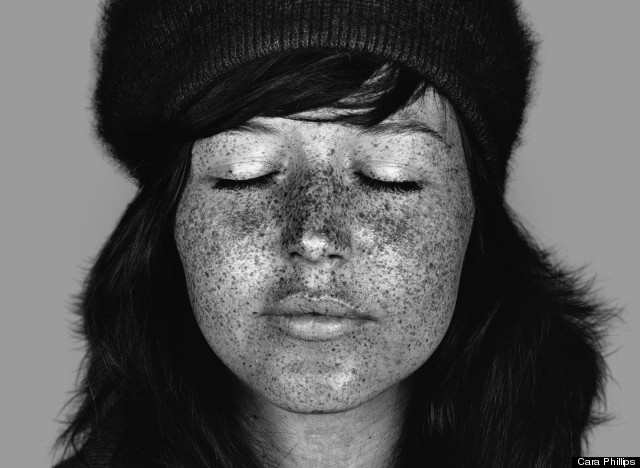 HP: You use the same UV technology as skin care professionals. Did you need to conduct research on the process beforehand and did you need to alter any steps to produce more intimate results?

CP: It took close to a year for me to figure out the technology because I wanted to use my own camera and the cost of the medical camera was far out of my reach. Once I had the ultraviolet process deciphered, I spent quite a bit of time thinking who I should photograph. And instead of focusing on subjects who were already "concerned" with aging and beauty, I thought it would be interesting to offer these "flaw" photos to anyone. In terms of intimacy, it was the closed eyes that originally drew me to the portraits. In the medical versions, it is done to protect them from the UV lights--and even thought I was using regular lights, I wanted to keep that feature. The closed eyes changes the viewer relationship to the subject and makes the image simultaneously revealing and restricting. 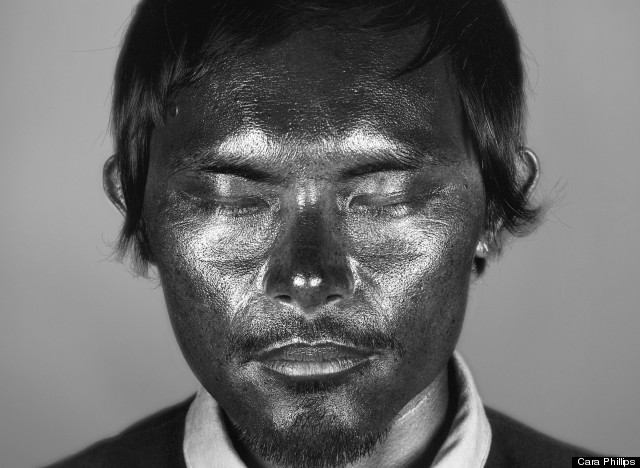 HP: What was it like to shoot these photographs on the streets in New York City? Did you have to coax your subjects into sitting for you or did you find that people were pretty willing to do an impromptu photo shoot?

CP: It was both amazing and challenging. There were financial constraints, so I had to maximize every day of shooting, which meant shooting for more than 8 hours straight. However I was very lucky to have a group of amazing assistants, who all volunteered their time to help out. And I assumed going into it that New Yorkers, as a suspicious and jaded group, would be resistant, but I was pleasantly surprised at how open people were. It was very intense for me to have strangers let me "look inside them" while both of us were being watched by a group of on-lookers. It is amazing that the resulting portraits convey such a sense calmness and contemplation.

HP: Your past projects have also dealt with issues of beauty, like your photographs of the interior of cosmetic surgery offices. Do you see yourself continuing to focus in this realm?

The camera can be an amazing tool to collect data, however I'm not interested in using that data to give definitive answers. I like to think of photography as a means to provoke questions in the viewer. And if anything, beauty, body issues, and aging are becoming bigger issues in our culture, so I am still interested in exploring the issue. But I am also working on some other projects that are not related.