NEW YORK -- Javier Sicilia took one last drag on his cigarette before tossing it in front of a downtown HSBC bank branch. He then strode into the bank lobby, followed by fellow demonstrators and a dozen police officers, returning outside a few minutes later with a black briefcase filled with $1 bills dotted in red.

Sicilia then grabbed a fistful of the cash and threw it on the sidewalk in front of the bank.

"En este banco se lavan dinero!" Sicilia shouted, jabbing his finger behind him. "In this bank, they launder money!" someone translated as the noted Mexican poet repeated himself in Spanish.

Sicilia was joined in a protest Friday by some 100 Mexican and American activists as part of a 6,000-mile "Caravan for Peace" against the international drug war, in which his son was killed a year-and-a-half ago. After speaking about failed drug policies on the steps of City Hall, Sicilia and the group marched to a branch of HSBC.

A Senate investigation revealed in July the bank's lax controls have allowed deadly drug cartels to launder billions of dollars through its U.S. operations since 2005. In a statement released prior to a hearing on the Senate report, HSBC said executives would formally apologize for the bank's actions.

"We will acknowledge that, in the past, we have sometimes failed to meet the standards that regulators and customers expect," the statement said.

During his speech at City Hall, Sicilia said "corrupt bureaucrats" have only profited from the war on drugs.

"This war has not diminished at all the demand for drugs," Sicilia said through a Spanish translator. "It has increased violence, criminality, robbery, extortion, kidnapping, and human trafficking exponentially. It has murdered thousands of innocent human beings. It has ... corrupted many other thousands."

In March 2011, drug gang members suffocated Sicilia's son Juan Francisco Sicilia Ortega and his six friends in Mexico after a bar fight. Drug violence in Mexico has resulted in the deaths of some 60,000 people over the last few years, the Caravan for Peace estimates. In the first half of 2012 alone, government statistics show 21,500 homicides were committed in Mexico, though the government does not provide official statistics on killings that are specifically drug-related.

"The strategists of President Calderón against the drug dealers and the drug wars has created a multiplication of mass criminal bands in Mexico," Sicilia told The Huffington Post. The criminals kill people like his son, he said, and feed off the profits of illegal drugs sold in Mexico and smuggled into the United States.

Robert Suarez, a harm reduction worker at the Washington Heights Corner Project and member of VOCAL-NY, said most Americans may not feel the direct violent affects of the drug war, but they are felt every day when drug abuse is criminalized.

"I myself am an orphan to this war. I lost my mother to AIDS because there was no needle exchange when she was injected," Suarez said, adding that needle exchanges are still illegal.

Two weeks ago, Suarez' friend overdosed in a park. "The people he was with were too afraid to call the police or dial 911," he said.

Suarez and other speakers noted over-incarceration for mild drug offenses and petty crimes committed by addicts to feed their habits create further casualties in the drug war.

In New York last year, police made 50,680 arrests for the lowest-level marijuana possession offense, according to the Drug Policy Alliance. Those arrests cost the government more than $75 million.

Many of these low-level drug arrests result from the NYPD's stop-and-frisk policy, which critics say unfiarly targets young black and Latino men.

"This was a war begun by racist politicians who wanted to demonize people of color," Suarez said, his voice booming.

Another member of VOCAL-NY, Robert Tolbert of the Bronx, told The Huffington Post that New York needs fairer policing.

"We need to change the thinking of drugs," said Tolbert, adding he has personally battled with heroin and cocaine addiction. "We need to treat it as a health issue, not a criminal one."

Sicilia said marijuana and other "soft drugs" should be regulated like alcohol and tobacco.

"We have to regulate it within the rules of the market and the state," he said. "That would help a lot to stop violence."

After his son died, Sicilia wrote a final line of poetry: "The world is not worthy of words / they have been suffocated from the inside / just as they suffocated you."

Since then, Sicilia has committed to demonstration and not written poetry.

"I don't write poetry anymore," Sicilia said. "One looks, hears, and talks from the perspective of poetry. Simply speaking to make visible the pain of this war is a form of poetry."

As cops cleared Sicilia from the HSBC bank branch, another activist who lost her son to the drug war picked up a dye-soaked bill from the sidewalk and held it in front of her. 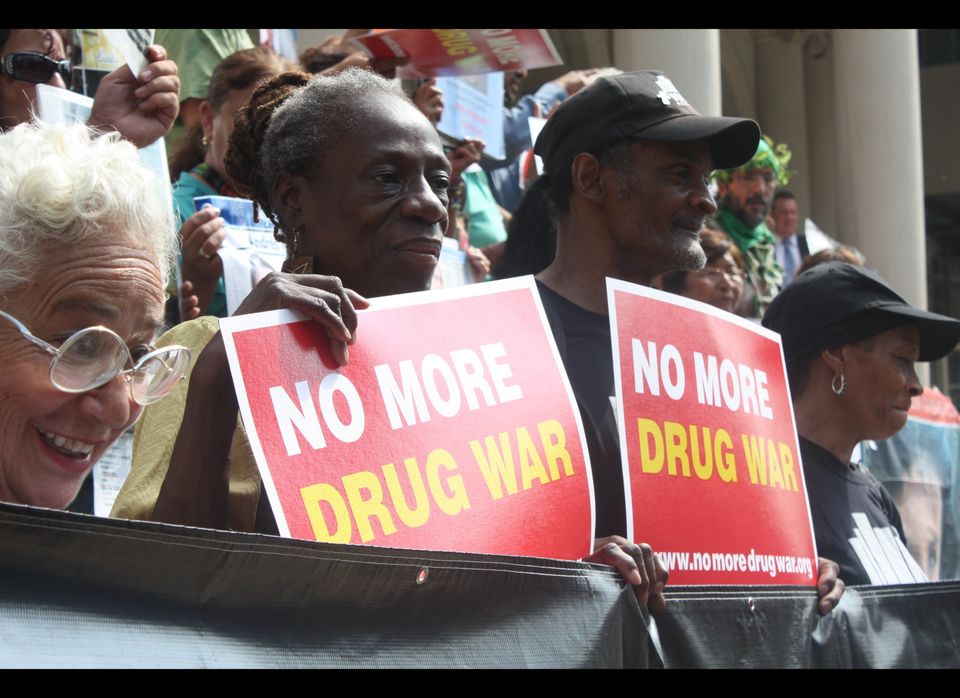 1 / 19
Members of VOCAL-NY join the Caravan for Peace on the steps of City Hall Sept. 7, 2012, to protest the "failed" war on drugs in Mexico and the United States.
Anna Sanders