Watts spent more than $156,000 of money earmarked for marketing his show, Merrick and the Highway Patrol, to modify a 1973 Ford Landau -- the same car used in Mel Gibson's "Mad Max" movies -- so that it has a fully functional grill in the trunk.

Called the "Carbeque," Watts believes it's an answer to a question that has been plaguing people since the first tailgating party.

The grill is actually integrated with the engine. The same gas that powers the car also cooks the meat.

"How many times are you driving somewhere, and there’s nowhere you can have a barbecue," he told The Huffington Post. "You just pull over, and you start cooking!"

Show producer Elle Conwell said that the Carbeque will be used for promotional appearances.

"We can cook nine [10.5 ounce] T-Bone steaks at one time," she told HufPost. "[That means] the Carbeque can pump out around [35 pounds] of steak within the hour, or around 200 sausages. The roasting hood means that this Carbeque is ideal for cooking multiple dogs at anytime -- depends on your taste. Maybe three chihuahuas or one larger German shepherd?"

The radio show has had its share of crazy food stunts before the Carbeque, including something called "Turducken Ridiculous," where 20 animals were shoved inside each other and cooked.

The Carbeque is getting support from some auto experts such as James May of the BBC series, "Top Gear," who liked the idea with some caveats.

"When I first read the message, and saw it’s a car with a BBQ, I thought we’ve done that, but then I looked at the pictures, and I thought, hang on, this is an actual integrated BBQ," he told Conwell by email. "It strikes me that in the modern world you have to make your accessories and devices multi-tasking, you should be cooking whilst driving to an event, otherwise you might as well just drive to a restaurant.

"Part of the problem is a physics one. There will be a whole separate market for this, you need to develop square sausages that don’t roll about… it could work!"

However, no one has actually attempted to use the grill while driving -- for a very good reason.

"The V8 engine means that unless you like your meat with a smoky unleaded fuel taste, this may not suit most palates," she said. 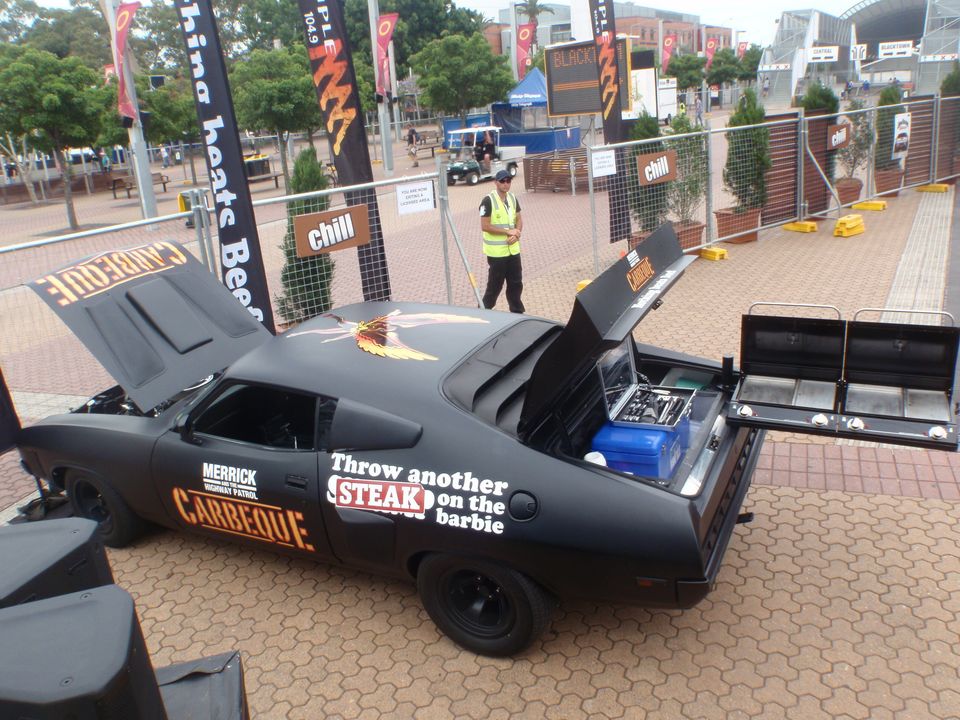 1 / 9
Carbeque
Tailgating parties may never be the same with the creation of the Carbeque, an automobile where the grill is integrated into the car's engineering.
Merrick And The Highway Patrol