Within the voluminous report from the U.N. Intergovernmental Panel on Climate Change (IPCC) published on Sept. 27 is a conclusion as sobering as any climate change warning to date.

The world is currently on track to emit enough greenhouse gases by about 2040 to exceed the globally agreed upon temperature target of 3.6°F (commonly referred to in international negotiations as the 2°C target), beyond which the risks of “dangerous” consequences of global warming escalate.

In laying out a global cumulative carbon budget, the IPCC has for the first time endorsed the view of climate activists and scientists who have warned that countries cannot burn the world’s known reserves of fossil fuels without sending the climate system into a tailspin.

If climate change exceeds the temperature target, scientists warn, there is a greater risk that the world’s ice sheets will be destabilized, leading to sharply rising seas, and increasing climate extremes such as droughts, heat waves and floods, which could pose daunting challenges for food and water availability for growing populations. In less likely worst-case scenarios, feedback loops within the climate system could disrupt ocean currents.

Staying under that temperature target is a daunting challenge, given the lack of progress to date in arresting emissions of climate-warming greenhouse gases. In order to meet the temperature target, the IPCC report made clear, the reality is that much of the planet’s known and economically recoverable supply of fossil fuels will need to be left in the ground. 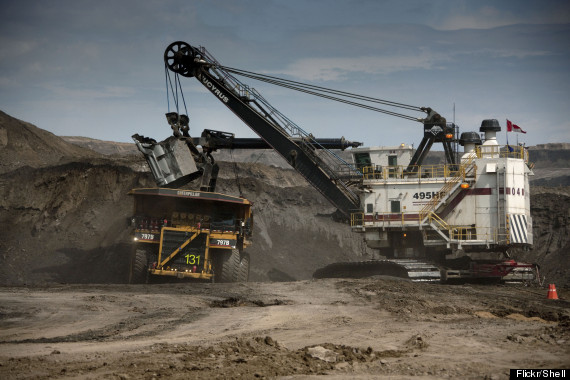 Digging equipment at an Alberta oil sands mine, pictured in 2009. Credit: Flickr/Shell.

Living Within a Carbon Budget

Based on studies published during the past several years, the IPCC found that in order to have at least a 66 percent chance of limiting global warming to, or below, 3.6°F above pre-industrial levels, no more than 1 trillion tonnes of carbon can be released into the atmosphere from the beginning of the industrial era through the end of this century.

The IPCC report estimates that we’ve already used 531 billion tonnes of that budget as of 2011 by burning fossil fuels for energy as well as by clearing forests for farming and myriad other uses. That means we’re on the wrong side of the carbon budget, with 469 billion tonnes left.

According to a 2009 study published in the journal Nature, burning all proven and economically recoverable fossil fuel reserves — never mind other potential new fossil fuel discoveries — would pump another 763 billion tonnes of carbon into the atmosphere. That would be enough to exceed the carbon budget and, most likely, set the globe on track to sail past the temperature target.

What’s worse is that the budget may even be smaller since emissions other than carbon dioxide (CO2) also contribute to global warming. Factoring in some of these shorter-lived climate pollutants, such as nitrogen oxide and soot, brings the overall cumulative budget down from 1 trillion tonnes of carbon to 800 billion tonnes.

With that in mind, the remaining budget is even smaller, leaving just 269 billion tonnes of carbon left. To stay within the budget, global emissions would have to peak by 2020, and then become negative – with more carbon being taken out of the atmosphere by plants and the oceans than is put into the air each year — by 2090.

The IPCC report also said that a possible release of greenhouse gases from thawing permafrost and methane hydrates — which are “not accounted for in current models” — would shrink the remaining budget even further.

“I think the numbers themselves are a very depressing reminder of how time is running out quickly,” said Kelly Levin, a senior associate at the World Resources Institute, a nonpartisan research group.

Projections of global mean sea level rise over the 21st century relative to 1986–2005 from the combination of the computer models with process-based models, for greenhouse gas concentration scenarios. The assessed likely range is shown as a shaded band. The assessed likely ranges for the mean over the period 2081–2100 for all scenarios are given as coloured vertical bars, with the corresponding median value given as a horizontal line. Click image to enlarge. Credit: IPCC Working Group I.

That’s because the current rate of oil and gas production coupled with the lack of global political momentum to reduce emissions appears to have us on course to burn right through the carbon budget like a teenager at the mall with their weekly allowance.

The cumulative carbon budget is akin to a climate change credit card, where every month you charge more than you pay off leads to ever increasing unpaid balances. With a credit card, the longer you keep overcharging, the larger the bill you have at the end, and the more difficult it becomes to pay down. Similarly, the longer it takes for carbon emissions to peak, the steeper emissions will have to fall in order to keep warming temperatures in check.

As with a credit card, which involves interest rate charges, there’s an important catch with the climate budget: the climate change that results from today’s emissions will remain locked into the climate system, leaving a climate debt to future generations to deal with. For example, the IPCC report found that sea levels would continue to rise for centuries after the climate is stabilized at a given level of warming, and air temperatures would remain elevated long after emissions reach their peak as well.

To keep that debt from mounting, the 2009 Nature paper found that less than a quarter of the available and economically recoverable fossil fuel reserves can be burned between 2009-2050 in order to meet the 3.6°F temperature target. That’s in line with the IPCC’s numbers, and would require a dramatic change of course for the global economy.

Before the new IPCC report was released, advocates of leaving much of the global fossil fuel supply in the ground were just beginning to make themselves heard in the halls of power. One of the most prominent advocates is author and environmentalist Bill McKibben, co-founder of 350.org. His group has been fighting against approval of the Keystone XL pipeline, which would transport unconventional oil from the oil sands of Alberta to the Gulf Coast. They are also leading a movement to push colleges and universities to divest their endowments from fossil fuel companies.

“At this point, it's very clear that climate hope mandates keeping carbon where it's been safely squirreled away for the last many million years: underground,” McKibben told Climate Central in an email.

McKibben sees the fight over the oil sands and the divestment movement as the first major battles to bring carbon “spending” under control.

Climate scientist turned activist James Hansen has also argued that much of the world’s economically recoverable fossil fuel reserves, particularly coal, need to remain unexploited in order to limit global warming, calling use of the oil sands “game over” for the climate. 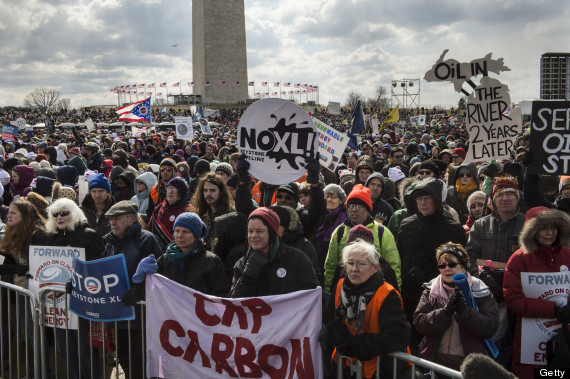 A scene from a 2013 climate change protest in Washington that focused on opposition to the Keystone XL Pipeline.

Will carbon budgets be incorporated into a new climate treaty?

The IPCC report is part of the scientific panel’s fifth major assessment of the state of climate change scientific research, but it’s the first to endorse the concept of a global carbon budget. The information the IPCC provides is meant to inform policymakers, particularly through the international climate talks under the U.N. Framework Convention on Climate Change (UNFCCC). Negotiators are seeking to craft a new global climate treaty by 2015, to go into effect in 2020. The carbon budgeting approach would be a change from the typical discussion of country emissions targets, which has dominated the UNFCCC process to date.

For example, under the Copenhagen Accord of 2009, countries pledged to reduce their emissions to certain targets by a particular year. The Accord therefore allows room for emissions to grow in the meantime, but it doesn’t take into account the recent findings about the importance of the carbon budget approach.

“There is something really important about the notion of the carbon budget, it’s not just a point in time that you need to get to a certain emissions level,” Levin said. “The notion of a carbon budget needs to be taken into the negotiations because it really calls for a multi-year target,” she said.

Atmospheric CO2 levels hit a record high of about 400 parts per million in 2013. Click image to enlarge. Credit: Climate Central

Levin said that based on the IPCC report’s findings, it is going to be very difficult for the global community to meet the 3.6°F temperature target if emissions don’t peak by 2020 and begin to decline sharply thereafter. She said international climate talks should include a “hybrid approach” involving both peak-year emissions and emissions rates in the intervening years.

“There is a precedent and from my perspective it has much more environmental integrity,” Levin said.

So, how likely is it that energy companies and governments will choose to leave a large portion of relatively cheap energy sources in the ground, rather than continuing to exploit such fuels to power the global economy?

Levin said that there are signs that the business community, including energy companies, is becoming more aware of the risks that climate change poses to their bottom line. For example, the World Economic Forum identified climate change as one of the top business risks facing the global economy, and insurance companies have been urging Wall Street to take action to reduce its climate risk exposure.

"There is clearly a growing awareness that the size of our carbon budget will determine the scale of changes that will be with us for centuries to come,” said P.J. Partington, a climate policy analyst with the Pembina Institute, which promotes clean energy and greenhouse gas emissions reductions in Canada. “Investors and governments need to consider these constraints when making investments and setting policy.”

So far, world leaders haven’t shown a willingness to commit to an ambitiously tight carbon budget. The fate of the Keystone Pipeline, which may be decided this year, may send a signal about whether the IPCC’s carbon budget is being taken seriously by policymakers, as will the outcome of the next round of climate talks, set for next month in Warsaw.