In May 2013, it was big news when, for the first time, the concentration of carbon dioxide in the atmosphere hit 400 parts per million. Now, researchers say that number has been consistently above 400 for the last month.

"This is higher than it's been in millions of years," said Pieter Tans, a senior scientist with the National Oceanic and Atmospheric Administration's Climate Monitoring and Diagnostics Laboratory.

Parts per million, or ppm, is a measure of the ratio of carbon dioxide to other gases in the atmosphere. Carbon dioxide is just one type of greenhouse gas that has been found to trap heat, but it is the primary one emitted from human activities and it lingers in the atmosphere for a very long time. There is typically seasonal fluctuation in the parts per million (ppm) of carbon dioxide, according to scientists who track the levels. That explains why, after hitting 400 for the first time in recorded history last May, the levels declined soon after. But they hit 400 ppm again in mid-March, and have stayed above that level for all of April. 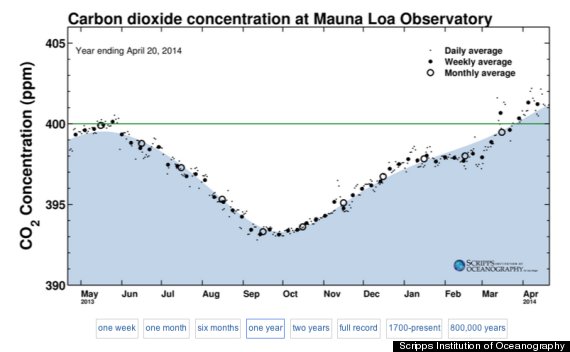 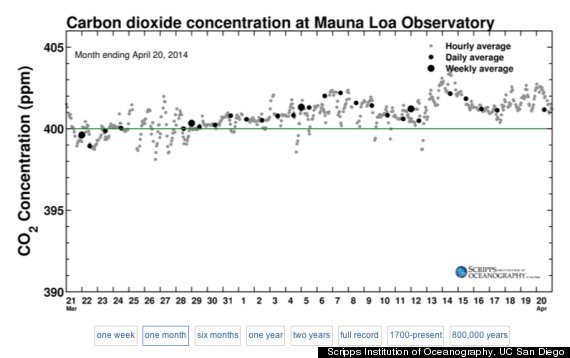 As of April 20, the level of carbon dioxide in the atmosphere was 401.17 ppm. That figure is based on readings from the Mauna Loa Observatory in Hawaii. The scientists who monitor atmospheric carbon dioxide levels expect that levels will stay above 400 ppm until late June or July.

Tans said that the level of CO2 in the atmosphere is now increasing at a rate that is at least 100 times faster than it has been at any time since record-keeping began. At some point next year or the year after, based on current rates, carbon dioxide levels will rise above 400 ppm and will not be likely to fall below that mark again.

The amount of carbon dioxide that gets naturally absorbed from the atmosphere varies according to the time of year, said Tans. During late spring and early summer in the northern hemisphere, trees and plants take in more carbon dioxide from the atmosphere. But as emissions generated by human activities rise, those cycles can no longer offset them. "We are basically overwhelming natural uptake processes," said Tans.

The late Charles David Keeling, a renowned scientist affiliated with the University of California, San Diego, began keeping daily measurements of atmospheric carbon at Mauna Loa in 1958. The record showing the increasing carbon levels at the observatory is today known as the "Keeling Curve." His son, Ralph Keeling, is now the director of the CO2 program at the Scripps Institution of Oceanography at UC-San Diego and has continued to record those levels since his father's death in 2005.

The younger Keeling says the importance of the 400 ppm figure is largely psychological. While there isn't a substantial difference between the impacts of 395 ppm and 405 ppm, crossing that threshold makes it impossible to ignore that something serious is happening.

"When you focus on the fact that it's moving through thresholds like that, you get an appreciation for how it's actually changing," said Keeling. "It's a wake-up call about how much we've already changed the atmosphere."

"I think people accept the reality that CO2 is rising, but they don't have a grasp of what it means quantitatively," he continued. "I hope people remember this moment so that when the hear the carbon dioxide levels are 420 parts per million in a matter of years, they'll say, 'I remember when it was 400.'"

Based on current trends, 420 ppm probably isn't too far off. Currently, carbon dioxide levels are increasing by about 2 parts per million per year. And few countries have given any indication that they plan to cut emissions in the near future -- at least, not enough to affect the trajectory the planet is on.

"The momentum we're seeing right now, going upwards, I think is going to easily carry us through 450 parts per million," said Keeling. "And then I would say even stabilizing before 500 parts per million is probably not going to be very easy."

Bill McKibben, an author and co-founder of the group 350.org, criticized the U.S. government for not doing more to curb emissions. His group draws its name from 350 parts per million -- the level that some scientists have said is the maximum allowable for maintaining ecosystems and the human systems that depend on them.

"It's the planetary equivalent of going to the doctor and hearing your cholesterol is through the roof," said McKibben, "and our 'leaders' are like the patients who nonetheless won't take their medicine, won't stop smoking, won't start exercising, and won't change what they eat."