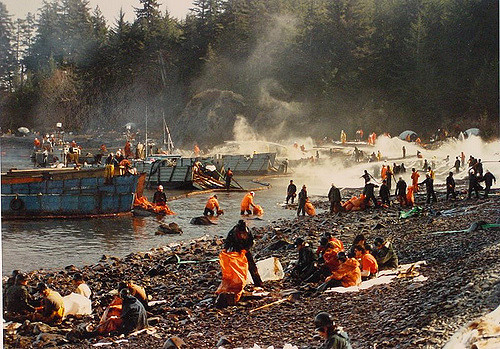 Clean up of Exxon Valdez spill by Jim Brickett via Flickr

The ice melted in the hot Texas sun, pooling outside the Meyerson Symphony Center in Dallas where the #exxonknew ice sculpture had been erected by climate activists - a visual reminder of the catastrophic costs of global warming at the center of protests during the company's annual meeting last week. Inside the air-conditioned center, shareholders demanded a different kind of knowledge from CEO Rex Tillerson: less fluff about the irretrievable past, and more about the way climate policy will impact future financial investments.

Exxon, BP and other oil majors, alongside multinational coal companies and other fossil-fuel industries, are finally facing increasing risk-management pressure in their quest to protect their share prices. However, little sympathy was found at the Symphony Center - or anywhere else - as they try to navigate downturns in the global energy markets, upticks in calls for divestiture, and very inconvenient truths about climate finance.

The inevitable carbon taxes in an evolving clean-energy future are what spooks investors and those accountable to them most. Fossil fuel companies are burning even more midnight oil, trying to come up with profitable scenarios shaped by carbon pricing laws and cap-and-trade plans. Their stubborn refusal to surrender their outdated business models ignores the fact that carbon pricing isn't just imminent, but is likely to work.

Carbon pricing strategies are designed to cut greenhouse gas emissions and accelerate the transition to solar, wind, biomass and other renewable options by increasing the costs of every ton of CO2 spewed out in the Earth's atmosphere. Global leaders on climate, including World Bank Group President Jim Yong Kim, Chancellor Angela Merkel in Germany, and for that matter even Exxon's Tillerson, agree on carbon pricing's value in transitioning the planet to clean energy use. Even the IMF's Christine Lagarde, speaking on the eve of the Astana Economic Forum recently, highlighted the merits of carbon pricing, calling it "the most effective policy for reducing emissions," and calling on the future Astana Expo-2017, which will bring together thousands of participants from all over the world to discuss "future energy", to work towards that end.

What governments, industry, activists and economists agree on is that "carbon costs" already exist, either through rising sea levels or through extreme weather phenomena. As the global community better understands these costs and their relationship to climate change, the consensus builds for creating a policy framework to assign these costs to the sources emitting carbon into the environment. That consensus rests on the understanding that carbon pricing will not impose new costs on the global community, especially in the face of mounting opposition from developing nations whose historic contributions to carbon emissions are low and are reluctant to accept further constraints.

Carbon pricing options that acknowledge the disparity, including a proposal by economists Thomas Piketty and Lucas Chancel, build climate justice into carbon pricing by using a global model that essentially delivers a progressive carbon consumption tax that shifts the emphasis to individual consumers rather than nations. According to their research, the top 10% of emitters are responsible for 45% of world emissions and live on all continents and in all countries. For example, in the middle of the global distribution, we find "the top 1% earners from Tanzania, the upper middle class in Mongolia and China as well as poor French and Germans."

The idea is an intriguing one. An individual tax would be a fair solution that would decrease world inequalities as well as carbon consumption. Indeed, every person's carbon consumption is a function of multiple variables such as lifestyle choices, diet, weather patterns and that variety should be taken into account. However, such a policy won't be, in and of itself, a self-sufficient solution, but should be coupled with various other measures such as cap-and-trade schemes, greener trade policies, tougher industrial environmental standards and, most importantly, enforcement.

Contrarians abound though, who have rejected the usefulness of carbon pricing. For example, Sir David King, Britain's Special Representative for Climate Change, argued in favor of green-tech investment and research, dismissing carbon pricing as counterproductive and punitive. Climate activists Judy Hindley and Brian Utton rebuffed King in a recent Guardian piece: The problem isn't a lack of technology, but a lack of deployment as clean energy is still comparatively more expensive than fossil fuels. If we were to increase the price of carbon-reliant energy sources, green tech would have the breathing space needed to proliferate and bring costs down.

That may be a tough sell to shareholders in Dallas - or London, or Paris - who insist shortsighted notions such on accurate data on expected future profits. But as the ice keeps melting, the maddening irony is that there is data, plenty of it from multiple disciplines, to support implementation of carbon pricing strategies and the imperative of a fossil-free energy future as the only way to guarantee the survival of the human species.