This is the last in a series of posts about using ecosystems to store carbon, and why this should be part of America's strategy for combatting global climate change.

Nature can be humanity's best friend or its worst enemy. Millions of Americans were reminded of that last year when they became victims of extreme weather. Weather killed or injured more than 2,600 of us and caused nearly $4.8 billion in property and crop damages.

Nature has always had a violent side, but it is only recently in geologic time that we humans have acquired the power to make natural disasters more disastrous. Anyone who is even vaguely familiar with climate change knows that we are adding to the severity and frequency of extreme weather by overloading the atmosphere with carbon dioxide and other pollutants. To make things worse, we have destroyed ecosystems that can remove some of the CO2 from the air.

That's the bad news. The good news is that we have opportunities to repair these so-called "carbon sinks". Doing so has multiple benefits beyond sequestering carbon. 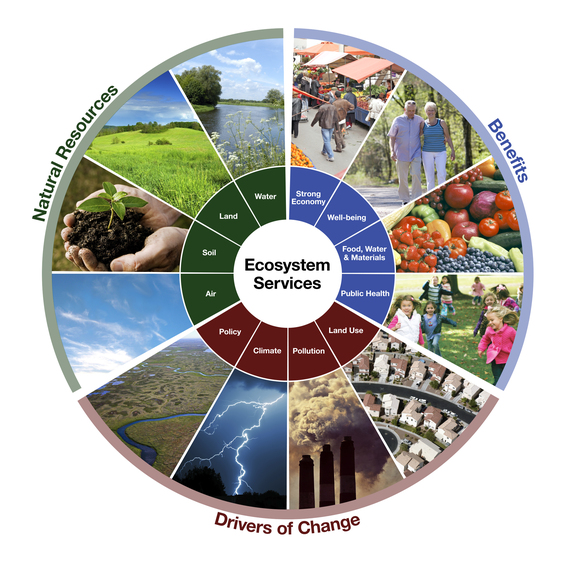 As I noted in Part 3 of this post, researchers are looking at engineered methods to capture and store carbon dioxide. Each involves known and unknown economic, social and environmental repercussions. Before we employ them, the safest and most sensible strategy to combat climate change consists of two parts. The first is to make the transition from carbon-based to carbon-free energy. Doing so realigns us with that immutable law of physics, "If you want to get out of a hole, stop digging".

Second, we should restore and protect the natural ecosystems that store carbon and provide fringe benefits that include water savings, flood protection, wildlife habitat, food security and many other services. This requires a very different mindset than we have exhibited in the past, where we either destroyed or tried to subdue the natural systems that got in our way.

Wetlands are one of nature's carbon sinks. More than half of America's original wetlands have been destroyed or degraded to make way for urban development and farming. Coastal marshes are another sink. The destruction of coastal marshes and the loss of shoreline to rising seas have increased the vulnerability of oceanside communities to flooding from storms.

Forests are carbon sinks. The U.S. Forest Service reports that wildfires are occurring on more than 7 million acres of land every year. Many are the result of drought or insect infestations connected with a warming climate.

Grasslands also are carbon sinks. An analysis published by Yale reports that less than 1% of our original tall-grass prairies remain in the eastern United States. The National Park Service considers them one of the world's most threatened ecosystems.

Soils are carbon sinks, too. The same analysis found that the amount of cropland whose soils can store carbon declined nearly 7% between 1990 and 2013. The amount of land given over to human settlements rose more than 30% during that period.

Fortunately, repairs to some of these systems already have begun. In fact, we have a functioning "restoration economy" in the United States that supports 126,000 direct jobs and contributes $25 billion annually to the overall U.S. economy. Its workforce is larger than coal mining, logging or steel production.

At present, the restoration economy is driven largely by environmental regulations. But the economic and social benefits of many ecosystems are so significant that we should not need mandates to use them. Seattle is an example. It is one of many U.S. cities that are saving money by employing natural methods for controlling storm water. Those methods include more vegetation, green spaces and permeable surfaces that allow rain water to soak into the soil rather than becoming runoff that floods communities and pollutes rivers. "Environmental restoration is increasingly seen as a viable and sustainable way to avoid the costs of conventional infrastructure construction and maintenance," according to researchers from Yale, the University of North Carolina at Chapel Hill and Adam Davis, an ecosystems investment advisory service.

The current restoration economy includes projects both large and small. For example:

• Along Louisiana's coastline, where land the size of a football field is lost to the ocean nearly every hour, a coalition of environmental organizations and government agencies has been restoring land and working to protect the wetlands that help buffer seaside communities from storm surges. Saving the coastline reportedly is the fastest growing industry on that part of the Coast, supporting 32,000 jobs with salaries that average nearly $70,000 per year. The restoration labor force is larger than that for oil and gas production in the region.

• An initiative to restore and protect the Great Lakes ecosystem has been underway since 2010. It includes more than 2,000 projects designed in part to restore wildlife habitat and increase watershed acreage enrolled in agricultural conservation programs.

• On the upper Mississippi River, the first large river restoration project in the nation has been underway for nearly 30 years. Fives states, several government agencies and some of the nation's largest conservation and wildlife groups are involved. So far, the project has restored 105,000 acres of river and floodplain wildlife habitat; 35 more projects involving 87,000 acres of habitat are in the works.

• Several inland communities prone to flooding have put the meander back in rivers that were straightened in the past by channelization projects. Meanders are one of nature's ways of retarding flooding. One river restoration project is on the Kissimmee River in Florida, where the Corps of Engineers tried to control flooding in the 1960s by creating a 56-mile-long drainage canal and draining 31,000 acres of wetlands. The result was a substantial decline in fish, water birds and other wildlife. Since 1992 the Corps and local agencies have been restoring the natural contours of the river and more than 40 square miles of floodplain ecosystems including nearly 20,000 acres of wetlands.

• The U.S. Department of Agriculture operates a year-old program to help farmers, ranchers and forestland owners use technologies and management practices that reduce greenhouse gas emissions, increase carbon storage and produce renewable energy. The practices include tillage that minimizes soil disturbance and rotational grazing that allows pastures to rejuvenate. USDA's objective with the program is to reduce carbon emissions and improve sequestration by more than 120 million metric tons of carbon equivalent by 2025.

• American cities have lost more than 600 million trees to development over the last three decades, according to American Forests. Even so, urban trees are removing nearly 800,000 tons of air pollution from the atmosphere every year. The U.S. Forest Service estimated in 2010 that there were nearly 4 billion trees in urban areas with a value of $2.4 trillion. Cities can also use green spaces, green roofs, exposed soils and lawns also store carbon. In fact, researchers at the Forest Service reported in 2013 that urban soils stored three times more carbon than urban trees.

It's not hard to imagine a nationwide campaign to replant forests, restore wetlands, bring more nature back to cities, and promote carbon-capturing tillage and grazing practices. A wide variety of organizations could be involved: AmericCorps and FEMA Corps, the Boy and Girl Scouts, Lions Clubs, 4-H Clubs, American Forests, the National Association of Floodplain Managers, the National Wildlife Federation, the Nature Conservancy and the many state and federal agencies with responsibilities related to ecosystem restoration, among them the U.S. Army Corps of Engineers, the National Forest Service, the Agriculture and Interior Departments, the Environmental Protection Agency, the U.S. Geologic Survey, the National Oceanic and Atmospheric Administration and even NASA.

For their part, the next Administration and Congress could help with several relatively minor modifications to federal policies and programs. The NGO Forest Trends and the Nicholas Institute at Duke University have just issued a report that identifies several of these policy adjustments.

Michael Jenkins, the CEO of Forest Trends, says, "we have enough information to act now." We also have a promising subset of the U.S. economy that can become an even greater job-creator; the potential for a national program that bridges the political divide; and a wide array of valuable services that can be recaptured by returning ecosystems to full employment. But if we want natural carbon sinks to help us avoid catastrophic climate change, then the one thing we do not have is a lot of time.