The 10 hottest years on record have occurred since 1998, and this year is on track to be hotter than all of them. As heat rises, so does the number of people trying to cool down homes, schools, hospitals and businesses. This isn't just about comfort; it's a matter of public health. A blistering heat wave in India killed more than 2,300 people this summer. Yet too often, the air conditioners we use to cool down also contribute to climate change--the very force that's fueling extreme heat.

Fortunately relief could be on the horizon.

This week, the world's nations are gathering in Dubai to reach an agreement that would start phasing out hydrofluorocarbons (HFCs)--a class of chemicals used in air conditioning. HFCs are known as "super greenhouse gases" because they have thousand times more global warming potential than carbon dioxide. Safer alternatives exist that can help people stay cool and fight climate change at the same time.

It's too soon to say exactly what this week's meeting will deliver, but a new agreement could unleash those alternatives. It would also provide an example of successful international cooperation as we head into the Paris climate talks this month. 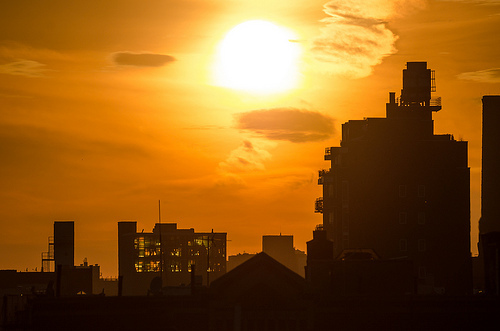 Indeed, HFC reductions are part of one of the most effective international environmental agreements of all time: the Montreal Protocol.

The global community adopted the protocol in 1987 to preserve the ozone layer. Chlorofluorocarbons (CFCs) were eating away at this protective layer, exposing people to higher risk of skin cancer, cataracts, and other illnesses. The protocol eliminated the use of CFCs, and since then, the ozone layer has started to restore its capacity to shield us from disease. Just phasing out the U.S. portion of CFCs alone will prevent nearly 300 million cases of non-melanoma skin cancer in America.

HFCs were invented to replace CFCs, but now the international community recognizes these chemicals fuel climate change. And left unchecked, HFCs will continue to skyrocket. In rapidly developing countries, living standards are rising and more people can cool down their homes and cars. China's market for air conditioning doubled over the last five years. And fifteen years from now, India's market for home air conditioning units is expected to grow 30-fold.

Safer chemicals and more energy efficient technologies can provide cooling without severe climate implications. Shifting to these alternatives could avoid the equivalent of 12 times the current annual carbon pollution of the United States by 2050.

Leaders from more than 100 nations have called for amending the protocol to phase-down HFCs, including Chinese President Xi and U.S. President Obama. Heading into this week's final negotiation in Dubai, consensus has built around several elements--elements that serve as a model for other international agreements.

First and foremost, any HFC amendment to the Montreal Protocol needs to address the issue of equity. This can be accomplished by calling on developed nations to meet stronger reduction targets first and giving developing nations more time to hit their targets.

This is powerful formula for international action: help all nations move into a sustainable future, set rigorous and achievable goals, and strengthen the bonds of global cooperation.

When scientists first sounded the alarm about ozone depletion 40 years ago, they were met with disbelief and indifference. Yet nations rose above their original apathy and succeeded in eliminating CFCs. Now we are poised to do the same for HFCs.

If or when adopted, this amendment will make a significant difference in our ability to manage the growing threat of climate change. It's an opportunity we must not miss, and that's why climate activists are focused on Dubai this week. If the global community can agree to reduce HFCs in Dubai, we should be able to do the same with carbon in Paris.