Today, myself and others knocked at the door of St. Patrick's Cathedral, but the door was not opened, rather it was slammed in our faces. As I begin to write this article, I'm cognizant of the raw emotions that I feel deep inside my heart. It's a feeling that I'm unfamiliar with, because until today, I have never been denied a seat at Christ's table. In fact, today marks the first day that I have ever felt disowned, abandoned, and lost.

Earlier today, a group of Catholics including myself gathered on the corner of East 46th Street and Fifth Avenue in Manhattan. We gathered for a simple purpose, to dirty our hands as we prepared to attend Mass at St. Patrick's Cathedral. We were soiling our hands as a silent response to Cardinal Dolan's column last week in which he suggested that LGBT people were welcome in the church so long as they washed their hands. As we began to rub our hands together with pieces of ash, our hands took on the look and feel of the effort that has defined our work to receive an equal seat at the table of Christ in the Catholic Church. Those participating were not only LGBT Catholics, but also allies and, perhaps most importantly, parents of LGBT children. We gathered not in protest, but as a silent witness.

It is what transpired in the moments after soiling our hands that I have trouble understanding and placing in the context of the Christian experience. At around 9:30am, the ten of us gathered were greeted by four police cars, eight uniformed officers, a police captain, and a detective from the Police Commissioner's LGBT liaison unit. The detective informed us that the Cathedral would prohibit us to enter because of our dirty hands. It was at that moment that I realized the power of fear. The Archdiocese of New York was responding out of fear to a peaceful and silent presence at Mass. Even in light of this, we decided that we would walk solemnly from our gathering spot to the Cathedral with hopes that we might be welcomed.

As we reached St. Patrick's Cathedral, we were approached by Kevin Donohue, who identified himself as being in charge of operations for the cathedral. Sadly, Mr. Donohue's tone was both cold and scolding. What astounded me most was when he said that we could enter the cathedral so long as we washed our hands first. Even now, writing those words I find myself struggling to understand their meaning, while coming to terms with their exclusionary nature.

It was at this moment that Mr. Donohue advised us that if we entered St. Patrick's Cathedral with dirty hands, we would be arrested and charged with criminal trespassing. Upon hearing those words, I remember standing there thinking, "How can I be charged with criminal trespassing in my own home?" It was then that I realized what it meant to be spiritually homeless. This realization was particularly difficult for me in light of the private meeting that I had with Cardinal Dolan on November 27, 2012, at his office in Manhattan. It was during that meeting that he expressed such love and welcome that I find his subsequent "conditional welcome" to be difficult to understand.

In response to the Archdiocese's threat of arrest, we opted to remain outside where we stood in silent vigil with our palms turned out facing toward the main doors of Cathedral. As the start of the Mass drew near, the temporary steel doors that mark the front of the Cathedral while the original doors are refurbished, seemed to be symbolically appropriate. The cold steel and the means by which the doors closed as we stood outside seem now to capture well the chill that we felt from the Cathedral's staff as well as the Cardinal. Our peaceful presence was responded to with a resounding "you are not welcome."

As someone who was reared Roman Catholic from the moment of birth, I have always known the Church and its community of believers to be a place of welcome and affirmation. When I came out as a gay man, my childhood priest and the leadership of my hometown parish stood beside and supported me. Today, this childhood experience of "church" stands in stark contrast to the cold and heartless response of the Archdiocese of New York and Cardinal Dolan to our presence at the Cathedral earlier today.

The other day, I posted on my Facebook page that in the wake of the Cardinal's recent false welcome, I stand at a crossroad in my faith journey; however, I realize now that it is not I who stands at this crossroad, but rather the Cardinal himself. He stands at point at which he can choose to see the inherent dignity present in all people or to follow a path laid with judgment and accusation.

Today, I don't stand at a crossroad, but rather I find myself standing at the threshold of a door. I and others are standing at the doorway to the Church knocking, seeking, and asking. By this action, I hope that the doors of the Cathedral will be opened to us not on a conditional basis, but rather with the understanding that we are all created in the image and likeness of God.

This morning's vigil was not about dirty hands, but rather in the words of Brendan Fay it was about, "clean hearts." With our clean hearts and dirty hands, we will continue to knock at the door of the Cathedral with hopes that one day, Cardinal Dolan might finally realize that we too are worthy to enter the church as children of God.

Note: Although Cardinal Dolan was not present at the Mass at St. Patrick's Cathedral, as some may conclude based on the title, the title is intended to draw reference to the fact that the Cathedral is the seat of the Archbishop, Cardinal Timothy Dolan. With that in mind, he is the leader of the Cathedral; therefore, he would be aware of the policies pertaining to access to the Cathedral and ultimately responsible for how those policies are implemented and/or revised. 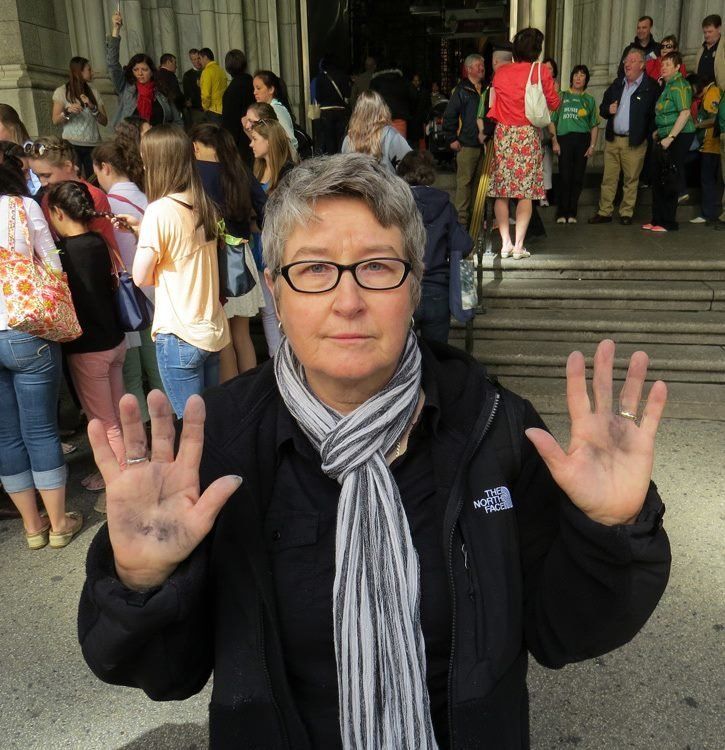