Cardinal Dolan, I write to you as the director of the Ali Forney Center, the nation's largest organization dedicated to homeless LGBT youth. I am writing to you on behalf of the hundreds of thousands of LGBT youths who have been driven from their homes by parents unwilling or unable to accept their own children because they are gay. And I write to you as a member of the Archdiocese of New York who is deeply ashamed by the ways that his bishop contributes to the abuse and harm suffered by these youths.

I want you to understand how you, and other religious leaders who fight against the acceptance of LGBT people, are helping to create a national tragedy. As youths find the courage and integrity to be honest about who they are at younger ages, hundreds of thousands are being turned out of their homes and forced to survive alone on the streets by parents who cannot accept having a gay child. Parental rejection has become so prevalent that LGBT youths make up an astonishing 40 percent of the nation's homeless youth population.

Do you know that a recent study of family rejection found that parents who identify themselves as "strongly religious" are much more likely to reject their LGBT children?

Certainly you must see your responsibility in fostering a climate where parents turn on their own children, for you have been a loud and strident voice against the acceptance of LGBT people as equal members of our society. When you compare being gay to being an alcoholic, as you did in interviews with the local media, you cause parents who give credence to you to see their LGBT children in terms of sickness and addiction. When you equate the state of New York with Communist China for granting its LGBT citizens marriage equality, you make the acceptance of LGBT people seem menacing and evil. You recently wrote to President Obama threatening "a national conflict between church and state of enormous proportions" because of the Obama administration's decision not to support a federal ban on gay marriage. I hope that you understand that thousands of LGBT teens will be wounded in this conflict you have decided to escalate.

When you use your position as a religious leader to fight the acceptance of LGBT persons as equal members of our society, you inevitably make many parents less able to accept their own LGBT children.

I ask you to consider the enormous human suffering caused by parental rejection. The number of LGBT youths left in abject destitution and homelessness after being driven from their homes is estimated by the federal government to be between 120,000 and 240,000. Many of these youths have no way to support themselves except through prostitution. In New York City 20 percent of the homeless LGBT youth become infected with HIV. Youths who are rejected by their families suffer from elevated rates of depression and other mental illness; they are much more likely to abuse substances. Most alarmingly, LGBT youths who are rejected by their families are eight and a half times more likely to be suicidal than those whose families accept them. 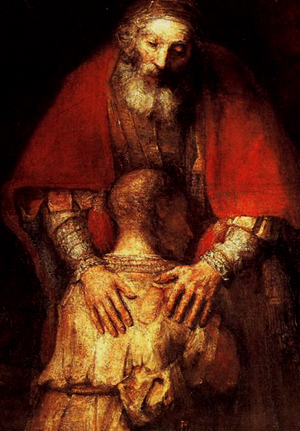 I also ask that you consider how in fighting against the acceptance of LGBT people, you are encouraging behavior that grossly contradicts the core message of Jesus Christ in the Gospels, whether you intend to or not. Is it not at the very heart of Christ's message that God's love for us is the steadfast, unfailing, merciful love of a parent? I could point to numerous examples of this message in the Gospels, but I ask you to especially reflect on the parable of the Return of the Prodigal Son and its image of God as a tender, loving father so consumed with all-accepting, all-forgiving love for his child. Surely you must recognize the shamefulness of so many Christian parents discarding their LGBT children. What a grotesque perversion of the Gospel message you perpetrate when you fight against the acceptance of LGBT people, and in so doing foster this depraved climate where parents turn on their own children.

We have looked with horror at the spectacle of numerous bishops having enabled the abuse of thousands of children by failing to remove sexual predators from the ranks of the priesthood. As people come to better understand your role in the terrible suffering caused by homophobic parents turning on their children, you and other religious leaders who aggressively fight the acceptance of LGBT people will similarly be seen as demonstrating a reckless indifference to the welfare of children.

Cardinal Dolan, I pray that you might be able to open your eyes and your heart to the cruel suffering LGBT youths endure when their parents reject them. I invite you to visit the Ali Forney Center, only 30 blocks from St. Patrick's Cathedral, and meet with youths whose Catholic parents drove them from their homes. I want you to hear them tell you what it is like to have their parents be ashamed of them, and tell them that they are against God. I want you to see what their lives are like alone, unloved, and abandoned in the streets. I hope that by meeting our kids you can understand the pain and anguish you help to cause.

Decent people protect children from harm. I want you to be that decent person. I hope decent Christians will join me in demanding that religious leaders stop promoting homophobia. As the Cardinal Archbishop of New York, and as the President of the U.S. Conference of Catholic Bishops, you may well be the most influential religious leader in the country, and could make an enormous difference in this crisis of family rejection. I hope and pray that you can stop fighting the acceptance of LGBT people as equal citizens. I want you to understand how LGBT youth suffer because of such a fight. Please see these rejected children through the eyes of a pastor and figure out a way to stop causing them to be harmed.

Carl Siciliano is the founder and executive director of the Ali Forney Center, which provides housing, medical care, and vocational and educational support to LGBT youths who have been driven from their homes. Formerly he was a Benedictine monk and a member of the Catholic Worker movement.