VATICAN CITY (RNS) The controversy over Cardinal Roger Mahony's vote in the conclave that will elect a new pope has now reached the Vatican, with at least one cardinal musing aloud that the former archbishop of Los Angeles should consider staying home.

Mahony, who led the nation's largest archdiocese from 1985 to 2011, has been accused of hiding sexual abuse by priests and was recently sidelined by current Archbishop Jose Gomez.

Gomez announced that Mahony would no longer have any "administrative or public duties" after a court-ordered release of 14,000 pages of internal church records showed Mahony and others actively tried to shield abusive priests from prosecution. Gomez called the records "brutal and painful reading."

Nonetheless, the 76-year old cardinal remains a bishop" in good standing" and retains the right to vote for the future pope until he reaches age 80. Gomez has since said he supports Mahony's vote in the conclave.

The magazine also asked its readers to share their thoughts on whether Mahony should attend the conclave. Within hours, the magazine received hundreds of answers via its website, overwhelmingly asking the cardinal not to come to Rome.

"Cardinal Mahony should not only stay home from the conclave but retire to a life of prayer in a monastery," read one typical comment. "It seems inconceivable to me that he doesn't feel the moral duty to abstain from the conclave," read another.

By Tuesday, Mahony's case was on the front page of most of the main Italian newspapers, prompting the first reactions from within the Vatican.

In an interview with the daily La Repubblica, Cardinal Velasio De Paolis, the former head of the Vatican's Prefecture for Economic Affairs and the pope's envoy charged with reforming the disgraced Legionaries of Christ, said that "it will be up to (Mahony's) conscience to decide whether to take part or not."

De Paolis stressed that there is no formal procedure to stop Mahony from attending the conclave.

"The common practice is to use persuasion. There is no more that can be done. Cardinal Mahony has the right and duty to take part," he said. "This is a troubling situation but the rules must be followed."

According to De Paolis, only "someone with great authority" could advise "through a private intervention" that the retired Mahony not take part.

On Tuesday, the Italian news agency ANSA quoted Bishop Gianfranco Girotti, a former No. 3 official at the Congregation for the Doctrine of the Faith under then-Cardinal Joseph Ratzinger, as saying that "if his presence creates difficulties or embarrassment, then I think it could be opportune to renounce."

"But the decision is up to him and his conscience," Girotti added.

La Caramella Buona, an Italian group for victims of sexual abuse, also called on Mahony not to attend the conclave.

But in a Monday tweet, Mahony signaled his resolve to come to Rome. "Count-down to the Papal Conclave has begun. Your prayers needed that we elect the best Pope for today and tomorrow's Church," Mahony wrote.

The tweet sparked dozens of reactions online, with Twitter users calling his decision "shameful." "Please recuse yourself for the good of the Church," asked @bobshineproblem.

In a Monday post on his blog, Mahony also discussed the difficulty of "never rationalizing what is happening in our lives, never protesting misunderstandings, and never getting angry because of false accusations."

PHOTO GALLERY
US Cardinals Who Will Select Pope 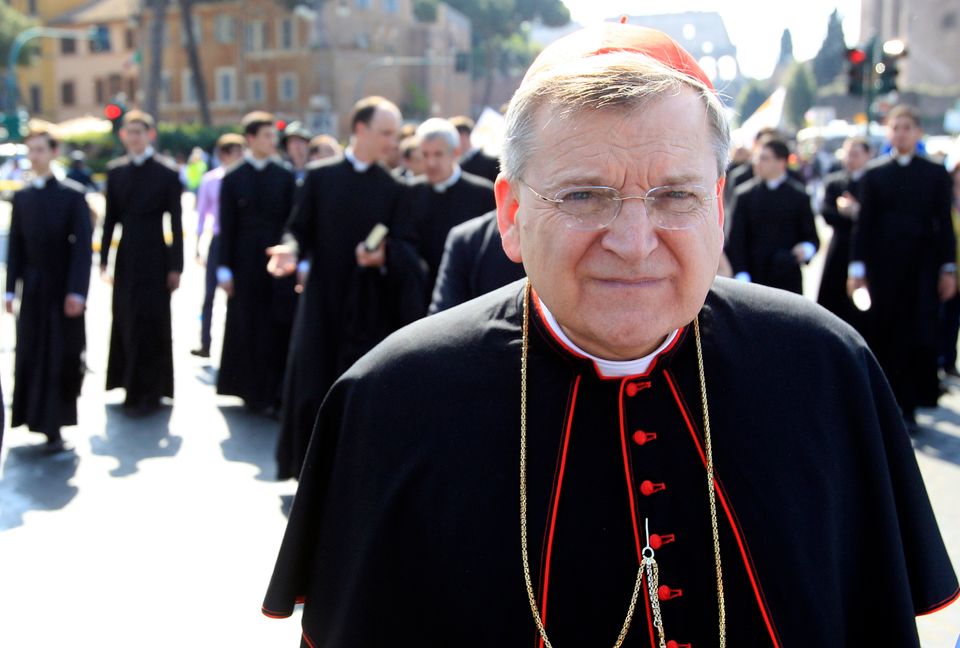 1 / 11
Raymond L. Burke
Prefect of the Supreme Tribunal of the Apostolic Signatura Age: 64 Born: June 30, 1948 in Richland Center, Wis. Education: Catholic University of America (Washington, D.C.), Pontifical Gregorian University (Rome) Ordained a priest: 1975 in Rome Posts held: bishop of La Crosse, Wis. (1994-2003); archbishop of St. Louis, Mo. (2004-2008); prefect of the Apostolic Signatura (2008-present) Elevated to cardinal: 2010 by Pope Benedict XVI FILE - This May 13, 2012 file photo shows Cardinal Raymond Leo Burke, of the United States, taking part in an anti-abortion march in Rome. The resignation of Pope Benedict XVI on Feb. 28, 2013 opens the door to a host of possible successors, from the cardinal of Milan to a contender from Ghana and several Latin Americans. Top candidates for Benedict's succession from the U.S. include Cardinal Timothy Dolan of New York and Cardinal Raymond Burke, an arch-conservative and the Vatican's top judge. (AP Photo/Riccardo De Luca, files)
AP