ST. LOUIS (AP) — The Cardinals rushed to the plate to congratulate Allen Craig. The Red Sox stormed home to argue with the umpires.

The fans, well, they seemed too startled to know what to do. Who'd ever seen an obstruction call to end a World Series game?

In perhaps the wildest finish imaginable, the rare ruling against third baseman Will Middlebrooks allowed Craig to score with two outs in the bottom of the ninth inning and lifted St. Louis over Boston 5-4 Saturday night for a 2-1 edge.

So was most everyone at Busch Stadium after the mad-cap play.

After an umpire's call was the crux of Game 1 and a poor Boston throw to third base decided Game 2, the key play on this night combined both elements.

Molina singled with one out in the ninth off losing pitcher Brandon Workman. Craig, just back from a sprained foot, pinch-hit and lined Koji Uehara's first pitch into left field for a double that put runners on second and third.

With the infield in, Jon Jay hit a grounder to diving second baseman Dustin Pedroia. He made a sensational stab and threw home to catcher Jarrod Saltalamacchia, who tagged out the sliding Molina.

But then Saltalamacchia threw wide of third trying to get Craig. The ball glanced off Middlebrooks' glove and Craig's body, caroming into foul territory down the line.

After the ball got by, Middlebrooks, lying on his stomach, raised both legs and tripped Craig, slowing him down as he tried to take off for home.

"I just know I have to dive for that ball. I'm on the ground. There's nowhere for me to go," Middlebrooks said.

"With the defensive player on the ground, without intent or intent, it's still obstruction," Joyce said. "You'd probably have to ask Middlebrooks that one, if he could have done anything. But that's not in our determination."

"He was in my way. I couldn't tell you if he tried to trip me or not. I was just trying to get over him," he said.

Left fielder Daniel Nava retrieved the ball and made a strong throw home, where Saltalamacchia tagged a sliding Craig in time. But plate umpire Dana DeMuth signaled safe and then pointed to third, making clear the obstruction had been called.

"I was excited at first because we nailed the guy at home. I wasn't sure why he was called safe," Middlebrooks said.

"We're all running to home to see why he was called safe. We didn't think there was any obstruction there, obviously. As I'm getting up, he trips over me. I don't know what else to say."

Said Cardinals slugger Matt Holliday: "You hate for it to end on a somewhat controversial play."

"You would like for it to end a little cleaner, but that's part of it," he said.

A neat coincidence, though: In 2004, umpire Paul Emmel called obstruction on Seattle shortstop Jose Lopez, ruling he blocked Carl Crawford's sightline and giving Tampa Bay the game-ending run. Emmel was the first base umpire on this night, too.

The umpires all agreed Joyce got it right. Until now, he was best known for making an admittedly wrong call in 2010 that denied Detroit's Armando Galarraga a perfect game.

Game 4 is Sunday night, with Clay Buchholz starting for Boston against Lance Lynn.

To some Cardinals fans, the call meant long overdue payback. They're still smarting from Don Denkinger's missed call that helped cost them the 1985 World Series.

To some Red Sox fans, the tangle might've brought back painful memories from the 1975 World Series. In Game 3, Cincinnati's Ed Armbrister wasn't called for interference by plate umpire Larry Barnett when he blocked Boston catcher Carlton Fisk on a 10th-inning bunt. Fisk made a wild throw, setting up Joe Morgan's winning single.

Craig returned for this Series from a sprained left foot that had sidelined him since early September. After an awkward slide on the final play, he hobbled off the field in apparent discomfort.

The Red Sox scored twice in the eighth to tie it 4-all. Jacoby Ellsbury led off with a single and Shane Victorino was hit by a pitch for the sixth time this postseason. Both runners moved up on Pedroia's groundout, and David Ortiz was intentionally walked.

Cardinals manager Mike Matheny went to hard-throwing closer Trevor Rosenthal with the bases loaded, hoping for a five-out save from a rookie who has looked almost untouchable this October. But the Red Sox pushed two runs across.

Nava drove in one with a short-hop grounder that was smothered by second baseman Kolten Wong, who had just entered on defense in a double-switch.

Wong went to second for the forceout, but Nava beat the relay and Ellsbury scored to make it 4-3. Xander Bogaerts tied it when he chopped a single up the middle.

Workman jammed Holliday and retired the slugger on a routine fly with two on to end the bottom of the eighth. That sent the game to the ninth tied at 4. Rosenthal wound up with the win.

Holliday's two-run double put the Cardinals on top 4-2 in the seventh.

It was a tough inning for Red Sox reliever Craig Breslow. Matt Carpenter reached safely when he checked his swing on an infield single to shortstop. Carlos Beltran was grazed on the elbow pad by a pitch — making no effort to get out of the way.

Beltran, in fact, almost appeared to stick his elbow out just a tiny bit to make sure the ball made contact.

Junichi Tazawa came on and Holliday pulled a grounder past Middlebrooks at third. The ball kicked into the left-field corner and Holliday went all the way to third on the throw to the plate.

Tazawa then got a couple of strikeouts and prevented further damage.

It was Middlebrooks' first inning in the field. He entered as a pinch-hitter in the top of the seventh and took over at third base in the bottom half.

That shifted Bogaerts to shortstop — and neither one was able to make the difficult defensive play Boston needed in that inning.

Cardinals starter Joe Kelly, one of the few major league pitchers to wear glasses on the mound, set down his first nine batters. The Red Sox seemed to see him better the next time around in coming back from a 2-0 deficit.

Bogaerts opened the fifth with a triple that banged-up right fielder Beltran couldn't quite reach. The rookie later scored on a grounder by pinch-hitter Mike Carp.

Slumping Shane Victorino drew a leadoff walk from Kelly in the sixth and wound up scoring the tying run. Ortiz grounded a single off lefty reliever Randy Choate, and Nava greeted Seth Maness with an RBI single that made it 2-all.

Their fielding woes from Game 1 far behind them, the slick-fielding Cardinals made several sharp plays. Kelly barehanded a one-hopper, Carpenter threw out a runner from his knees up the middle and third baseman David Freese backhanded a line drive.

St. Louis quickly broke ahead, scoring in the first inning for the first time this October on RBI singles by Holliday and Molina. After the Cardinals got three hits in a span of four pitches, Red Sox reliever Felix Doubront began heating up in a hurry before Jake Peavy settled down.

NOTES: With no DH, Red Sox slugger Mike Napoli was on the bench. Workman batted in the ninth and struck out; Farrell said he needed another inning from the reliever. ... Cardinals Hall of Famers Bob Gibson, Lou Brock, Ozzie Smith and Red Schoendienst took part in the first-ball festivities, with fan favorite Willie McGee tossing the pitch. ... At 21, Bogaerts became the third-youngest player to hit a triple in a World Series. Ty Cobb and Mickey Mantle did it at 20. ... Molina has a six-game hitting streak in World Series play. ... The family of late umpire Wally Bell was in the stands. Bell died at 48 this month, and the six-man crew is wearing patches to honor him. Bell's first plate job in the World Series was at this ballpark in 2006. 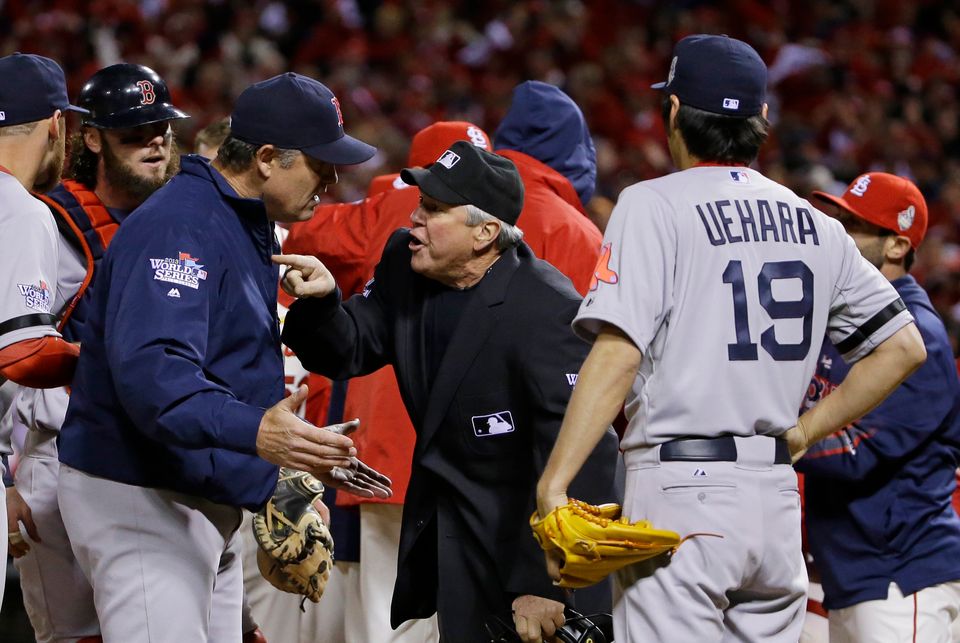