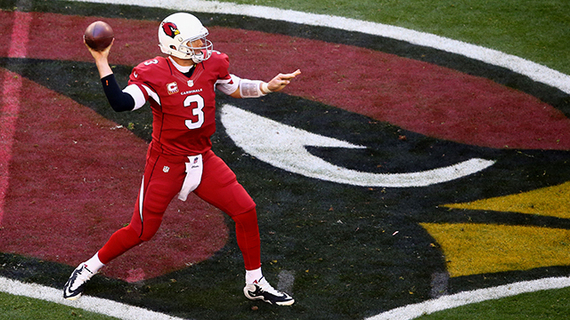 It's official, the Arizona Cardinals are in the playoffs after earning a narrow victory at home against the Minnesota Vikings with a final score of 23-20. Even though Teddy Bridgewater arguably had his best game of this season, it would be the coaching staff who'd drop the ball on the game, ultimately ending up with a loss for the team.

During the final drive, with 13 seconds left on the game clock, the Vikings decided to go with a pass play as opposed to just kicking the field goal to tie and go to overtime. What happened next was every coach's worst nightmare: Dwight Freeney broke away and sacked Bridgewater, resulting in a stripped ball and fumble that the Cardinals recovered, effectively ending the tight matchup.

Carson Palmer was in full form, in what is easily one of the best seasons of his illustrious career, one that has seem him under center on several NFL teams. He put up 310 yards and two very long and impressive touchdown passes, relying ultimately on his defense to help put the game away late in the fourth quarter.

Early in the game, the Cardinals saw a long drive run out of steam after officials ruled that David Johnson was short of the end zone - leading to the first scoring points of the game: a field goal.

Eager to answer back, the Vikings put forth a mixed-play drive, resulting in Adrian Peterson scoring his 100 career touchdown to put the score at 7-3.

But the Cardinals were not to be outdone. Palmer zipped one to John Brown after seeing some room in the coverage. Brown would take that potato toss 65 yards to score, putting the Red Birds back in the lead at 10-7.

Some back and forth followed until near the end of the first half, when Teddy Bridgewater, who was 11 of 14 for 162 yards, helped his team get into field goal range, with Blair Walsh tying the game at 10-10 before the half.

An early third quarter fumble by Peterson was capitalized on by the Cardinals, giving them a head of steam as Palmer connected with Michael Floyd for a 42-yard touchdown pass, putting the Cardinals up 17-10.

The Cards would stop the Vikings on their next drive and work their way into field goal range to increase the lead to 20-10 by the end of the third quarter.

The Vikings were not to be outdone, however. They fought hard and drove the ball back up the field, cashing in on a 54-yard field goal to reduce the lead to 20-13.

Following a failed Cardinals drive, Bridgewater would complete 4 of 6 passes, racking up 78 yards before finding Mike Wallace for the go-ahead touchdown, tying the score at 20 apiece.

But Palmer wasn't done just yet. He helped the cards get back into scoring range, where Chandler Catanzaro was able to put one through the uprights to take the lead at 23-20.

During the final drive, Bridgewater had four great connections on passes, effectively working his team into field goal range. But with 13 seconds on the clock remaining, the coaching staff decided to pass the ball instead of kicking the game-tying field goal. The result was that Dwight Freeney sacked Bridgewater and stripped the ball with Campbell falling on it and ending the match.

Notably, it's only the second time the Cardinals have had 11 wins in a regular season, tying a franchise record. Carson Palmer set the new franchise passing touchdown record with 31 on the season and counting, topping the previous record which was held by Kurt Warner.

With a playoff berth secured, the team can now focus on earning a first round bye and home field advantage.