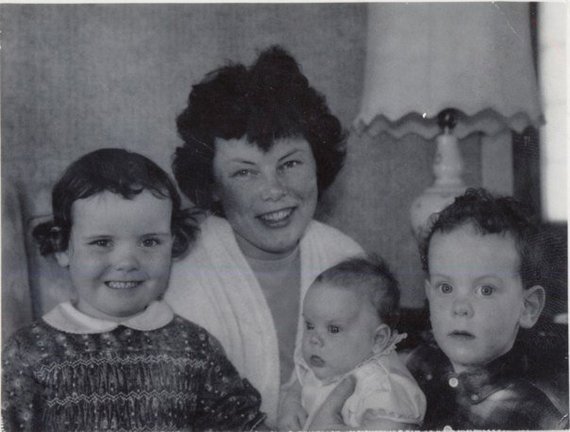 When I was a kid in the fifties and sixties, most of our mothers were at home. They were in charge of all things domestic - shopping, cooking, cleaning, laundry, and anything kid related. Kids these days grow up with working mothers more often than not. According to 2014 data from the Bureau of Labor Statistics, 70.1% of women with children under 18 were in the workforce. Of course, many of those working women are still the primary household manager, but mostly getting more help from their partners than they did in my mother's day.

Mum was a homemaker throughout my childhood and high school years. She'd started college before she married, but left without finishing in order to join my Dad at his Army post in Seattle during the Korean War. In the picture above, she's happily nestled with my siblings and me. But she was always restless and filled the time she wasn't homemaking with projects and volunteerism.

She remained at home as a full time homemaker until I started college in 1974. Determined to earn a college degree before any of her children did, she enrolled in Boston University and earned a BA in Education in 1977, the year before I earned my BA . She went on to work as a special education teacher until she retired.

Although she wasn't a working woman for most of her life, her approach to life taught me a lot about how to be successful in work (and life). Although she mightn't have thought I was always paying attention, I was.

Here are a few of the work and life lessons my mother taught me:

You can learn to do anything you want to do. My mother believed she could do anything she applied herself to. She built furniture, sewed wedding gowns (and repaired them for last minute panicked brides), made seat belts for our cars long before the government mandated them, trained dogs, cooked haute cuisine, wired lamps, made costumes for local theater companies, volunteered, went back to college in her 40′s and pursued all of her interests with passionate focus. I never saw my mother hesitate to try something new. I've often thought about that when faced with new opportunities that seem daunting.

Fight your fears - and your own battles. Mum stood up for herself and for us kids. She showed us the power of appearing brave, even when you didn't feel that way. She once saved our home in Newfoundland during a raging forest fire. The firefighters had told her the house needed to be abandoned to the fire, and they moved on to more salvageable properties. My mother stood on the roof and doused the house and yard with water from our well until the fire had passed. I learned that "fake it till you make it" can be a pretty good strategy.

Look out for other people, particularly the underdogs. She was all about treating people with kindness and respect - and that's what people remember her for.

Believe in the possibility that things will get better. Although she had tough times as a child and as an adult, I never saw her give up. She was always convinced that there was a path to a better outcome. She believed that optimism is a mighty shield when things get tough. She was right.

Morals aren't situational. Though not conventionally religious, she was always clear on the dividing line between right and wrong. She taught us to do the right thing, even when it was hard.

My mother died in 2010, but I take those lessons to work everyday. The things that have sustained me through my toughest times at work weren't learned during my MBA program. They were from a teacher who never fully appreciated her impact.