This week, I got an email from Nordstrom. The subject line read "Career-Ready Style Starting at $68." The price caught my eye, so I opened the email. I found myself staring at a photo of three young women who, but for their stylish attire and a couple of random accessories like eye glasses and a notebook, appeared completely stunned to find themselves in an office. Their clothes may have said business, but their body language and expressions said, "When's snack and nap time?" 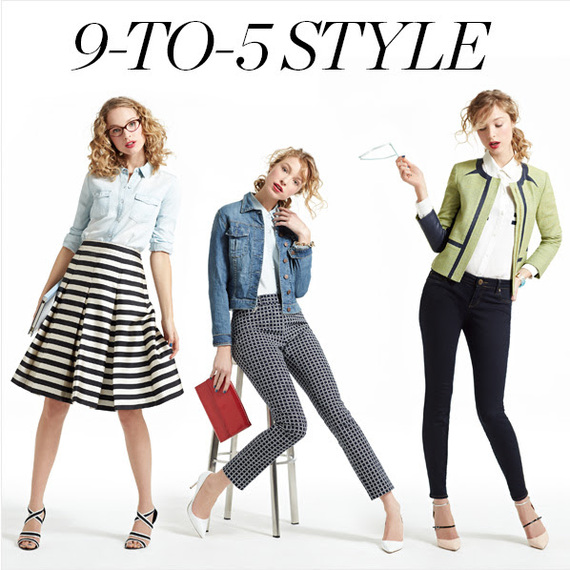 Sure, their clothes are adorbs, but rather than appearing "career ready," these models are posed in a fashion that makes them look dim-witted and daft. Unless I'm the casting director for Clueless II or Dumb and Dumber, the Sequel, I would never hire young women who present themselves like this. They're not doing anything at all, and yet they still appear to be in way over their heads.

I might expect this sort of depiction of women in a photo accompanying a story in Penthouse Forum targeting guys with office sexcapade fantasies. But this wasn't a photo aimed at appealing to "Mad Men"-era males with a perverted notion of women's usefulness and role in the workplace. This was an ad that was supposed to appeal to professional women in 2014. This ad was supposed to make someone like me want to buy clothes from a particular store--and that store was Nordstrom, not Boston Proper or Bebe.

Come on, Nordstrom. When advertising career attire for young professional women, don't insult women everywhere by making your models appear to have difficulty staying focused or stringing sentences together. Give us images of young women who look competent, confident and ready to get sh*t done. In other words, show us women who resemble how we ourselves hope to come across when we're at work.

But if you insist on sticking with your current approach, at least be consistent. Make sure that your "career ready" ads for young men are equally offensive and stereotypical. Use photos of sharply dressed young men posed in ways that make them look ridiculous. How about one with a couple of young men huddled around a laptop, scratching their heads and looking befuddled while searching for the "on" button? Or maybe a photo of a guy in business casual staring out the window longingly at a sports car in the parking lot while everyone else is focused on a presentation? Or perhaps a man in shirtsleeves with a thought bubble over his head showing he's imagining himself as a star football player while the charts and reports covering his desk show stock prices in free fall?

If insulting potential customers is a deliberate part of your marketing strategy, don't half step it. Go big or go home. While two fashion wrongs won't make a right, you can at least succeed in being an equal opportunity offender.