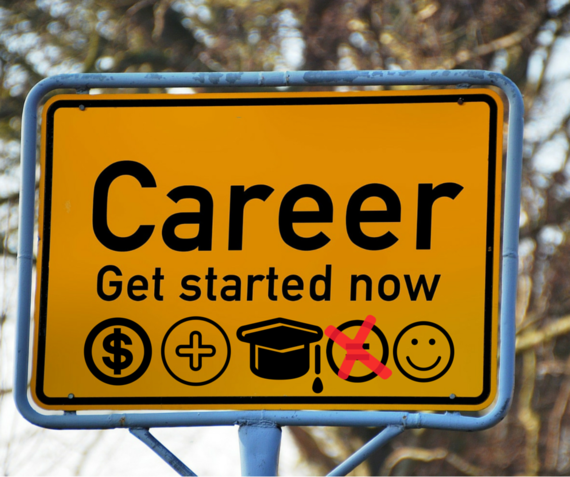 How should we measure career success? Happiness? Wealth? Work/life balance? Being able to contribute to society? Loving what you do for a living?

A recent report by the Georgetown University Center on Education and the Workforce says career success is based primarily on earning potential. The research showed that while the more secure, non-manual-labor jobs are going to those with bachelor's degrees, the best--and most lucrative--careers most often go to college graduates who major in fields that include engineering and pharmaceutical sciences, rather than concentrations that encourage public service, such as social work and education. The study found that African Americans, in particular, are at a disadvantage because they often major in these lesser paying fields. Its authors went on to say that colleges should be encouraging African Americans to pursue careers that allow them to make the most money.

While the report's authors agreed that it is hard to criticize anyone who wants to serve the community, they concluded that these majors just don't pay in America.

As the president of a major college whose mission is partially "to serve the general community," I am troubled by the sentiment that colleges should be urging African Americans to pursue more lucrative careers, to the exclusion of all else. Similar to the Obama administration's college scorecard which ranks institutions of higher education by the financial success of its graduates, it seems to me that this does not paint the full picture.

Although it's certainly understandable that students may wish to pursue careers that they believe will maximize their lifetime earnings or future financial security, this should not be the sole, universal standard by which to choose a long term career path. To suggest that colleges should push students toward jobs based on earning potential alone is, at the very least, impractical. If students are not oriented toward math or science, they shouldn't be pushed into careers in finance or medicine, as they won't find fulfillment in the work and may become unemployed before long. A college's first priority is education. Our job is to impart values: of knowledge and mind-expansion; of right and wrong; of collaboration; of responsibility; of being an adult.

So what should students actually be seeking as they make career choices? When I advise students, I give them four major points to consider:

1) Pursue a career based on your personal interests. One who enjoys his or her work is much more likely to excel and advance and also, to find fulfillment;

2) Another critical factor is identifying your strengths, i.e. do something you're good at because that's a likely path to success;

3) Look at economic prospects of potential career paths. Research the expected salaries of careers under consideration and determine whether these will allow you to support the lifestyle you desire;

4) Factor in the ability to contribute to the community via a given career path, since most people derive great satisfaction from serving others.

Each individual student must decide for himself how to weigh the above four considerations and which will figure larger in his calculation as he chooses a career. There are fields that enable service to society and financial success to coexist, but clearly there are some that won't and hard choices will need to be made.

Where Does Income Inequality Fit in?

While income inequality is rampant in the U.S. and minorities are hard hit by this very real trend, college grads do not often fall into poverty or near poverty levels. In fact, most college graduates find themselves solidly in the middle class, as recent studies have shown that the difference in lifetime wages between a college graduate and a high school graduate is $1 million.

In Thomas Frank's "What's the Matter with Kansas?," the author notes that the voting habits of the state population of Kansas has shifted greatly in the last century, moving from staunchly liberal principles to those of conservatives. Frank opines that this transformation was a result of the Republican Party successfully, and illogically, convincing the people to vote on the basis of their social and cultural ideals, even though conservatives espoused policies that went against the people's mostly working-class economic interests.

Without addressing the validity of Frank's opinion about whose economic policy is better for middle-class voters, Frank makes the same mistake as Obama's scorecard and Carnevale's Georgetown study. When measuring success, it's not all about the money.

How do you define career success?