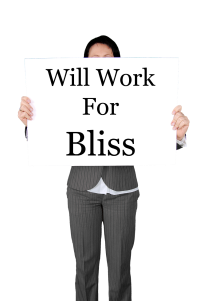 Like most millennials raised on the "world is your oyster" parental movement, I graduated college thinking that career would be one big party. Stepping off into not-so-adult adulthood with an empty bank account and a shoebox full of graduation cards, I might as well have tattooed Joseph Campbell's words on my heart:

"Follow your bliss and the world will open doors where there were only walls."

Naturally, starting my own life coaching business at 23 would be a fairy tale. I imagined my schedule book miraculously filling with "soul mate-like" clients and my PayPal retirement fund blossoming overnight. I had found my purpose, by golly -- my bliss -- which meant the success part should follow suit, right? Piece. Of. Cake.

Wrong. Love her as I may have, my business gave me no sympathy (and certainly no cake).

My lovely purpose gave zero hoots about: the post-recession economy, my student loans, my spells of inspiration drought, nor my waves of childlike ambiguity. Like a painfully quiet spectator, she watched with indifference as I could barely pay my bills. As I reached for the discounter shampoo in the toiletry aisle, my purpose couldn't even be bothered about my increasingly frizzy hair.

Nothing had ever felt so right and yet boy did I ever want to shake that Joseph Campbell like a prophetic rag doll. "I'm living my calling, Joseph... but where's the flippin' bliss?"

My purpose gave only the rudest of silence.

The Myth of Bliss
These days, I think bliss-following should probably come with a more accurate disclaimer:

Don't get me wrong. I'm still "Team Bliss'" biggest cheerleader, it's just that everyone left out the second half of the story. The part that tells us that bliss is like lusting after the most beautiful woman in the room who just so happens to be challenging and cruel and -- oh yeah, totally out of your league.

Because despite what all of those endearing graduation cards might have said, passion-chasing was not a foxtrot down a hall of open doors. If only I had known that following my bliss would force me to become exactly what I'm capable of...

Growing Pains
There's this assumption in many a self-help circle that if following your bliss is messy, then you must be doing something wrong. That when we are living the "right life" it should feel fantastic. And look like over-night success. And smell like fresh-cut roses on a Sunday afternoon (not "I haven't showered in two days because entrepreneurship is hard" smell). Some would even say that when we are living our authentic mission -- "the life we were born for" -- we should attract abundance and happiness and all kinds of karmic loveliness. My generation in particular is known for that sort of "stubborn optimism" that success will eventually find us.

It turns out I'm not entitled to a comfortable life. It turns out, bliss or not, the universe doesn't owe me riches or happiness (not even life! -- I learned, after an earth-shattering, near-death experience). The only thing I am entitled to is the opportunity to become the person I came here to be. And while that might sound like a pretty lame birthday present from life, I've come to see it as the most beautiful gift of all.

Maybe purposeful work is supposed to be tough. Maybe "hard" doesn't always mean you're on the wrong path, but is sometimes a sign you're on the best path. Maybe you don't just develop a career... maybe the greatest career will develop you. We're not just chasing job titles, salaries, or recognition, we are growing -- growing into the people capable of mastering our dreams. Into the truest, happiest, most brilliant version of ourselves. Into professionals: people who can sustain the prizes we crave and who can love themselves and love their work with their whole darn hearts. That stuff ain't pretty.

Career is Hard, Generation Y
I remember my 23-year-old self -- already defeated by career-building, reading HuffPost in her PJs at 3 p.m. on a Monday, contemplating the existential woes we millennials call "quarter-life crisis" -- and I wish that I could tell her a "career-knight in shining armor" isn't coming.

"Don't wait for your dream job to appear on Monster.com. Don't pray to be discovered by a publisher or validated by 'likes' or for the magic SEO Gods to deliver your golden opportunities. You will never have the perfect resume or bio. You will never be good enough or smart enough or ready enough to pick up the phone. It will never be the 'just right' time to quit the job or start the blog or go get your booty out there."

Because your purpose wants you to have your dreams, but only like the parent who lets you ride your bike solo before you think you're ready. Who doesn't always let you win. Who sometimes makes you wait your turn. Who knows that a little broken heart today will let you love even bigger tomorrow.

Because It's Worth It
Today, I love my career with every ounce of my being because it broke my heart (a million plus one times).

Hammering nail after nail into that foundation until the day those few lousy boards became a house. (Became a home. Became a village.)

Until the day my quiet spark became two. (Became three. Became a blaze.)

Yep, that must be the real miracle, Joseph Campbell. You were right all along: bliss hand-delivered me opportunity after opportunity -- to become my own hero.

So cue the panic attacks. Don't forget the rejection letters, sweaty palms, and the very worst of hair days. Just give me a real 21st century career, please: true and hard, but so very beautiful.