You'd have to be living under a rock not to know that suicide has become an urgent social problem, a true epidemic affecting all levels of society. Nov. 22 is International Survivors of Suicide Loss Day.

Suicide sucks. And all the propaganda about it being preventable, which it is, rubs salt in the wounds for us survivors who've lost a loved one. All the "what ifs" we entertained, had worked through or put to rest, about how we alone could've/should've saved this person's life, come flooding back with one resounding word: PREVENTABLE. 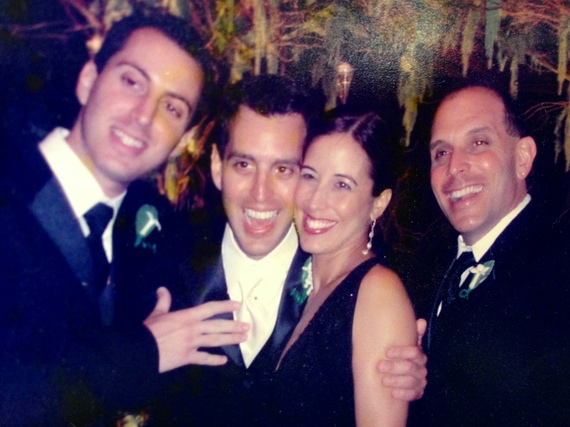 I lost my "baby" brother Adam in 2006. He was 26, confused about his future, and never reached out for help. He shot himself in the head a month after my own brain tumor surgery. At the time, the spotlight had been on me and my fragile state. Pregnant during the time of my operation, many people were convinced my baby and I wouldn't survive.

Distracted by this major event and life in general, we all seemed to miss the signs, and boy did he hide them well. His calm, cool demeanor -- his mask -- fooled us all. In hindsight, we realize that all along, Adam had been suffering quietly while gradually building up the courage to end his own life. The pain of living was greater than his fear of death. Unassumingly, his pain -- his life -- had become unbearable.

But we didn't perceive the storm that had been brewing inside him. Elusive and witty and so very likeable, Adam managed to maintain friendships and relationships for years without ever divulging anything personal about himself. Sure, he talked superficially about his likes and dislikes, this team and that place. And, he must've used his brain's entire storage capacity to memorize the lyrics to every rap song since the '90s. He shared his opinions about politics and pop culture. But, he never verbally expressed his vulnerabilities, his fears or his profound disappointments. Never. These cryptic messages were for his eyes only; they were etched into his skin with indelible ink and safely guarded under a guise of modesty or privacy -- his perpetual undershirt.

And when a relationship seems to be flowing well, and is void of strife and drama, we oftentimes equate that with "all's running smoothly." We now know that even those closest to us can elude us. Yes, we see them and interact with them daily. We share a dinner table, a bathroom, and live under the same roof with them. We may even, in fact, share a bed with them.

But let's face it: Every head is a world of its own. To really save someone from spiraling down into that endless abyss, and help prevent his or her death by suicide, we must be privy to their inner train of thoughts. And that's not easy to achieve with even the healthiest-minded individuals -- virtually impossible with those contemplating suicide.

Because as was the case with my Adam, many people not only don't want to share their most personal feelings due to a fear of rejection or shame, they simply cannot connect with their own disjointed and fragmented thoughts. Their minds are unwell and locked in the grips of mental illness. They're spinning out of control although they may appear to be in control on the outside.

Consequently, no amount of love, coddling, helicopter-ing or nagging will save a life. And this is something that has taken me years just to begin to understand. Admittedly, there is still a chorus of voices residing within me that insists that "Big sister Darah" could've at least done something after all.

But I continue to shush those voices and remind myself and others that he who is bent on ending his own life, on some level, must first re-gain a modicum of clarity in order "to be saved." In some small way, that person must be willing to open up just a little and let someone in. To make a gesture. Reach out. To ask for help.

Because those of us loved ones left behind are not clairvoyants and as is human nature, are beset with our own internal struggles. So although suicide is preventable, it is true, we survivors cannot hold ourselves liable for a loved one's suicide.

That line of thinking won't bring them back to life, but surely will bring on our own slow demise.

More:
healthy livinganxietydepressionsuicideStronger Together
Newsletter Sign Up
An essential daily guide to achieving the good life
Subscribe to our lifestyle email.
Successfully Subscribed!
Realness delivered to your inbox