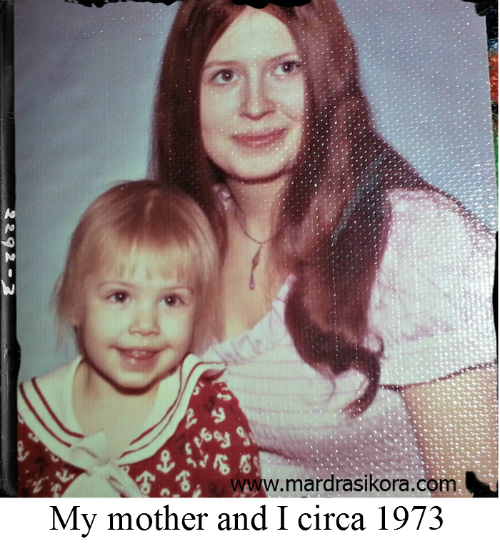 My mother is a character from a Tennessee Williams play... but without a Southern accent. I am her second child and was born when she was 16 years old. Her childhood was cut short and never spoken of in a way that imparted a sense of safety or innocence. Each man she ran away with she hoped would rescue her from the last. She gave up every child she bore to some degree. And in each tragedy she was the faultless victim, bearing the bruises without bearing the blame.

She's also hilarious. No matter how many times she repeated a joke, she could make it look like she just thought of it. As a bartender or waitress, she told countless anecdotes with ease and entertained like she was under a spotlight rather than serving up the daily special. She'd spontaneously break into song and dance. "I'm not a ham," she'd say, "A ham can be cured."

I believe my mother's highest ambition has always been to be liked. Hers has been a life of passing laughter and passing friends.

Last month, a doctor confirmed her Alzheimer's diagnosis, although it's been obvious for years now. She took a short written quiz, answered a few questions and told an anecdote or two, except now the same jokes came too close together. The doctor said "Alzheimer's," and my mom said, "What?"

"Yup, Mom, you're officially an Old-Timer."

"Oh." She paused. This is never good news, no matter how long you can remember. "Well, at least I still have my sense of humor."

"I'd rather you lose your memory," the doctor said, "Than your sense of humor."

"Well," she assured us, "At least I still have my sense of humor."

A few days earlier, my mom was quite upset because I was arranging for her to stay in a nursing home for a short time while her husband recovered from a particularly rough time with pneumonia. They would be separated and she relies heavily upon him. She relies upon his presence. She was scared. She was sad.

"Is this my fault?" she asked.

Which felt like a lie. My mother is only 60 years old. She has been smoking and drinking, excessively, for over 40 years. She has survived throat cancer and barely survived the chemotherapy and radiation to cure it. Does she know now? Is it possible that she concedes her decisions, her mistakes, her choices have contributed to this state her body and mind are in?

No. She cannot. She could not ever face that reality before and she will not face it now. Instead, she talks of a past that is sprinkled with fiction. She repeatedly asks about tomorrow or what is next because she has lost control of time.

And more than all of that, no one really knows what is a consequence and what is luck. Today this quote has come across my path in three different ways: "Do the best you can until you know better. Then when you know better, do better." -- Maya Angelou

My mother has always done her best.

That I do believe. However, she never did better because instead of facing the pain, she drowned it, and in doing so she could never take on the lesson. She couldn't learn to be better. To have better. At 60 years old, she should still have the chance to do better. But that chance has passed.

Then there's the genetics. Her father had Alzheimer's and he died only two years ago. Her lifestyle, compounded by cancer and its cure, may have flipped whatever genetic switch there is to be had on this issue, but who can know?

As for me, the fact that I gave birth to a child with Down syndrome when I was only 19 is a sign that I am prone to developing Alzheimer's as well. My son's triplicate 21st chromosome means that he has a 50% chance of displaying the memory problems associated with Alzheimer's before he is 50 years old. So where does that leave us? On a journey to beat the odds. To break this cycle and hold onto, well, ourselves.

"The future is called 'perhaps,' which is the only possible thing to call the future. And the important thing is not to allow that to scare you." -- Tennessee Williams