He's waiting for my call.

I can see him, crouched over on his bed, trying to rouse himself out of his stupor; hoping a call from me will do the trick, maybe give him some reason to wake up.

I don't want to call.

He had his home health aide there earlier but he slept through her entire shift, and now he's woken up alone. The table is covered with medications of all colors and sizes. The room is littered with books and papers and boxes of clutter. Ash from the cigarettes he shouldn't be smoking dusts the room.

Getting from the bed to the bathroom is a dangerous escapade with his weakened legs and broken body. Through heavily medicated eyes, he considers his path. It is all so overwhelming, he allows himself the pleasure of closing them. Sleep is a beautiful thing.

By the time he opens them again, it is over 20 minutes later, but he doesn't feel the passage of time. He generally doesn't feel anything but, of course, the pain. And a nagging urge for the bathroom. He considers his walker a few feet away. He should use it for support. He has fallen at least three times this week, and his body is sore from the damage. He can't fall again.

He wonders if it's his body that breaks down and then he falls, or his brain that loses focus causing him to fall. Probably both. More than once, he has been woken by his home health aide on the floor, where he fell. The effort to get back up is too much. The frustration unspeakable.

He eyes the walker. In this crowded space, it can be as much an asset as a detriment. Is he strong enough to go it alone? A heavy, head drooping sigh causes him to look down at his feet and notice the rash creeping up his legs. Problems, everywhere he looks. His glances focuses in on the ice cream he took out hours ago, melted on the counter. Oh well. He can pour cereal in it and have it for breakfast, if he ever gets up.

He begins to close his eyes again, telling himself he needs just a little more rest before he makes the attempt, but really he's just unable to find the motivation to move himself.

The phone rings, distracting his thoughts, rousing him a bit, taking him to a more hopeful place.

He's waiting for my call. 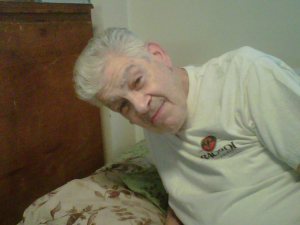 You can read this essay and others like it, along with many happier ones over at IceScreamMama.com

Call Of Duty
8 Exercises to Reduce the Effects of Aging