Thanks to some super style sleuthing, the gals at Fashionista and Styleite have uncovered a surprising instance of "wardrobe repeat": Vogue's October 2010 cover photo, featuring a colorful Carey Mulligan in Chanel couture, appeared in nearly identical form on the covers of German Glamour (December 2010) and French Elle (November 2011).

Fashionista wondered aloud if this is even legal, a thought that crossed our minds too -- it's one thing for a Conde Nast publication like Vogue to share with another Conde mag, like Glamour. But Elle is a whole different company -- how was this allowed?

The truth is, it's not the first time. We noticed in passing last month, when Kate Moss graced the cover of Marie Claire Australia for the November 2011 issue in a Chanel Spring 2011 feathered dress. Gorgeous pic, but just one problem: the exact same photo appeared seven months earlier on the May 2011 cover of Vogue Nippon.

Like with the Carey Mulligan mags, the two publications are owned by different corporations -- so would think there's be no sharing allowed, unless the photographer who took the pic licenses it his- or herself. But apparently sharing photos is status quo in the international magazine scene?

See the offending covers, with both Carey and Kate, below. 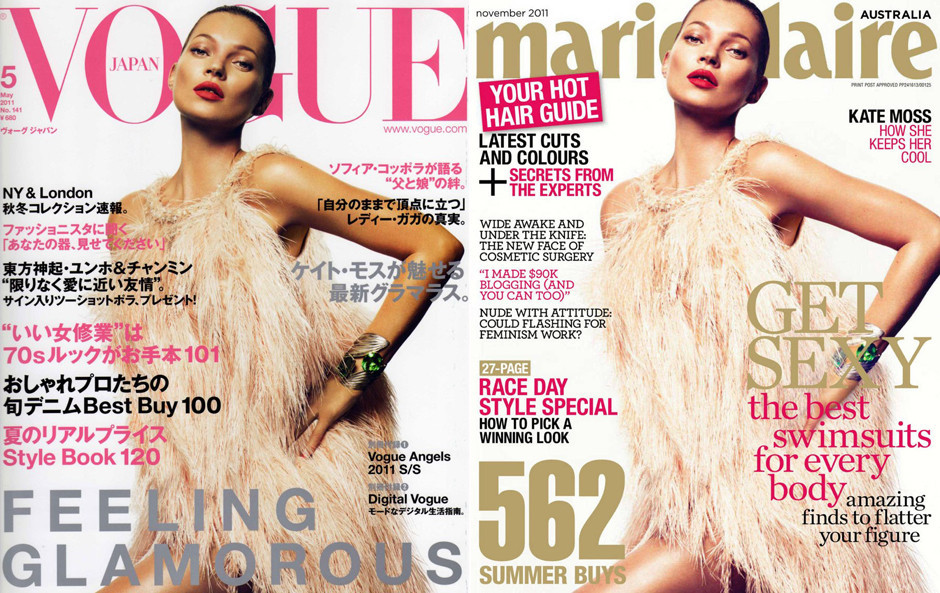