In concept, setting out to unearth jewels of wonderment only realized by constant solo journeying is a lifestyle that outsiders may marvel at. In practice it can be a litany of checklists, bubbling with OCD rumblings- " ...lay footsie socks inside laptop for easy access when stripping down through security," intense wardrobe vetoes and early birthday celebrations for all. A frequent, often last minute travel schedule, may be unsettling for some, but has become commonplace for me as a travel enthused journalist. Dull -- never, adventurous -- to say the least, lonely-depends on one's perspective, memorable -- always.

Carving out a path that includes a healthy monthly dose of CO2 from thirty thousand feet up -- call me a junior jetsetter or guerilla backpacker. I may have mastered how to sail through customs while making a 'too close to hold' international connection but can still get tricked up in baggage claim.

Completing the shooting of Season 2 for Ocean Style TV, I engaged in a 30-day traipse through three countries- Jamaica, Trinidad and St. Lucia. With reports of holiday travel finally sparking back to pre-recession life, I've compiled a list of Do's and Don'ts -- dedicated to my fellow solo female adventurers!

1. Do -- Hold steadfast to your itinerary. Rare travel victories are won once deviating off course! Upon arrival at Philadelphia airport at 4am, complete with my pink faux leopard skinned/glitter trimmed bag on wheels in route to St. Lucia, I was informed that my flight on a major carrier had been pushed back due to weather. The crew scheduled to guide me to the holy land of a well-prepared Health and Wellness Retreat, had arrived late into the domestic hub. Due to FAA regulations, they were sent 'home to rest' for the day before making the trek. With the prospect of a coco body wrap and Swedish massage in the rainforest dancing in my head, I opted for an alternative route. 20 hours and 4-flight transfers later, I arrived in St. Lucia WITHOUT my pink leopard skinned/ glitter trimmed bag on wheels!

2. Don't Freak Out! (In the words of hip-hop lyricist, Common, "...one day it'll all make sense.") When travel plans don't go your way, as in the case of my luggage that took a private tour of the Caribbean before being returned the night before my departure, spending $2 per minute to cuss out airline reps while simultaneously having an army of family doing the same from the U.S., is soul sucking and unproductive -- particularly in the midst of a retreat. As an on-camera reporter/producer I packed the usual 'necessities' I thought would prepare me to document attendees spiritual breakthroughs -- multiple wardrobe changes, amazing wedges, thigh sucking Spanx, HD makeup, waterproof eyelashes, a microphone, tape supplies and hard drives. Clearly- not a 'carry on' type of affair. While I've dealt with short-term luggage separation, it's a totally different beast when your goods are recovered post-shoot. My 'OM' moment came quietly after being reunited with my possessions. After nearly a week of buying little, borrowing some, hand washing and re-purposing the few pieces I had (transforming a waist sash into to a head wrap, into a neck-tie) I realized that by letting go, I could survive with far less than I'd imagined. A hard dose of minimalism for my ego to swallow -- allowing room for my inner chi to thrive.

3. Do -- Indulge in trinkets that make sense. Nothing's worse than receiving a potholder that reads "Fresh Hot Roti-Giiit It!" after a friend's island escape and racking your brain on how to morally and stylistically re-gift it. No disrespect to much needed economic growth, but most pre-packaged trinkets will likely not impress. If you're planning a holiday getaway and want to share relics- dig deeper. While it may be a challenge to package up delights prepared by local Montego Bay vendors -- (think fresh callaloo and deliciously doughy festival), authentic spices and tasty marinades are easy to find. One of my favorites- a chocolate stick, grown from cocoa plants fermented at Fond Doux Estate in St. Lucia, one of the world's largest distributors of Hershey's chocolate.

4. Don't -- be afraid to shop around...for cab drivers that is. No matter how enticing the allure of riding passenger side with soca tickling your spine may be-just say no to jumping in the front! After a late night editing session in Trinidad, I contacted a reputable car service for a ride back to my hotel. Something told me to grab my local phone after taking the front seat. A few minutes into our trip I made the mistake of telling the seemingly polite driver that I was craving KFC. (KFC in the Caribbean is said to be the best, as they're able to add their own local seasonings). He jokingly replied -- "I'll take you to KFC -- YOU get wings for you and a snack-pack for me!" I chuckled. A few minutes later, he repeated the same joke. "Oh no, its ok -- I'm not really that hungry, I was just kidding," I replied. Next thing I knew we were pulling into KFC. When I looked at him crazy, he simply cackled. I thought that the awkward joke was over until he suddenly detoured-pulling into two more KFCs. Now I felt weird. Fit and healthy looking, it was obvious that my driver had not missed a meal. Unsure of his motives, or how they'd possibly be carried out in a well-lit, overcrowded KFC parking lot, I staged an imaginary 911 call to his boss-the dispatcher. Within 5 minutes I was safely escorted back to the hotel.

My next driver was grandfather comfortable. The pleasantly balding East Indian Trinidadian man had been servicing Port of Spain for 25 years. Our conversation was fine and jolly until he affectionately called me a Negro. I was speechless and stunned. Did he somehow forget that this was no longer the 1950s and that African-American, Afro-Caribbean or even black were far more acceptable racial terms? Completely irritated and confused I quickly "bbmed" a Trinidadian friend who informed me that Negro was still an acceptable term in Trinidad. Actually referring to someone as 'black' is more of a sign of disrespect, particularly if spoken by a person of a fairer complexion. Wow, I thought- the existing complexities of our post-colonial diaspora.

When I finally encountered Osie, I was ecstatic. Owner of an independent taxi service, I was initially skeptical of his 'Flynt Flossy' royal blue BMW with rims. Slipping into plush velvet seats, I was whisked away by a smooth classic Motown medley. Leery about falling into the 'uptight American traveler' box, I allowed myself permission to nest, sinking into the sounds of Smokey Robinson, Marvin Gaye and The Four Tops. Reminding myself that sometimes it's ok to be gently comforted by home.

5. Do- Familiarize yourself with local politics before arriving at your choice destination: As the daily U.S. dealings of the political world are often handed to us like a muffin to accompany our cup of weather every morning--oftentimes this is overlooked when heading to your favorite winter hideaway. Especially in fact if your main goal is to do just that. Working in Chaguanas, Trinidad during a government imposed curfew greatly affected our need to capsulize interviews and take major heed to editing deadlines. With the purpose of the curfew to reduce heavy drug smuggling, gang activity and a slew of recent killings as a result, the government-imposed curfew from 9 p.m. - 5 a.m. restructured the daily lifestyles of many. 'Curfew parties' during lock down hours were hosted in hopes maintaining lucrative nightlife revenue. Anyone spotted on the streets during curfew were subject to a fine and jail time; proving its always best to know before you go.

6. Don't -- Leave Home without It: Your center-whatever keeps you grounded and ready for an adventure. Whether it be traveling with a good energy bauble, adding candles to your hotel room or even treating yourself to an extravagant luxury den, like Jade Mountain, a 3-walled oasis in St. Lucia complete with an infinity pool in your living room and the Piton Mountains as your backdrop, allow yourself to indulge.

My center throughout my journey -- a holistic detox. After surviving initial cravings, eating fresh vegetable and fruits like papaya, mango and soursop, gave me a clearer perspective while navigating through an intense travel and shooting schedule, lost luggage, hotel mishaps, unsavory bug bites and a cast of unforgettable cab drivers.

It allowed me to truly enjoy my time in the sun -- ziplining high above the brush, visiting a bubbling volcano, taking a dip in sulphur springs and drinking sugarcane juice fresh from the forest. 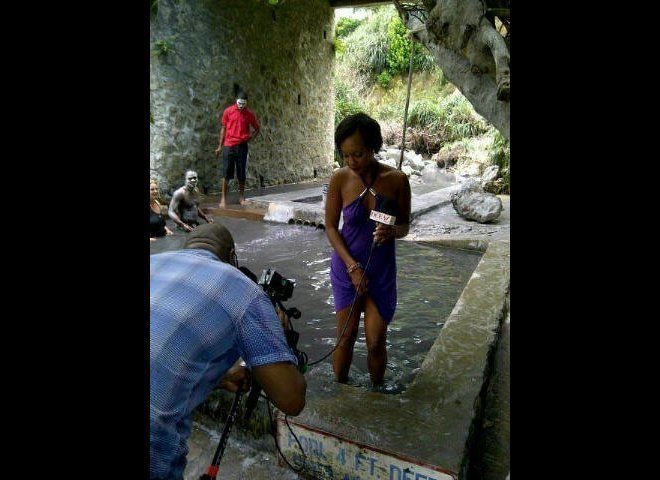