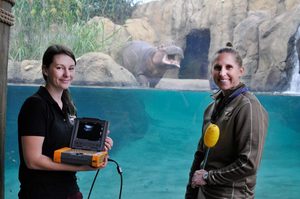 It wasn't long ago that we shared the news of our ultrasound success with the world. We had made history and captured the first in utero images of a Nile hippo fetus, confirming that one of our zoo's newest and most charismatic residents, Bibi, was pregnant for the first time in her life. With proof that a little bundle of joy was on the way, our department busily set about finalizing birth plans, baby proofing, and discussing every possible "what if" scenario we might come across. At that point we were roughly 6 months into an 8 month gestational period and we were right on track and prepared for a baby hippo's arrival sometime in March of 2017. 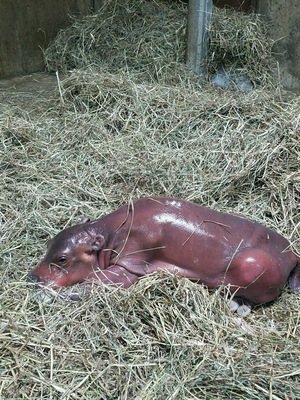 But even the best laid plans do not always prepare us for the curveballs that Mother Nature sometimes throws. Early on Monday, January 23rd, Bibi started exhibiting behaviors that were consistent with signs of labor. She seemed agitated and uncomfortable, and her usual carefree water acrobatics had been replaced with concentrated and methodical laps around the pool. She held her tail at weird angles and kept rolling onto her sides, trying to ease some sort of discomfort she was obviously feeling. These would have been welcomed signs and indications that labor was imminent, except Bibi's baby was not due for another 6 weeks. As the day progressed and her behavior continued, we frantically rechecked our records, notes, video and photos, recalculating the timeline, hoping our math was wrong. But at 2:58am on Tuesday, Jan. 24th, Bibi delivered her baby, 6 weeks premature and at least 25lbs too small. 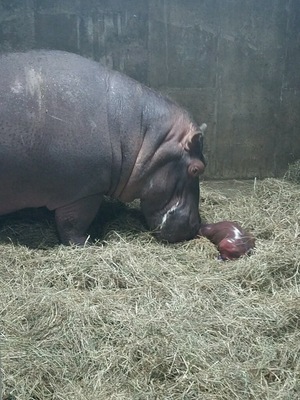 While the vast majority of the focus was on the baby, Bibi had also just been through a pretty shocking ordeal. She had just delivered her first baby. Once the baby was on the ground, it attempted to stand and move around a bit, but was obviously very weak and extremely small. Bibi seemed curious about the baby, but also a little confused. She inspected the baby, lowering her massive head down to the tiny creature and sniffing at her, but ultimately ended up just lying on the ground a few feet away. Keeper staff who had been watching on cameras to provide privacy came into the holding area to assess. They asked Bibi to shift away from the baby into a separate holding so that they could safely put bedding down and do a quick physical exam of the neonate. Bibi readily shifted away from her new offspring, entirely focused on the food presented to her. When keeper staff examined the baby and repositioned her onto dry bedding, Bibi watched from behind the protective barrier but did not appear to be concerned and did not react to our handling the baby. 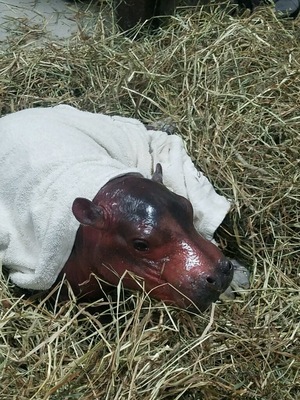 When Bibi was shifted back into the holding space with the baby, she again inspected it for a bit, scooted it around on the hay, but ultimately decided to just lay down beside it and nap. Keepers continued to observe for approximately 30 minutes to see if the baby could find the strength to make its way over to mom to nurse, but her energy seemed only to wane as the minutes ticked by and she made no forward progress. It became apparent that if this baby was going to survive, it would need intensive, supportive care and the decision was made to intervene.

The keeper, veterinary and nursery staff sprang into action, establishing a make-shift NICU in the warmest part of the hippo building and reaching out to zoos all over the globe. The responses we received made it clear that hand-raising a preemie hippo was not an endeavor many zoos had undertaken. Safely maintaining her core body temperature without drying out her delicate skin became an arduous balancing act, and determining an appropriate formula that most resembled hippo milk proved to be another challenge. Fortunately for us, various rescues and sanctuaries in Africa were able to provide us with critically helpful information based on their own experiences with caring for orphaned baby hippos. 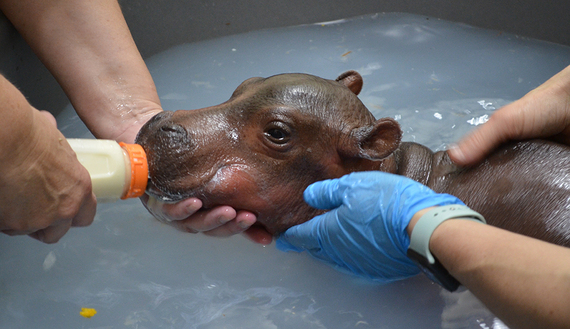 Additionally, Bibi's trained voluntary ultrasound behavior proved to be an ace in the hole when we were able to quickly transform it into a voluntary and safe milking behavior. As far as we know, milking a hippo meant we had accomplished another feat that had not ever been attempted by other zoological institutions, and it allowed us to not only provide the baby with crucially important colostrum, but also gave us an opportunity to have the milk analyzed so that we could precisely develop our formula to match the exact nutritional components of Bibi's milk. As we set out on our daunting task to nurse the baby to health, the entire staff was hopeful but guarded. The baby's premature entry into the world meant that she had a very steep uphill climb ahead of her. But being born into a zoological institution full of capable and dedicated caregivers gave her the best chance possible for survival.

A common question circulated around the zoo and around the internet as the story spread: why was the baby premature? It is not uncommon for first time mothers of any animal species to struggle with the labor, delivery and even the care of their first offspring, and similarly, premature births can be a common occurrence as well. It's not entirely understood why the first time can be so difficult, but there was one element of this baby's birth that would play a crucial role in the story. Though Bibi spent much of the ~19 hour labor process in the water, for whatever reason, she chose to deliver the baby on land. This fortuitous detail is the only reason we were able to save the baby and may very well be an explanation for the lack of similar scenarios at other zoos around the world. Had the premature baby been born in the water, like many hippos are, her frail body and weakened state would very likely have meant that she would have drowned within minutes before we had a chance to intervene. 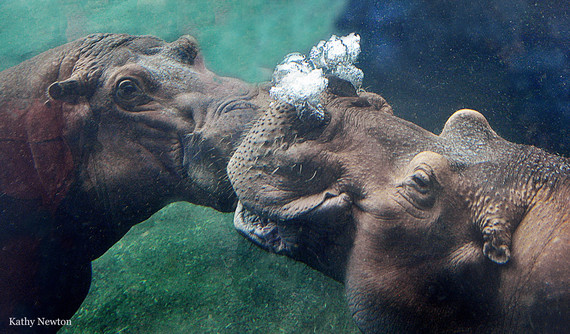 But fortunately for all of us, she was born on land. So at the end of the day, in spite of all the odds stacked against her, our sweet little hippo baby was given a real chance at life. Though it breaks our hearts to know that Bibi is not the one caring for the baby, almost immediately, Bibi went back to business as usual and has never attempted to search for the baby, nor has she displayed any signs of stress or depression. In fact, within a week of the birth, Bibi was already beginning to express breeding interest in Henry again (and Henry, all too emphatically reciprocated!). With one preemie hippo already in the nursery, the decision was made to put Bibi on birth control at this time. Our zoo will work with the hippo SSP (Species Survival Plan) to decide if and when Bibi and Henry will breed again in the future.

In the meantime, Bibi and Henry keep playing the role of newlyweds in love as the baby hippo is cared for around the clock by a dedicated team of animal experts. We named her Fiona and look forward to the day when she can be reunited with her mom and dad. Fiona is making forward progress, but today she is still very much a preemie with a lot of hurdles ahead of her. We continue to take it one day at a time and look forward to warm weather and a reunited hippo family of 3.

About the Cincinnati Zoo & Botanical Garden
Cincinnati Zoo & Botanical Garden is home to more than 500 animal and 3000 plant species and is internationally known for its success in the protection and propagation of endangered animals and plants. The Zoo's research facility, CREW, is a global leader in wildlife conservation and is dedicated to "Saving Species with Science". Zoo and CREW staff lead and support conservation projects all over the world. Learn more about ways you can support the Zoo's mission.