Carl Bildt has been foreign minister of Sweden since 2006 and was prime minister from 1991-1994. He spoke to the WorldPost's Nathan Gardels earlier this week at a conference on the Ukraine crisis at Harvard University’s Center for European Studies.

WorldPost: You are among Vladimir Putin’s toughest foes in Europe. Why are you so much more outspoken than most other European statesmen on Russia’s annexation of Crimea and meddling in eastern Ukraine?

Carl Bildt: It is for a very simple but extremely clear reason: Europe’s borders have been drawn in blood, and to change them will draw blood again.

One thing that was absolutely central in all agreements with Russia and Europe at the end of the Cold War was that borders would not be changed, no less changed by force. By crossing that line, Putin’s actions threaten the entire basis of the post-Cold War order in Europe.

WorldPost: The U.S. and Europe have imposed ever-stiffer sanctions on Russia over its invasive meddling in Ukraine. NATO has announced a rapidly deployable force for the region. And now there is a cease-fire. Is Western pressure working?

Bildt: There is a cease-fire, yes. But a cease fire is a cease-fire, not peace. What is needed is some sort of political solution. That will depend on the aims of Vladimir Putin on the one hand and, and on the other, the determination of the European Union.

I tend to believe that Mr. Putin has more far-reaching aims not yet achieved. But he will adjust his behavior according to what we do, or don’t do, going forward. 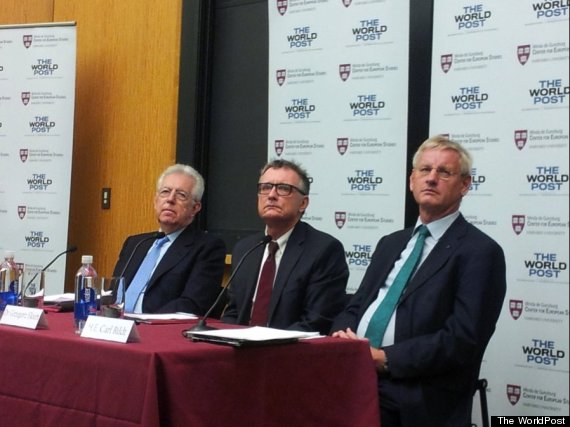 WorldPost: What are Putin’s far-reaching aims?

Bildt: His ambitions seem to go back and forth between two concepts. One is the Eurasian community, which includes not only Russia nations, but also Kazakhstan, for example. The other concept is what he calls the “Slavic core” –- which he defines as wherever Russians are.

Either of these aims certainly has far-reaching implications not only for an independent Ukraine, but, as I said, also Kazakhstan as well as some of the Baltic states. I would also add Belarus.

Putin has been obvious enough about the Slavic core or Russian hub to create a distinct disquiet all around.

And he’s becoming more assertive in other respects. Even in Sweden, we’ve seen the most serious incursion of our airspace by Russian aircraft in the eight years I have been foreign minister.

WorldPost: What behavior of the EU is necessary to restrain Putin’s ambitions?

Bildt: We have to be careful. Ukraine is an independent nation. It has the right to choose its own destiny. If it wants to belong to the EU, that is up to Ukrainians. Russia has no right to dismember or destabilize independent countries if it doesn’t agree with their choices.

What Europe has to do most of all for the longer term is to help Ukraine build prosperity with aid and investment through trade and economic ties.

Practically everyone wants a closer, primarily economic, relationship with the EU because that is seen as the path toward modernization of their economy and the stabilization of their societies.

Even Russia wanted this. The EU had a “partnership for modernization” with Russia if you go back a couple of years. At the end of the day, it didn’t amount to much. But on paper, it is not dissimilar from the “Eastern Partnership” accord we made with the Ukraine.

Everything changed when Putin came back to the presidency of Russia for the third time. He was a changed man. He started speaking about the Eurasian Union. EU partnership negotiations with the Ukraine started in 2007 and ended in 2011. They took a long time. Putin launched the Customs Union with Ukraine in very short order. That was his way of throwing down the gauntlet and announcing his turn toward a Eurasian Union and away from the West -- and that he wanted to take Ukraine with him.

WorldPost: Some are saying that this moment is like 1956 when the Soviets invaded Hungary and, despite the high rhetoric of the West about freedom, nothing was done. At that time also, the West was preoccupied with the Middle East as the French, British and Israel tried to take back the Suez Canal.

Bildt: There is a parallel in the sense that, yes, the West again has been preoccupied with the war between Israel and Hamas and ISIS. Before that, a year ago, it was the issue of chemical weapons in Syria. I remember at that time that we had a meeting of EU foreign ministers in Vilnius to discuss the Eastern Partnership. U.S. Secretary of State John Kerry came and spoke exclusively about Syria.

We tried to say “things are happening here that merit attention.” It was hard to get a focus then.

I do think, though, in the past year Washington has really been important in shoring up some of the more uncertain members of the EU with close economic and energy ties to Russia when it came to imposing meaningful sanctions.

WorldPost: Last weekend there was a large demonstration in Moscow against what Putin is doing in Ukraine. What are the implications?

Bildt: The mounting casualties coming back to Russia are a keen source of discontent for the public and an embarrassment for Putin. He can handle dissidents and oligarchs who may cross him the wrong way, but even for Putin the mothers whose sons have been killed are very difficult to deal with.

WorldPost: What is the ultimate arrangement you would like to see in the Ukraine?

Bildt: The internal arrangement, of course, has to be decided by the Ukrainians themselves and not by outside powers. What they are working on at the moment is a new structure of decentralization. They say they’ve learned from the Polish experience of governance reform.

Ukraine is a big country with 45 million people. Most countries that size in Europe are less centralized. The management of the economy will necessarily require some centralization of policies, such as trade and finance, as it does for the European single market. Of course, that is precisely where Russia wants to have an influence. That is the nub of the issue in a sense.

WorldPost: And the ultimate security arrangement?

Bildt: It seems we are headed for the moment, unfortunately, into another “frozen conflict” like others around the borders of Russia, with the threat of Russian military might from outside or its clandestine presence inside holding the situation hostage.

Our strategy in the West will have to be to contain those conflicts until such time as there can be a long-range resolution. Putin has made it clear that he will not accept military defeat for his friends in the Donbas region of Ukraine. So that’s it. Ukraine has no real possibility in the short term other than to live with this reality.

Those regions in limbo under Russian influence but outside its borders will in effect be “people’s republics without peoples.”