The true definition of creativity is "the ability to transcend traditional ideas, rules, patterns, relationships, or the like, and to create meaningful new ideas, forms, methods, interpretations, etc." Just the very word "creative" evokes feelings to some of anxiety and to others pure excitement. We often believe we experience true creativity in many works of art, however, in reality many artists works are contrived or are to be more respected or highly influenced by other artists. This is the stem of all creativity in that we are all influenced to some degree or another. However, where does the root of this influence lay? It lies in the human form and deeper yet the human condition. However, to study the human condition one often needs to have an interpreter of expertise if you will, someone other than a psychologist or medical doctor to show to the world who they see through their own unique set of eyes in their own individual way. This is where I introduce Swedish artist Carl Kohler (1919-2006).

Kohler, a neo-modernist/abstract portrait artist was born from his own exceptional artistic practices based on personal knowledge and awareness. He wasn't afraid to delve beneath the exterior human form to pull out and examine his subjects' intricate psyches and ultimately their existence.

Kohler's lively portrait works can be felt as much today as they were when first executed. His older portraits created some 30-40 years ago seem to have transcended the years and are, ironically, more relevant today than they were then.

Kohler's portraits are manifestations of his ability to identify with his subjects, many authors and musicians, who he read and heard and took the time to try and comprehend the deeper meaning of their works and ultimately put a face to the artist. Quite often was the case that he created a new and profound image of his subject!

Many literary icons such as Virginia Wolf has been reincarnated in a fragmented way with the authors countenance recreated in collage with carefully cut and torn pieces of paper or canvas and drawn and painted upon. A careful study of the Woolf portraits reveals the Wolf's own disassembling mind as she grew closer to taking her own life. 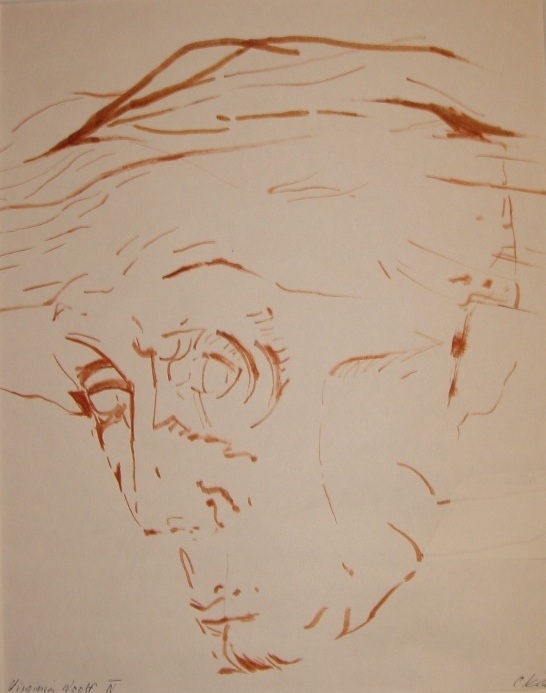 In "James Joyce -- Progressively Going Blind," the portrait has evolved from any signs of a recognizable image to a near non-objective portrait exposing what the author may have experienced in slowly experiencing his life going black. By all accounts this portrait could have been painted today. 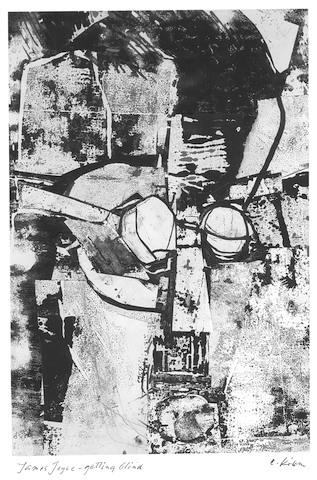 Author and painter Henry Miller's life was said to have been perforated with trials and tribulations of immense proportions. In Kohler's woodblock portrait of "Henry Miller As a Demon," he suggests an imploding human skull and the anguish spilling from an abstracted mandible. The use of black in on white paper further suggests the positive background of the artist and the negative laying within the artists mind. 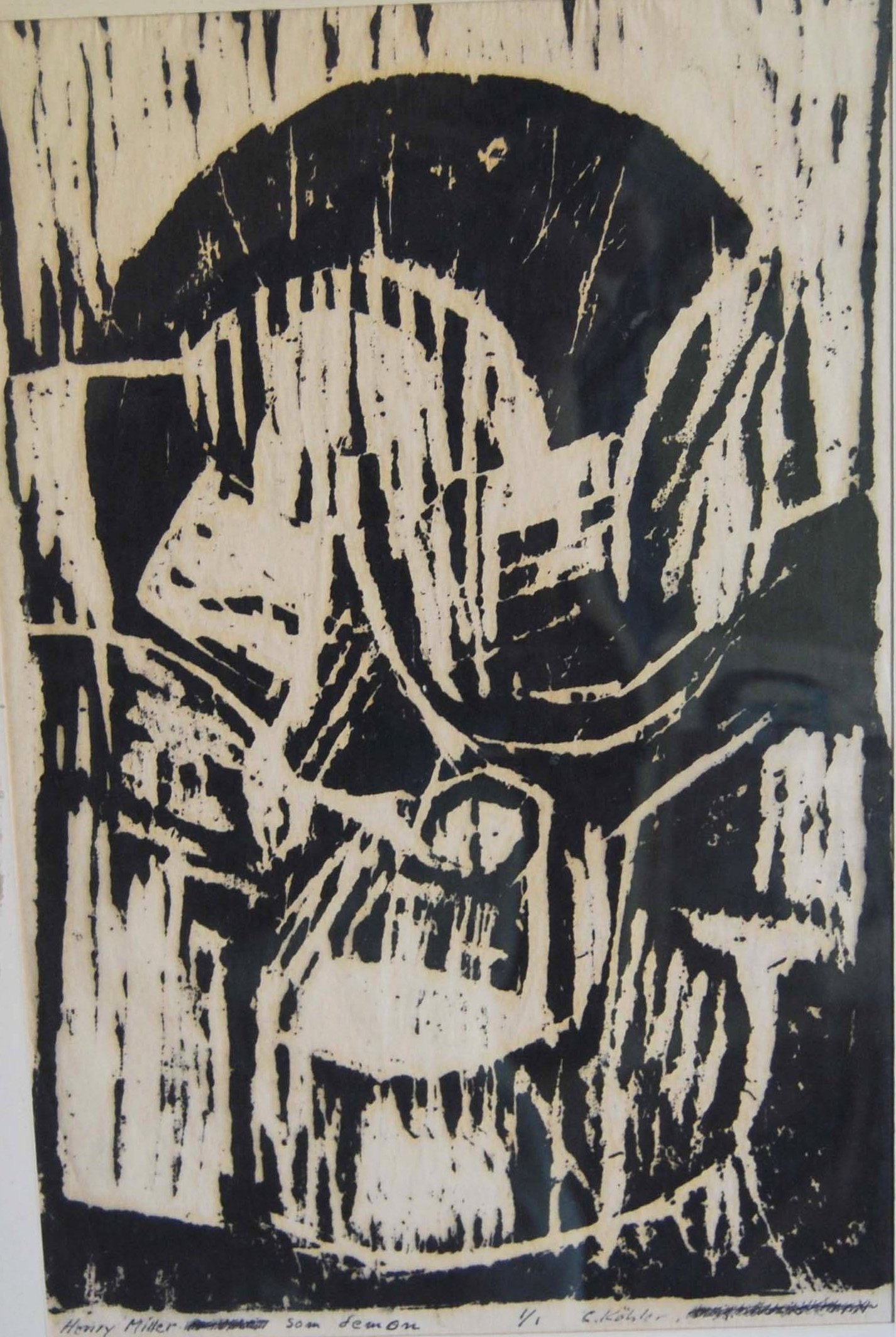 French writer and film director Marguerite Duras is depicted by Kohler in a double image, a magnificent composition of torn and fragmented bits of paper which have been masterfully arranged into a portrait that near speaks of the two careers of Duras. Colours are scratched in on some areas while fluid and powerful brushstrokes are seemingly applied elsewhere. Kohler has created a balance in this portrait; one of a life of two disciplines mastered something of a rarity in today's world. 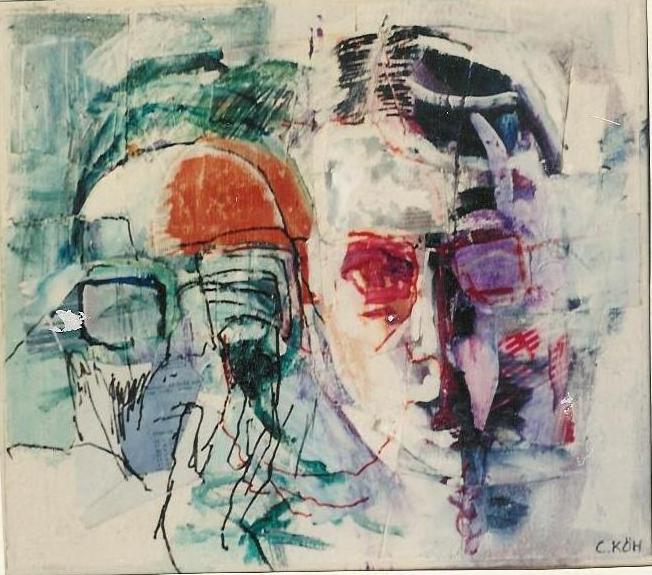 Today we are witnessing a refreshing renaissance toward this approach to portraiture. Portrait art in North America was shaped on the foundations of traditional European art however, it has almost always had direct competition with photography which could reproduce a likeness quicker and in more cases than not exacting. Since given the choice since the mid 1800s art enthusiasts would chose the cheaper and more avant-garde form of having a portrait created. Creativity was rarely considered.

Kohler wanted to create his own personality into his art by infusing it with the personality of his subjects -- some he knew personally, many he did not other than the legacy they left behind for him and the rest of the world to experience. He created new forms to convey the energy and force of the importance and the impact these subjects had on his life whether they be poet, writer or musician. More often than not, he created portraits that tempt the general public to penetrate themselves into the works and untangle the many meanings hidden within, bringing about a new or even renewed awareness of the authors themselves. Most of his portraits are not for the faint of mind.