Three more women have come forward with allegations against Bill Cosby. Carla Ferrigno, Angela Leslie and Louisa Moritz are three of the 11 women who have now publicly identified themselves and accused Cosby of assaulting them in some form.

Ferrigno, Leslie and Moritz's claims join a growing list of allegations made against the 77-year-old actor. In 2005, Andrea Constand filed a lawsuit against Cosby claiming that he drugged and molested her in 2004. Not long after, Tamara Green went on the “Today Show” alleging she had a similar experience with Cosby. Twelve other women were anonymous witnesses in the Constand case, claiming they also had similar encounters with the comedian. One by one these women have come forward to publicly identify themselves, including Barbara Bowman, Beth Ferrier and, just days ago, Therese Serignese who spoke at length with The Huffington Post. Other women to recently make their allegations against Cosby public include publicist Joan Tarshis and supermodel Janice Dickinson.

Carla Ferrigno, actress and wife of actor Lou Ferrigno, alleges that Cosby attacked her in his home in 1967 and attempted to force himself on her before she escaped. “He walked over to me and grabbed me, pulls me really tight to him, kisses me on the mouth, like really really rough. And I just took my hands and I pushed him away,” Ferrigno told KFI radio station.

Model and actress Angela Leslie says Cosby sexually assaulted her in a Las Vegas hotel room in 1992, telling the New York Daily News, “With his hand on top of mine, [Cosby] had me massage his penis.”

Louisa Moritz, a former actress best known for her role in the 1970s show “Love American Style," claims that Cosby sexually assaulted her, forcing her to perform oral sex on him in a green room in 1971 before going on the Johnny Carson's "Tonight Show," TMZ reported.

Cosby’s attorney, Marty Singer, responded to Ferrigno’s allegations in a statement to The Huffington Post. “This continuing pattern of attacks on Mr. Cosby has entered the realm of the ridiculous, with a purported ‘forceful kiss’ at a party in 1967, nearly 50 years ago, being treated as a current ‘news story’ and grossly mischaracterized as a ‘sexual assault.’ This is utter nonsense.”

“People coming out of nowhere with this sort of inane yarn is what happens in a media-driven feeding frenzy,” Singer added.

The Huffington Post subsequently reached out for further comment on Moritz and Leslie's claims, but had not received a response at the time of publication. 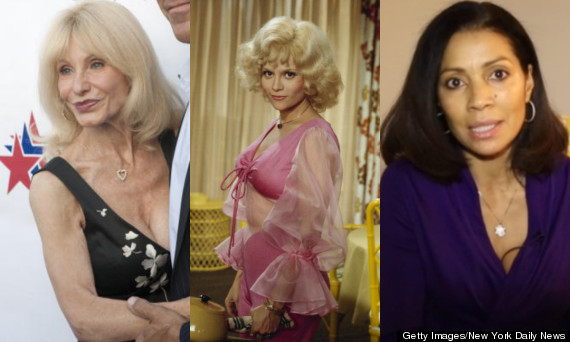 Carla Ferrigno told KFI radio station on Nov. 20 that she went on a date with a friend of Cosby's in 1967. She claims that he invited her to the comedian’s house after their dinner to meet up with Cosby and his wife Camille. After about 10 minutes, the two couples went to the movies, and then returned to the Cosbys’ home to play pool.

Once back at the house, Ferrigno says that both her date and Camille left the room as Cosby and Ferrigno played pool. Immediately after the pool game ended, Ferrigno claims that Cosby grabbed her.

“He was much bigger than me. Much bigger and he pulled me so hard and so rough. I had never been treated so roughly and he pulled me hard to him so hard,” she said on KFI radio station. “And then kissed me so hard, right in the mouth. No one has ever been that physically violent with me. I was stunned. I was frozen. I took all my body strength and used both of my arms to stop him and push him away from me. He was so forceful.”

Angela Leslie told the New York Daily News that she was an aspiring actress when the 30-year-old met Cosby in 1992, when a driver “delivered” her to the comedian in his Las Vegas hotel suite. Once in the room, Leslie claims that Cosby told her: “If you want to act, show me what you’ve got. Pretend you’re intoxicated.” She says that he then offered her a drink, which she tasted and declined, because it was filled with alcohol. “Then he asked me to go into the bathroom and wet my hair. I walked back out, and he had removed his clothing and gotten into bed,” Leslie said.

She said the comedian pulled her into bed and put lotion in her hand. “With his hand on top of mine, he had me massage his penis,” Leslie said. “He masturbated with my hand. I wasn’t pulling back. I was in shock.” After a while she said Cosby became bored and told her to leave, telling the New York Daily News, “I didn’t drink the alcohol, and maybe since I didn’t pass out, he decided to get rid of me.”

Louisa Moritz claims Cosby sexually assaulted her in 1971 in New York’s NBC Studios. Now 68, Moritz tells TMZ that she was waiting in the green room for an appearance on the Johnny Carson’s “Tonight Show” when Cosby came into the room. She said he told her he was impressed with her work and "implied that he was going to see to it that I will become a major star through his direction,” Moritz told TMZ.

“Suddenly [Cosby] approached me and took out his penis, which was now in the line of my face and pressed up against it,” she said. "He took his hands and put them on the back of my head and forced his penis in my mouth, saying, ‘Have a taste of this. It will do you good in so many ways.’” Before walking out of the green room, Moritz recalls Cosby saying to her: "Now you don't want to upset me and the plans for your future, do you?"

Although the statute of limitations for any sexual assault committed in 1971 would have expired, Moritz told TMZ she still plans to file a civil lawsuit against Cosby.

Cosby was set to star in his own Netflix comedy special and a new NBC show, both of which have been since been postponed or canceled.

Kristina Ruehli, who says she was one of the anonymous Jane Does set to testify in Andrea Constand's 2005 lawsuit against Cosby, spoke to Philadelphia Magazine. The 71-year-old claims that in 1965, at age 22, she met Cosby while working as a secretary at a talent agency. She says Cosby invited her to a party, and when she showed up, it was just the two of them. "He proceeded to pour some bourbon," she told Philadelphia Magazine. "I drank a bourbon-and-7 at the time. I could really hold my liquor. I'm Irish. And I had a couple of those -- just two -- and then I just don't remember much." She now believes that he drugged her.

According to Ruehli, her next memory was being in Cosby's bed:

It was all foggy, and I woke up in the bed. I found myself on the bed, and he had his shirt off. He had unzipped his pants. I was just coming to.

He was attempting to force me into oral sex. He had his hand on my head. He had his cock out, and he had my head pushed close enough to it -- I just remember looking at his stomach hair. And the hair on his chest. I had never seen a black man naked before.

And it never went past that. I immediately came to and was immediately very sick. I pushed myself away and ran to the bathroom and threw up.

Renita Chaney Hill, now 47, told CBS Pittsburgh that she met Cosby in Pittsburgh when she was a 15-year-old model in the 1980s. She was cast in Cosby's “Picture Pages,” a series of educational TV segments, and was in contact with the comedian over the next four years. Hill also now believes that Cosby drugged her on more than one occasion, insisting that she drink when she was underage.

“One time, I remember just before I passed out, I remember him kissing and touching me and I remember the taste of his cigar on his breath, and I didn’t like it,” Hill told CBS Pittsburgh. “I remember another time when I woke up in my bed the next day and he was leaving, he mentioned you should probably lose a little weight. I thought that odd, how would he know that? I always thought it was odd that after I had this drink I would end up in my bed the next morning and I wouldn’t remember anything.” CBS Pittsburgh reported that Hill told them she does not remember whether Cosby forced sex on her, because she was drugged. She claims she cut off contact with Cosby when she was 19.

The Huffington Post reached out to Cosby's lawyers regarding the claims made by Hill and Ruehli, but at time of publication had not heard back.