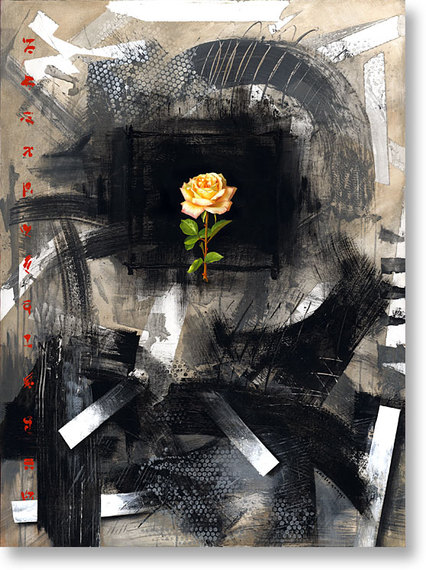 my gaze
has no need to fix on objects
that already exist, exact, in memory.
I know the customs and souls
and that dialect of allusions
that every human gathering goes weaving.
--Jorge Luis Borges

The ascent to the heights of nonobjective art is arduous and painful, but it is nevertheless rewarding. The familiar recedes ever further and further into the background. The contours of the objective world fade more and more and so it goes, step by step, until finally the world -- everything we loved and by which we have lived -- becomes lost to sight.
--Kazimir Malevich 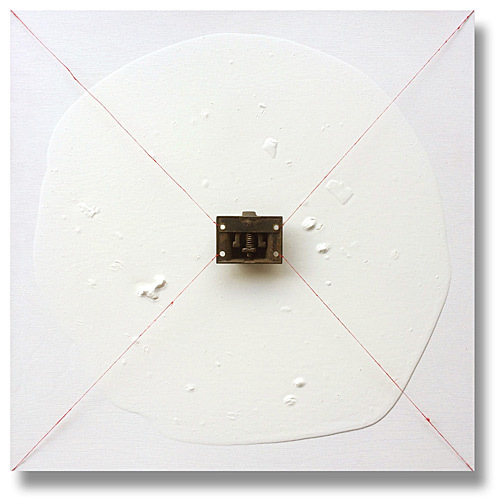 Carlos Grasso was one kind of painter for a long time, and then he became another. He once pursued a staunch Old Master style under the tutelage of David A. Leffel, a modern master of classical technique, making painstaking portraits and still lifes in the uber-classical tradition of Rembrandt and Vermeer. Then five or six years ago, Grasso had an epiphany. "The neurons just started firing differently one day, and I had a new style." Which at first was actually every style he could think of in rapid succession, but eventually he settled into the rich abstract expressionism and juxtapositional collage works of today -- seas of form and color, positing resolutions to the tension between abstract and figurative visions, which he also sees as a tension between the external and internal worlds of experience and inquiry. "I never 'got' the whole modern art thing," says Grasso, "and then suddenly the language revealed itself, and I felt compelled to explore this new world -- it corresponded to a new world that I had been feeling inside." 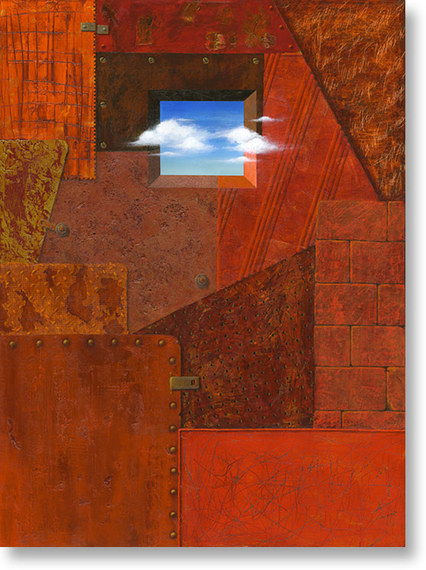 He has been pursuing this exploration through two overarching, interrelated series, "Inner Structures" and "Red, White, Black" which although different in several important ways, do borrow from each other. The "Inner Structures" paintings, for example, almost always follow a sort of compositional template in which a single, tightly rendered object/images borrowed from his classical phase -- a rose, a pomegranate, a human heart -- rest atop, or rather hover above variations on abstract, atmospheric color fields, like weather systems built of mark-marking, or boxes of rain. Although there are divergent styles and techniques in play, Grasso choreographs a deft interplay between them, so that certain shapes, gestures, motifs, and colors appear in a fractal rhyme scheme of recombinant configurations across the whole. The "Red, White, Black" works use a similar syntax, but as a series, Grasso is looking there at graphic strength, strong emotion, and what happens when the balance between gesture and render tilts decisively toward pure feeling. 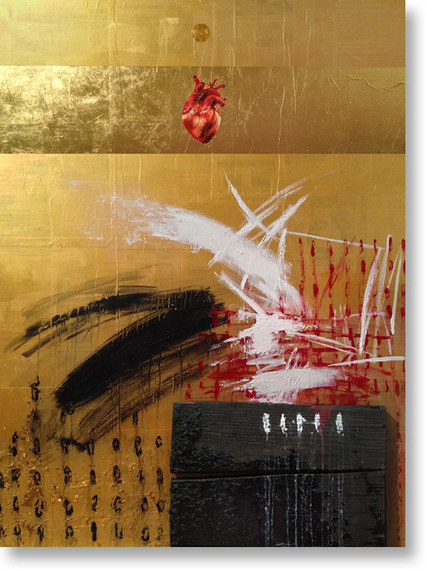 One of the more affecting of Grasso's motifs has to do with language. He frequently includes either calligraphic writing a la Twombly, or else collaged letterform stencils as elements of the composition -- but he is adamant that this is without meaning or message, saying, "It references speech but has no content." It's more the concept of language as a bridge between worlds. "Language is built of abstract sounds and forms, it's imprecise -- but it's what we have. Art is a language, too," and Grasso feels that art can be that kind of bridge -- between people, or between the concrete and invisible worlds. Another way he engages with the object/consciousness divide is the use of collage and assemblage. By incorporating found objects and autobiographical artifacts like old photographs or rusted tools, Grasso is both evoking and evading narrative. Deracinated from function or context, familiar objects and his own identity are equally drafted into the abstract universe he is mapping. 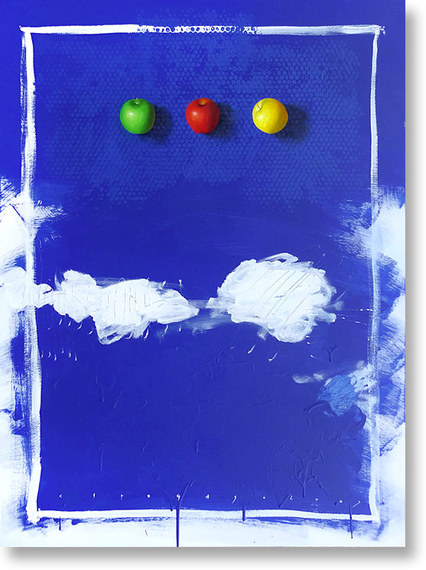 Perhaps the most art historically articulated evidence of Grasso's break/breakthrough are the white paintings, which are some of the most heavily assemblage- and collage-based compositions. The involvement of objects takes care of the representational element he likes to incorporate, without breaking the vow of the palette. He calls all of these self-portraits. Despite -- or perhaps because of, Grasso's radical stylistic shift, he finds a kindred spirit in 20th century avant-garde painter Kazimir Malevich, of 1918's "White on White" fame, who produced many similarly reductive works under the moniker of Suprematism. Not for nothing, these were almost entirely executed in red, white, and black. Malevich's whole thing about non-objective art had to do with creating just enough of a painting to make people stand still for a moment, but free enough of content or message so their subsequent train of thought was unfettered. Also not for nothing, but he got that idea from the Russian Orthodox icon paintings in his home -- whose dogma he rejected but whose hypnotic powers he respected, and which powers he felt resided in the palette, especially the red. He reduced them to non-objective essentials to prompt a more abstract, secular version of a spiritual experience. And finally, like Grasso he too went through the same rapid index of styles after his epiphany, cycling through all the avant-garde modes -- Impressionism, Cubism, Surrealism, etc. -- before finding his true voice. Like Grasso, when Malevich finally began speaking in that true voice, he said things like, "Everything which determined the objective ideal structure of life and of art -- ideas, concepts, and images -- all this the artist has cast aside in order to heed pure feeling. Suprematism did not bring into being a new world of feeling, but, rather, an altogether new and direct form of representing the world of feeling." Yes, that's it exactly. 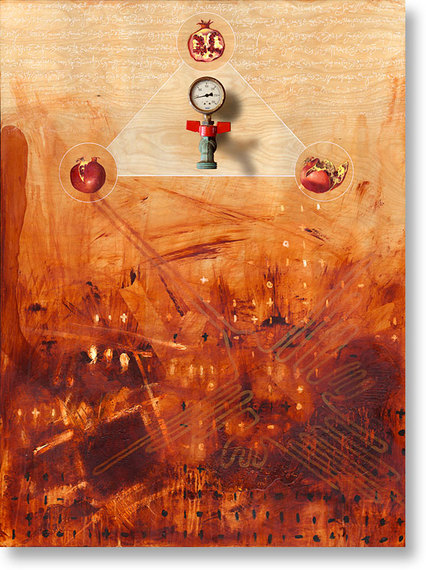 For more information on the artist, visit his website, and check out a short film about his work by Eric Minh Swenson on YouTube.