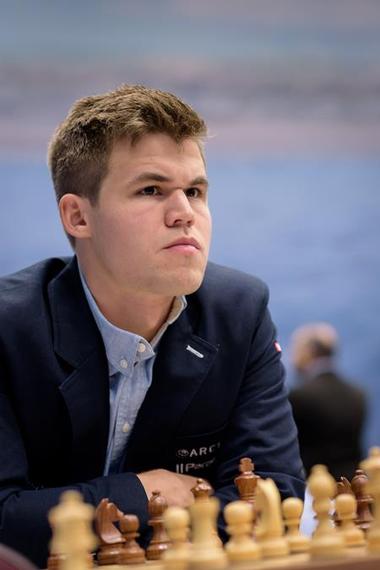 In the end, the world champion Magnus Carlsen, 24, emerged as the winner of the grandmaster group, but it wasn't easy. A group of grandmasters in their early twenties chased him all the way. Carlsen overcame a sloppy start with an incredible spurt of six straight wins. He slowed down somewhat, finishing with four draws, but nobody was able to catch him.

We expected last year's winner, the Armenian Levon Aronian, 32, and the American-Italian Fabiano Caruana, 22, the number two rated player in the world behind Carlsen, to fight for the top honors, but they didn't have a good start. Instead, four other young stars came through.

The Dutch grandmaster Anish Giri, 20, is the world's top junior and number six on the FIDE Rating list. The new American addition Wesley So, 21, is right behind him at number seven. The top Chinese player Ding Liren, 22, only drew three games and booked seven wins against the bottom players. And the top Frenchman and former World Junior champion Maxime Vachier-Lagrave, 24, had the best result in games among the top five. 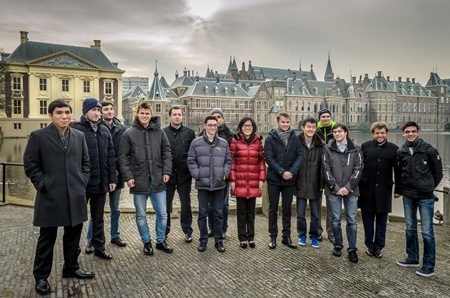 Amazingly, the rhythm of the tournament was set by the 46-year-old Ukrainian grandmaster Vasyl Ivanchuk. He took quick lead after six rounds with 4.5 points. His first game drew some questions. It looked like his opponent Baadur Jobava of Georgia resigned in a drawn position. 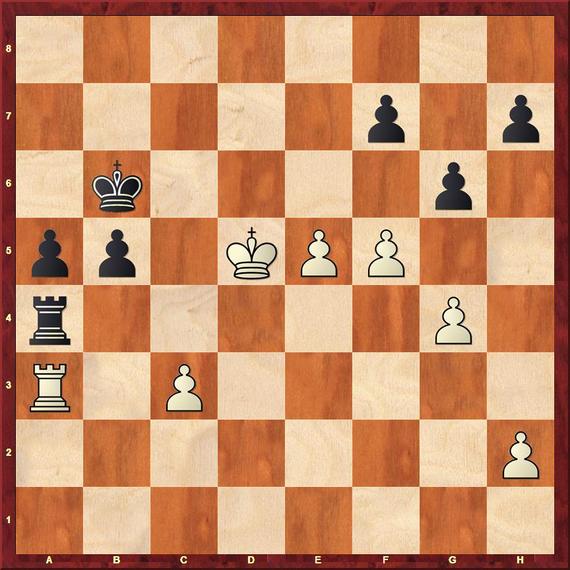 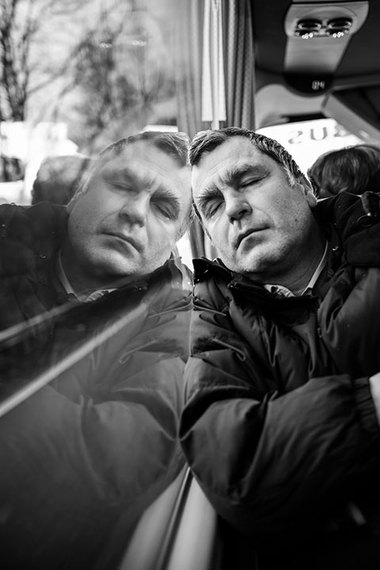 There were always two sides to Ivanchuk. On the one hand, his career was full of brilliant strategic plans, incredible combinations and astonishing tournament victories only to be followed by sudden blunders, unexplainable losses and lapses in his performance.

In 1991 Ivanchuk turned 22. We were talking about a new world champion after he outplayed all the world's best, including Kasparov, Karpov and Timman, and took first place in Linares. It helped him to the number two spot on the FIDE rating list.

However, in the summer of 1991 in Brussels, Artur Yusupov played his immortal rapid game and eliminated Ivanchuk from the Candidates matches. For the last two decades Ivanchuk has been one of the best players and together with Anand and Boris Gelfand - two grandmasters of his generation - refused to age in chess.

Ivanchuk was caught by Carlsen in round seven and in the next round faced Wesley So, 21, playing for the United States. Computers are one reason why the game is getting younger and So is the master of his laptop. He is so good that he became a coach of the U.S. team at the 2013 World Team Championship and 2014 Chess Olympiad.

"Wesley was extremely helpful," says the U.S. captain John Donaldson.
"He knows an incredible amount about opening theory, likes to work on chess all the time, has a pleasant manner and is willing to share." From now on, he will be playing for the U.S. team, perhaps even on the top board. On FIDE February Rating list So moves to number seven, the other American, Hikaru Nakamura, is number 10.

It seems So surprised Ivanchuk with a knight sacrifice in the delayed Marshall Attack in the Spanish opening. The Ukrainian just followed Aronian's analysis from his Candidates game against Anand. But it became clear that Aronian's analytical team unplugged the computer too soon, leaving the piece sacrifice undiscovered. Suddenly, there it was on the board, the work of number-crunching monster, too foreign to a human mind. And Wesley So knew about it. Giri and Carlsen were clearly interested in the game. 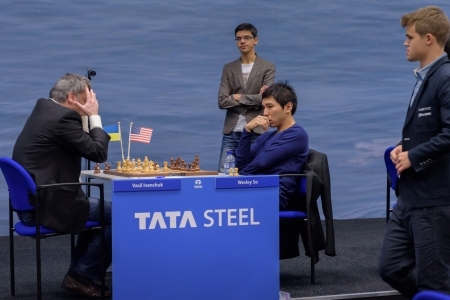 Levon Aronian's novelty, connecting the rooks and planning to bring the queen rook into play. 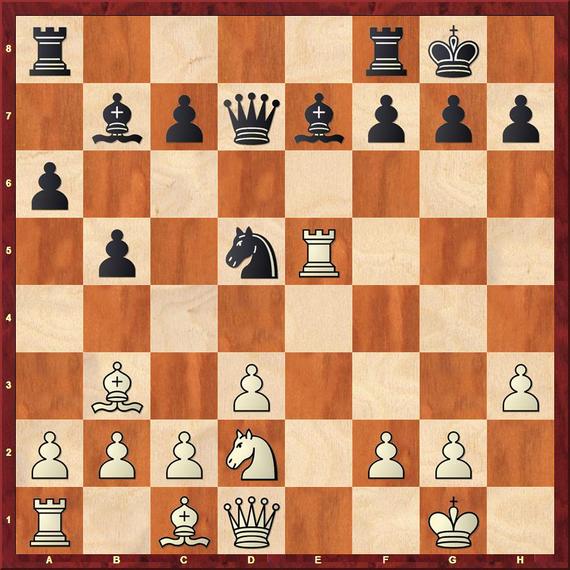 This knight leap is more in the spirit of the Marshall gambit and leads to a piece sacrifice. 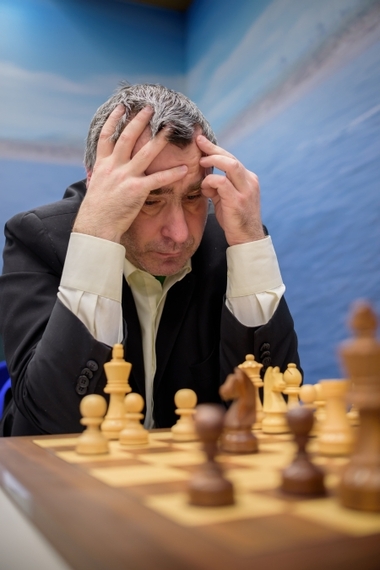 What do I do with the knight on f4?

The Dutch grandmaster Anish Giri pointed out this sacrifice in the third issue of New In Chess last year. It was picked up by a few players, but the credit goes to computers.
Komodo 8 suggest a different piece sacrifice: 14...Nxh3+ 15.gxh3 Bf6 16.Rh5 g6 with roughly equal chances. 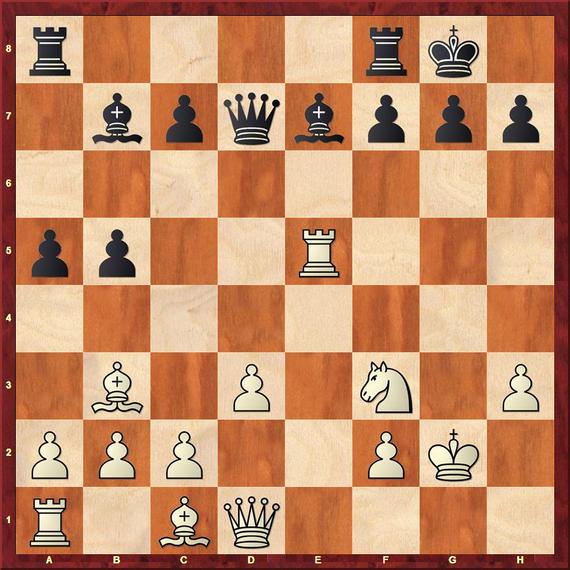 An amazing computer move. The threat to win a piece back with 16...a4 gives Black time to bring his queen rook to the kingside via the square a6. "Show it to Levon," writes Giri, " and the rest he would have managed by himself."

Ivanchuk decides to eliminate one attacking piece, but now the material is almost level and Black can still increase the pressure. Two other moves, 16.a4 and 16.c4, were already played.

It gives the impression the players agreed on the content beforehand.

The point of Black's combination. The threat is 18...Rf6. Ivanchuk pushes his d-pawn to block the deadly diagonal a8-h1, but it does not work. 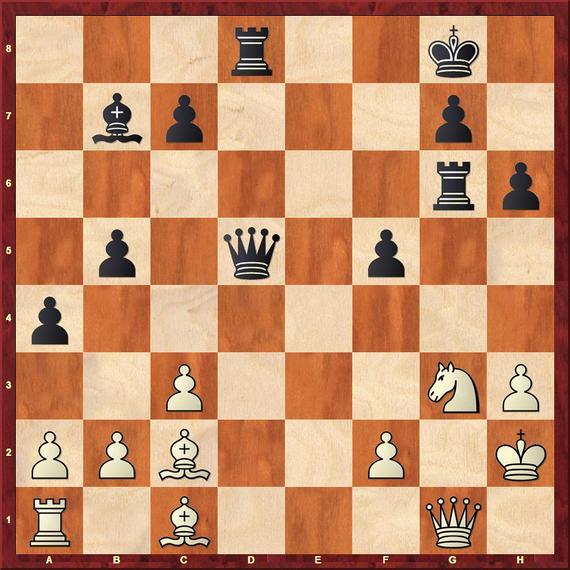 Black's position is overwhelming and So can finish the game with various sacrifices. He chose the quiet hammer.

After Ivanchuk's loss, Carlsen took the lead and was able to keep it till the end.

The 15-year-old Chinese whiz-kid Wei Li won the challenger tournament, a qualification for the top grandmaster group. Nobody could match his incredible result. The Chinese thought highly of him and included him in the gold medal team in the last olympiad.

Wei certainly has a bright future. Besides the high score, he also entertained the fans. 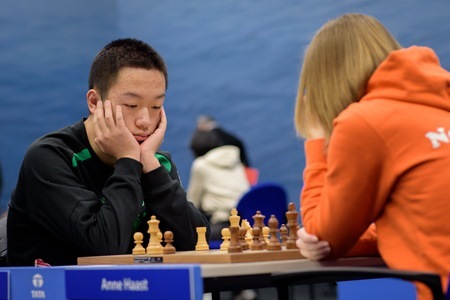 This variation of the Taimanov Sicilian has a lot of admirers. White quickly clears the first rank, preparing the long castling.

In connection with the next move, this plan scored well for Black. Wei does not believe in statistics: the black pieces will be pushed from the center. White will gain time and space. There is nothing wrong with the logical development 7...Nf6. 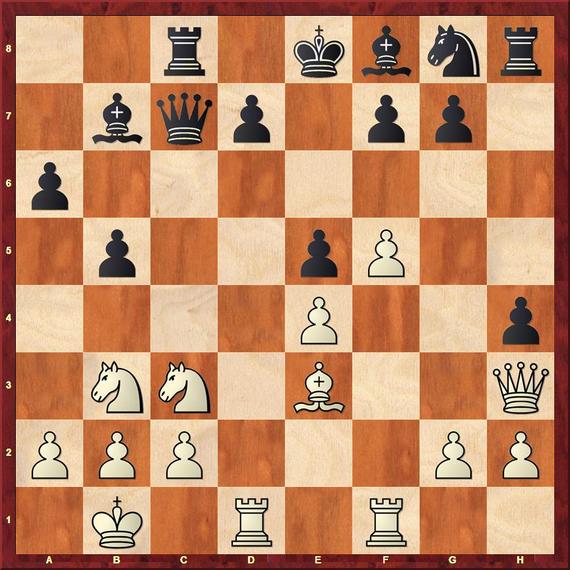 The pawn on d7 is covered by the Queen only and Wei finds a little combination to win material. 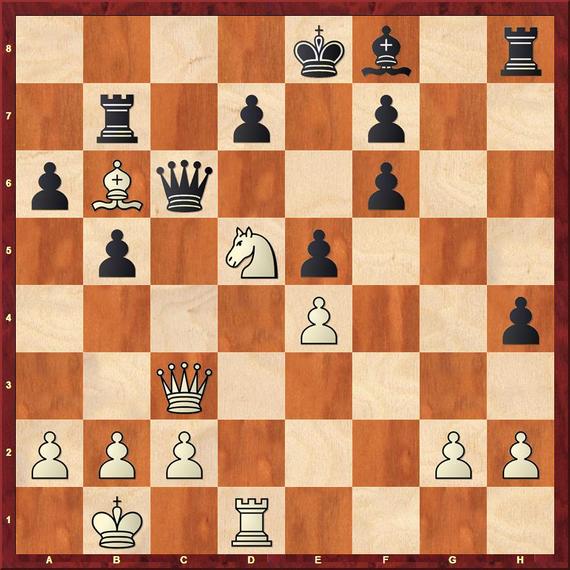 After 25...Kxd8 26.Qxc6 wins. But now the Queen returns to deliver a beautiful long-distance mate. 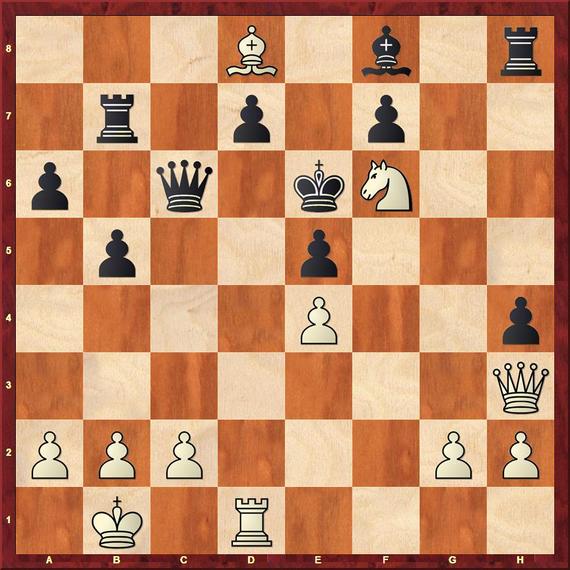 Undefeated with seven wins, David Navara, 29, didn't finish first. It only magnifies Wei's accomplishment. However, with his attractive play and high rating, the Czech champion belongs in the top group and I expect him to be there next year.

Navara produced some fascinating ideas throughout the event. One example is his miniature against Jan Timman, 63, who played one of the worst tournaments of his otherwise brilliant career.

Navara reversed the battery of Bishop and the Queen. The bishop acted like a slingshot shooting the queen into the enemy's position to take advantage of the weak dark squares. 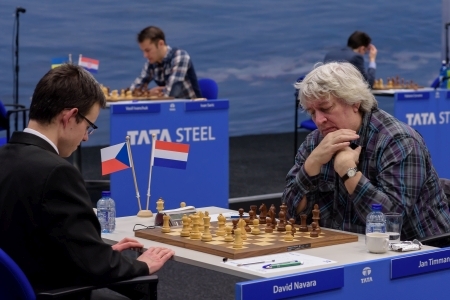 A novelty, preventing 11...Nc5 and leaving the d2 square for the queen. 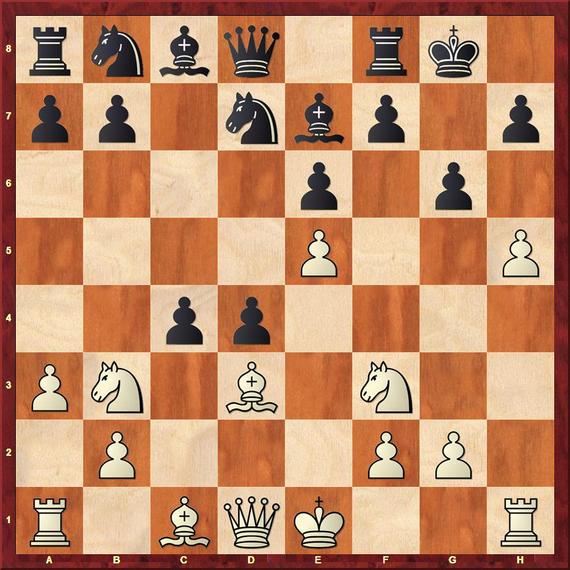 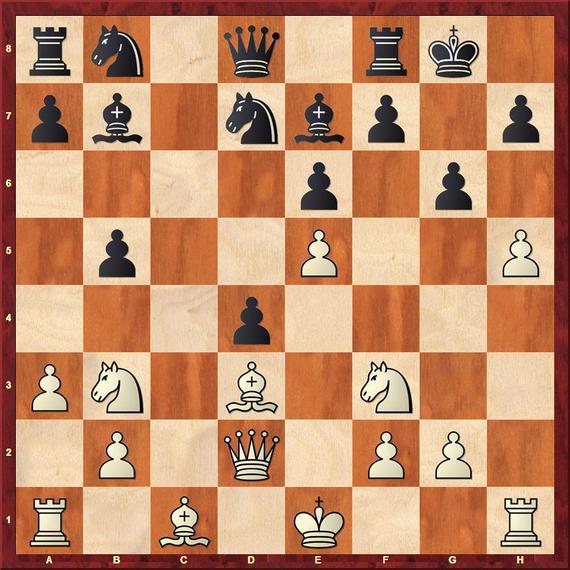 White shifts the B+Q battery to the right. Computers agree with this move. White's dark bishop is ready to catapult the white Queen to the square h6. The set-up of the Queen in front of the Bishop was seen in other openings.

Correction: The article stated that Magnus Carlsen is 22. He is 24. It has been corrected.