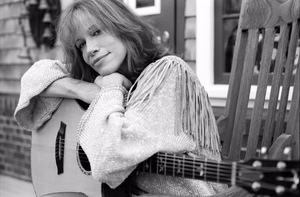 Carly Simon admits she's a bit of a recluse who goes through fads of eating certain foods for long stretches of time. She calls it her healthy little secret.

"It's been this for the past year and a half." She suddenly stops herself. "Well, do you want to know or is this not interesting for the interview," she asks sounding a bit embarrassed.

I hang on every word, eager to hear more. After all, it's not every day that Carly Simon calls and talks with you like you're old friends.

"It's plain yogurt. No fat. It's Fage," she says. "Then I put tons of pomegranate seeds all over the yogurt and agave over that."

Her excitement builds. "When you put it in the freezer for about an hour first it's kind of hard and never gets soupy with the pomegranate seeds and agave. It almost has this ice cream feel. I eat two whole, two-quart containers a day. Always."

That intimate glimpse into the singer's private life is one that didn't make it into her new, long-awaited and revealing memoir Boys in the Trees. It's close to noon, and Simon is relaxed. When she speaks she's enchanting and tender. She admits that one misconception about her is that she's shy. While she rarely performs on stage because she's uncomfortable to the point of anxiety in front of large groups of people, one-to-one she's at ease. That becomes evident when I mention her song "Interview" that I always dreamed of singing to her if we ever did, in fact, do one. Without missing a beat, she bursts into song.

"That was from a very eclectic, weird album called Spoiled Girl," she says. "I love a couple of songs on that like 'The Wives Are in Connecticut.' I hope somebody else will cover it. It's very theatrical in a way."

Many of her songs are. With lyrical-driven stories that have gone on to become anthems, Simon is one of the most prolific singer-songwriters of a generation. Whether she's singing about the loss of love in "It Happens Everyday," which she feels is the best song she's ever written, to the hope for it in "Anticipation," Simon's music has stood the test of time.

She was catapulted into the spotlight 44 years ago when "That's the Way I Always Heard It Should Be" hit the Top 10 and helped earn her the Grammy Award for Best New Artist. All these years later, she still gets a thrill when she hears her songs on the radio.

"I never say I can't listen to this," she says. "It's as if I'm hearing it for the first time. It's startling. I feel so happy, and there's that immediate sense of self esteem."

Growing up in New York City as the youngest of three girls, she struggled to find that self esteem. Her mother was in the midst of an affair with a man 24 years her junior she hired as a babysitter for her younger brother. Her father, co-founder of publishing house Simon & Schuster, never seemed to give her the attention or affection he did her siblings. That put Simon on lifelong journey to understand love. To complicate matters, at 7 she was molested by a teenage boy who was a family friend. It lasted for six years, and a naive Simon believed they were in love. It was just one experience that brought her to the conclusion that boys are bigger and stronger; a revelation that may come as surprise from the woman who has often been labeled a feminist.

"I've always thought that as long as something was bigger and stronger than I, I'm in a weaker position," she says. "How do we as women make up for it? We make up for it with our guiles. With our makeup. With our abilities to make men jealous. We learn ways. But if we're just our own, pure feminine selves and we're alone in the woods with a caveman who carries a bigger stick than we do, then we're at the mercy of the man." 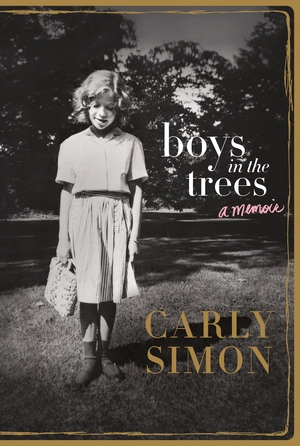 In 1972 Simon married singer James Taylor. Much of Boys in the Trees covers their rollercoaster relationship that ended in 1983. While time will tell if he is the love of her life, she admits he has an edge over everybody else since they have two children together. Her feelings for Taylor remain deeply rooted in her heart and mind.

"Both my second husband and everyone else that I've been involved with knows that I love James," she says.

Despite her unwavering love, Taylor has shut her out of his life. He doesn't allow their children to give his number to her, and she says he even avoided his mother's public funeral recently because he knew she would attend. Thoughts of what she'd say if their paths ever crossed is something that lingers in her head all the time. When she sees him on television she thinks, "I wish he looked happier." Like her relationship with her father, she's learned that she can still love him even if it isn't reciprocated.

"Some people would say that's loving in a vacuum, but do you love God in a vacuum? Does God always give you back the same affection you feel for him or her?" she says.

Beyond her children, she believes her legacy will be her willingness and ability to be honest. She's come to appreciate herself and has quieted, but not yet silenced "The Beast," the name she's given to her self-consciousness, fear and loneliness. She's also finding new ways to channel her creativity. In addition to playing music every day, her new passion is redesigning her old jewelry. She hopes to have her own line in the future. She's also enjoying painting, particularly pears and trees.

As Simon and I playfully sing various songs -- everything from "Better Not Tell Her" to "Tired of Being Blonde" -- I try to make our time together last, but I know it has to come to an end. Citing "The Right Thing to Do" I conclude our talk by singing the song's final line, "Let's close now."

Simon laughs and hums the instrumental fade. We say goodbye. It's time for Simon to have some more yogurt.

"Boys in the Trees" and the 2-disc companion album, "Songs from the Trees," are now available. For more on Carly Simon, visit www.carlysimon.com