Four friends took last weekend's 405 freeway closure as an opportunity to grab some dinner. On the highway.

Matt Corrigan, his wife Amanda, Barry Neely, and photographer Jesse Glucksman snuck on to the 405 freeway last Saturday before 6 a.m. near Sherman Oaks, reports The Hollywood Reporter. As for why they did it, Glucksman told The Hollywood Reporter, "How often do college educated professionals in their late 20s/early 30s get to do something so ridiculous?... I've got kids, man. I never have time to really have fun."

Over email, photographer Glucksman told the HuffPost how it all began:

[Matt Corrigan and Barry Neely] scoped out a stretch of road a couple days before and found a small area that was totally unguarded except for a fence, a steep hill of loose soil, a wall, cops in a helicopter, squad cars and construction workers. The three of them, including Matt's wife (and our fellow Emerson College graduate) Amanda set up the table while I shot away. It was less than a minute before a couple construction guys drove up and told us to scram and I literally only managed to get the one good shot.

HuffPost asked Matt Corrigan, who doesn't have any children yet, what he would say to his future kids when they stumble upon this photo. He says, "I don't really have a leg to stand on to tell them to be good, I guess. I have no idea. I guess we can tell them that we now have proof that their parents were cool at one point."

As for Stephen Estes, the guy who planked the 405 freeway during Carmageddon? Corrigan says, "Yeah, he should have had dinner."

Corrigan, a special effects artist, thinks that the 405 closure was a wasted opportunity for filmmakers looking to capture some unique shots or collect stock footage. "There are sections of the 405 that are very iconic," says Corrigan. "I think they should at least let film crew out there to shoot parts of the 405. At least."

But according to Corrigan, lawmakers and city officials have a chance to make it right in 11 months, when the 405 freeway closes again to tackle the second half of the Mulholland Bridge. "An event [on the freeway] would be pretty cool. Think of it from the state's point of view -- they've got to be able to make money on that," suggests Corrigan.

h/t Jalopnik.com for the exclusive. 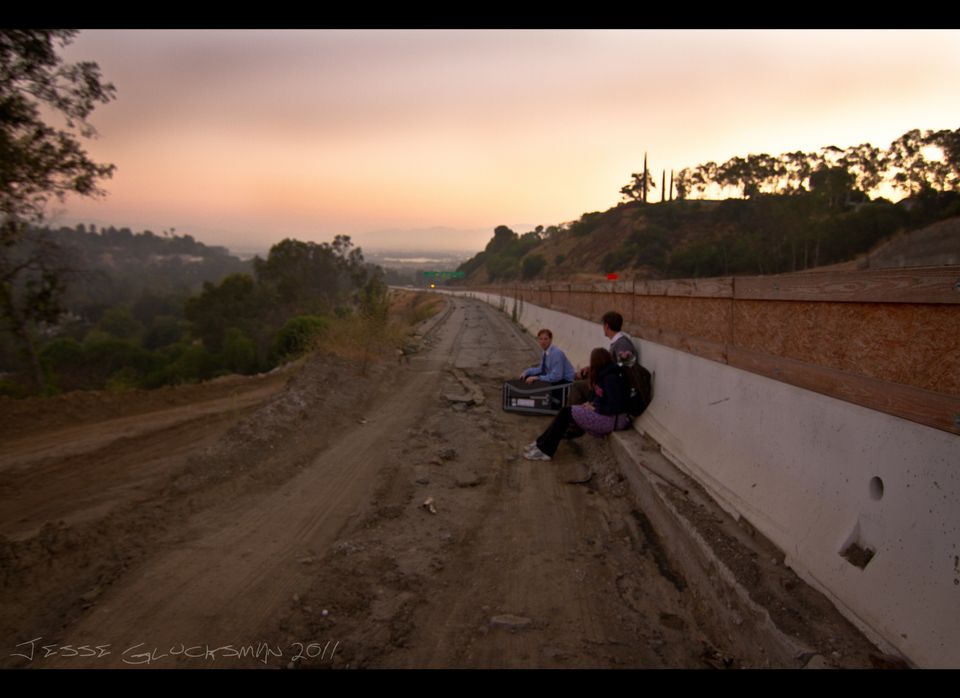