NBA star Carmelo Anthony took to Instagram late Monday, as tensions continued to escalate in Baltimore, urging protesters to "build our city up not tear it down."

"To see my city in a State of Emergency is just shocking. We need to protect our city, not destroy it," the New York Knicks player wrote.

Anthony's words come after days of unrest in Baltimore stemming from the death of Freddie Gray, a 25-year-old Baltimore resident, who died on April 19 from a spinal injury while in police custody. His funeral was held Monday.

Protests escalated over the weekend to such a degree that fans attending the Baltimore Orioles game were instructed to stay within the stadium on Saturday. Maryland Governor Larry Hogan issued a state of emergency Monday evening as rioters burned police cars and a pharmacy and threw bricks, the Associated Press reported. 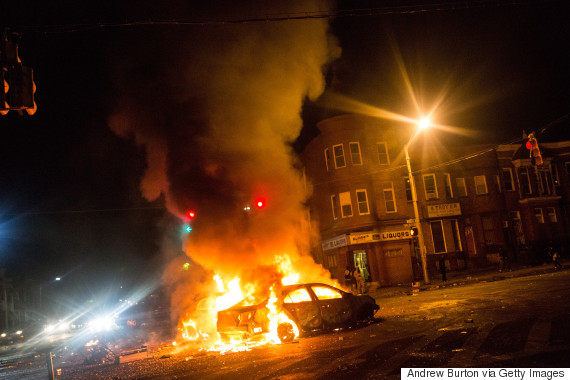 On Tuesday morning, the governor's office announced there were 144 vehicle fires, 15 structures fires and nearly 200 arrests, the AP said.

"Think about the youth. How this will impact them. Let's build our city up not tear it down," Anthony wrote in his post. "Although, we want justice, let's look at the real issues at hand. For example, When was the last school built in Baltimore? That's just one example."

Here is the full caption that accompanied Anthony's post:

We all want Justice. And our city will get the answers we are looking for. My deepest sympathy goes out to the GRAY Family. To see my city in a State of Emergency is just shocking. We need to protect our city, not destroy it. What happens when we get the answers that we want, and the media attention is not there anymore? We go back to being the same ol Baltimore City again. If not yourself, then Think about the youth. How this will impact them. Let's build our city up not tear it down. Although, we want justice, let's look at the real issues at hand. For example, When was the last school built in Baltimore? That's just one example. I know my community is fed up. I'm all about fighting for what we believe in. The anger, the resentment, the neglect that our community feels right now, will not change over night. Continue, fighting for what you believe in. But remember, it takes no time to destroy something. But, it can take forever to build it back up. Peace7. #Thisonehitshome #BeMore #LetsNotFallForTheTrap "Please Understand What State Of Emergency Mean"(Destroy and Conquer)#StayMe7o


Although Melo was born in in Brooklyn, his family moved to Baltimore when he was 8 years old. He calls it "the city that raised me," and, in 2006, he donated $1.5 million dollars to open the Carmelo Anthony Youth Development Center in Baltimore.

His posts echoes that of Orioles chief operating officer John P. Angelos, who defended the protesters from Saturday and pointed to larger issues at hand on Twitter.

"My greater source of personal concern, outrage and sympathy beyond this particular case is focused neither upon one night's property damage nor upon the acts group but is focused rather upon the past four-decade period during which an American political elite have shipped middle class and working class jobs away from Baltimore and cities and towns around the US," Angelos wrote.